What I learned talking to a Harvard-educated Zen Buddhist 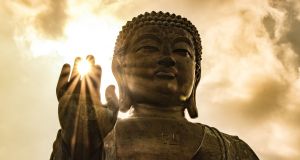 I had a telephone conversation with a Harvard-educated Zen Buddhist one morning recently, which was a first for me. Haemin Sunim is a teacher and writer whose words of Buddhist wisdom are readily accessible on Twitter (to his more than one million followers) and through his bestselling books, Love for Imperfect Things: How to Accept Yourself in a World Striving for Perfection and The Things You Can See Only When You Slow Down: How to Be Calm in a Busy World, which have sold about four million copies worldwide.

I’m not terribly good with self-help books, especially ones that offer guidance towards peace and contentment. It’s appallingly immature, I know, but as soon as someone suggests that I relax and let gratitude wash over me like a watery sun, I want to jump up and kick something. I get similar uncontrollable urges in the presence of fridge magnets that tell me to keep calm and carry on. And don’t even get me started on those laminated prints of dewy-eyed kittens supplemented by kooky, sentimental sayings that are supposed to pass for sagacity. (“Life isn’t purr-fect but it does have purr-fect moments” was one such example that recently made me want to rip out my own eyeballs and masticate them with lashings of piri-piri sauce.)

Only by accepting our flawed selves can we have compassionate and meaningful relationships with partners, family and friends

Given the above, I may not have been the most obvious candidate to receive a complimentary copy of Sunim’s latest book, Love for Imperfect Things, which has recently become available in translation. The premise of this collection of short essays and bite-sized insights seems to be that only by accepting our flawed selves can we have compassionate and meaningful relationships with partners, family and friends. Prettily illustrated, compact, easily readable, and applicable at one level or another to the lives of most of us, this new volume, I can only assume, will, like its predecessors, fly off the shelves.

I asked Sunim if he got tired travelling the world teaching and publicising his work. He told me that he didn’t get tired, that he always made time for meditation and spiritual practice. He is a man who lives in awareness, it seems, not in state of jet-lagged chassis.

When he’s not travelling, he told me, he’s based in his home city of Seoul, South Korea, where he founded the School of Broken Hearts, a place that gives practical application to his teachings by offering help with issues such as bereavement, illness, depression, divorce or bringing up a child with complex needs. In Sunim’s school, people are brought together in the same room to express their frustrations, fears and anxieties, with the result that loneliness dissipates.

Sunim’s aim, he told me, was to take the dharma beyond the temple and into the lives of those who need its wisdom most. I assumed that dharma meant cosmic law and order, but I was sitting on the kitchen floor and I didn’t have time to Google it, and the cat was no use, sprawled next to me on the mat and hazily blinking at the morning sun.

He suggested writing down three things a day to be grateful for (cat, rug, coffee, for example)

I felt churlish asking Sunim if people had to pay to go to the School of Broken Hearts. There are many programmes there, he told me, many ways to experience emotional and spiritual growth through working with Zen monks, psychologists and counsellors. Some courses are free, some not.

We talked then about gratitude. (I knew it would come up.) He suggested writing down three things a day to be grateful for (cat, rug, coffee, for example).

We talked, too, about the scourge of repetitive thoughts. I asked him if, like me, he lay awake at night, mind whirring through the usual carousel of dog-eared worries (climate change, new technology, political chaos, our children’s unknowable future, and so on). His response (and I’m paraphrasing wildly here, reducing the man’s learning into a couple of clumsy sentences) was that we didn’t have to give the same attention to all of our thoughts. On matters global, he advised taking responsibility for our actions and coming from a place of love; on parenting, he suggested showering our young with love and affection, then teaching them, too, to assume responsibility for their lives.

After we’d said goodbye and I’d put the phone down, I growled like a rabid dog at the supine cat. I’m cosmically simple that way, uncomplicated in my desire to scare the living daylights out of her while she tries to relax. She barely twitched a whisker.

Love for Imperfect Things: How to Accept Yourself in a World Striving for Perfection, by Haemin Sunim, is published by Penguin Life, £9.99