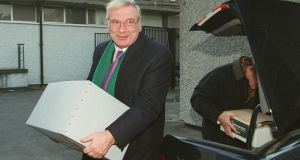 Garrett Cooney SC at the Flood tribunal: a large man with an imposing presence who prepared for cases meticulously. Photograph: Alan Betson

Garrett Cooney may have given up the boxing that had been his sport of choice as a young man, but he retained an air of menace in court that made him one of the most feared advocates at the bar.

Yet, it was not until his mid-50s that he achieved eminence and was acclaimed as our best defamation barrister since Ernest Wood. An early triumph in 1989 was to secure substantial damages from the Irish Press for Niall Andrews, a Fianna Fáil MEP, on foot of an article by Nell McCafferty that was found to imply that Andrews was engaged in practices that were distasteful and immoral.

Others for whom Cooney won vindication and damages in the next 15 years included politicians Austin Currie and Avril Doyle, journalists John Waters and Sean O’Rourke, art dealer James Gorry, hotelier PV Doyle, and the maligned prosecution witnesses in the Catherine Nevin murder case.

A large man with an imposing presence who prepared for cases meticulously, Cooney was an intimidating cross-examiner of opponents and witnesses. He was, colleagues noted, at his most threatening when he lowered his deep, powerful voice.

Although briefed by newspapers as well as plaintiffs, he opposed the media campaign to liberalise the law of libel, telling them bluntly to maintain standards and to stick to reporting facts rather than expressing opinions if they did not want to be sued.

Reputations were also on the line before tribunals and some of those impugned turned to Cooney. Albert Reynolds employed him at the Beef tribunal and had his integrity, if not his judgment, vindicated. At the Flood tribunal in 1999, Cooney was on a stickier wicket representing builders accused of giving bribes to get planning permission. “Gogarty leaves Cooney on the ropes” reported The Irish Times after a day when the barrister was thwarted by the verbose, meandering and sometimes disrespectful responses of his client’s whistleblowing former employee James Gogarty.

Cooney was drawn into bad-tempered clashes with the tribunal chairman Mr Justice Flood, his former pupil master, and other barristers in the case. It was uncharacteristic as the good-humoured, calm and reasonable Cooney had never been counted as quarrelsome by his peers.

Born in Longford in January 1935, Garrett Francis Cooney was the third son of Dr Mark Cooney, medical officer of health for Cavan – John Cooney, the renowned psychiatrist, and Fine Gael minister Patrick Cooney were brothers. Garrett followed them as boarders at Castleknock and then studied history at University College Dublin. He read law at King’s Inns where he was auditor of the Law Students’ Debating Society.

Called to the Bar in 1960, he joined the Midland Circuit. Born into a Fine Gael family – his father was an army doctor in the Civil War and his uncle by marriage was the chivalrous Gen Seán McKeon – Cooney became chairman of its central branch

Determined to show Fine Gael were as good nationalists as Fianna Fáil, he persuaded the 1971 árdfheis to describe Northern Ireland throughout as the Six Counties, an attitude, The Irish Times remarked, “that hardly reflects the new thinking on the North”.

Marriage in 1976 to Drogheda solicitor Sheila Gillian, followed by the death of their first-born infant daughter and a growing practice – he became a Senior Counsel in 1977– allowed less time for politics. He viewed with distaste the liberal lunge of Fine Gael under Garrett FitzGerald – Cooney was a devout Catholic so conservative in outlook that he preferred to attend Mass celebrated as it was before Vatican II.

This, as well as his marital status, made him solicitor John Jay’s unexpected choice in 1982 to represent David Norris in his action challenging the Victorian legislation criminalising homosexual conduct. Detachment was conducive to effective advocacy and the challenge failed only by the narrow margin of three to two in the Supreme Court.

In retirement after 2005, Cooney indulged his interest in rugby and, ever affable to all comers, played golf for sociability. Despite being a lifelong smoker, he enjoyed good health until months before his death. He is survived by his wife and three sons, the eldest of whom, also called Garrett, is a practising barrister.

Billie Eilish: Her stance that her body is not public property is still a radical act
7