‘Suicide ruins everything it touches. The painful legacy lasts forever’

Doireann Coady: Making theatre from an accidental recording of my brother Donal singing has helped me cope 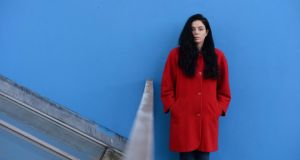 Doireann Coady: The minute I heard Dad’s recording, I started to make a show with Donal; a duet with me and the tape, on which he was so alive, sending me a message. Photograph: Alan Betson

I’m standing in a bar in Dublin, and an Irish music session has just come to an end. People are deciding where to go to next. A friend introduces me to a pal of his. At this stage, we have all had a few pints of Guinness, and there’s a good mood in the air. “This is my friend Donal,” my friend says over the moving crowd. I shake the young man’s hand. (I probably shake it extra hard.) This guy Donal is so full of life; he’s good-looking, with a glint in his eye. “What’s your name?” I ask, even though I definitely heard it the first time.

I find ways throughout the rest of the night to say this guy’s name – “Wait for Donal!” I scream as we cross a road to a bar in Portobello .

I hop on to the 37 bus, out on a visit to my family home. I see a tall, red-haired man in a pair of Snickers work pants. The man, tired from his day’s labour, stands and holds the handrail, absorbed in his own world. I stare at him, transfixed, because he looks very like my brother. I spend the whole journey gazing at his red hair and dust-covered trousers.

'Got any brothers or sisters?' someone asks me at a music festival. 'Eh, no,' I reply plainly

These are some of the things you find yourself doing in the years after losing someone. My brother Donal took his own life almost 10 years ago, on March 14th, 2009. As I step off the bus, I’m left with an eerie, gut-wrenching feeling, but one that has become all too familiar to me. It’s the feeling of knowing that you can’t call your brother’s name again, that you can’t see his trickster smile again and that you will never bump into him on the 37 bus again.

In the decade since my brother’s death I’ve become used to that feeling, and yet I’m still surprised by the things I find myself doing to mitigate it. “Got any brothers or sisters?” someone asks me at a music festival “Eh, no,” I reply plainly. Sometimes it’s just easier.

The full weight of this particular anniversary hit me recently, when I saw the 10-year challenge trend on social media, where people compare a photo from 2009 to one in 2019. I am now nearly seven years older than my brother was when he decided that this world was no longer for him.

In the year that I turn 30, I look back on the years since he died. The only permanence in those 10 years was his death. I was 19 when that veil of youthful naivety and optimism was whipped from my eyes and I experienced an utter collapse of meaning. Suicide ruins everything it touches, leaving a painful legacy that lasts forever.

As a theatre artist, the experience of losing my brother fed into everything I did. It shaped my total world view. In many ways it stole my 20s. Sometimes it made me a better person, sometimes it made me a hard person to be around,but ultimately it taught me about empathy, and brought my family closer together.

As the decade slipped by, the trace evidence of our shared existence has started to fade; the house is painted, a new kitchen was installed and the furniture of our childhood has been put in a skip. The house makes different sounds now that he is not here. The more I try to remember of this time, the more it recedes.

In 2014, my father, George, played me a dictaphone tape he had found of my brother singing while he was pottering around the house. I was blown away.

The recording begins with Donal singing How to Disappear Completely by Radiohead: “I’m not here, this isn’t happening, in a little while I’ll be gone.” I sat on the edge of the bed, quietly weeping. I told Dad to keep the recording safe. He put a label on it that said,“Donal singing”.

The recording was accidental. In testing this new gadget, Dad had inadvertently left it recording and captured Donal being his relaxed, authentic self; playing music on his computer, jamming and mixing, the tracks occasionally punctuated by his voice, his whistle. He is totally lost and locked into the moment. It’s an intense moment of private expression. The minute I heard this recording, I started to make a show with Donal; a duet with me and the tape, on which he was so alive, sending me a message.

Some people run marathons to turn tragedy into a sense of hope and to keep the memory of their loved one alive. This issue is deeply complex, and often we don’t have an intricate enough frame through which to talk about it. It requires a context worthy of its weight. I believe art can provide this context, so I made a piece of theatre with my brother’s music, his voice and his message.

Now I am asking audiences to do that with me too, to listen to my brother’s music, to look this death in the eye

When I began working on this show, a mentor said to me that if I was going to do it I must look it fully in the eye. So I did – as much as humanly possible – and now I am asking audiences to do that with me too, to listen to my brother’s music, to look this in the eye, to say his name with me and to understand that we have more in common with my brother Donal than we think.

I’m not in a bar any more, or on the 37 bus, but on a stage in Vancouver, Donegal or Dublin; I’m saying my brother’s name, I’m playing his music. I’ve created a space where we don’t have to push things away – even just for 70 minutes – and Donal is helping me do it. He has an important message to tell us.

We spend most of our time trying to push things away, repress painful memories and pretend even briefly that awful things haven’t happened. I shouldn’t have to do this show, but these are the things you find yourself doing when you have lost someone.

I’m Not Here by Doireann Coady is at Project Arts Centre in Dublin next Friday and Saturday, February 1st and 2nd