Russell Brand: You’re not a spiritual maverick, you’re a stereotype 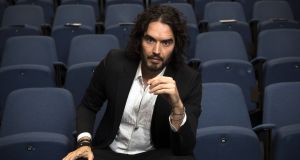 Russell Brand: “I’m very focused on the mystical connotations of Mabel’s beauty and grace. Not so good on the nappies.” Photograph: Carl Court/Getty Images

I didn’t give my children any breakfast this morning. I didn’t pack a lunch, wash a face or drive anyone to school. Instead, I just channelled Russell Brand, and busied myself by marvelling at their beauty and grace.

The self-styled revolutionary –  and man most likely to be described as a “dandy highwayman” in interviews –  has revealed that he is too “sensitive and awake and aware” to do anything so dull and predictable as change a nappy, or feed one of his two children.

Brand has spoken a lot over the years about how compulsive and addictive his personality is; how he has battled demons including crack, heroin, self-harm, sex, food and attention; how he never does anything by half measures.

Except, apparently, this –  the cut and thrust of being a parent. The hard, boring, lifesaving bits.

In the interview with The Sunday Times, Brand said that fatherhood grounded him and was “the perfect antidote to thinking ‘Oh God, I’m magnificent’.”

Was it really though, Russell? Because when he was asked by interviewer Decca Aitkenhead the longest he’s ever looked after his two children (Mabel (2) and Peggy (6 months)) alone, he seemed slightly taken aback.

Russell Brand embodies brocialism. Wants credit for being all woke and sensitive while still expecting the women in his life to do the actual work.

— what will grow crooked you can't make straight (@portraitinflesh) January 20, 2019

Russell Brand pitching himself as some New Age, all new, mature and sensitive dad - and then saying he’s too sensitive to do any actual parenting is the most Russell Brand thing I’ve ever read in my life pic.twitter.com/T0KSObnWXo

He was asked if he’d ever spent 24 hours in sole charge of his two children.

“No. She wouldn’t go away for 24 hours, Laura. She respects and cares for their safety too much. Yes, I’m very, very focused on the mystical connotations of Mabel’s beauty and grace. Not so good on the nappies and making sure that they eat food.”

It’s one thing confessing that you don’t do much of the caregiving or responsible, practical parenting stuff. It’s another to make it sound like it is a virtuous lifestyle choice, a side-effect of your depth and thoughtfulness.

But this is Russell Brand, and he is nothing if not terribly pleased with himself. He is simply, he goes on, too much “of a romantic and reflective and, possibly, to give it its proper name, a religious disposition” to be dealing with all of that “pragmatic, bureaucratic, managerial stuff.” Instead, he fills his days with prayer, meditation, writing, Brazilian jiu-jitsu and, you know, plotting the revolution.

Luckily for him, his wife, Laura Gallacher, “is extremely well-versed in the nuances and complexities of child-rearing… able to sustain and maintain domesticity in a way that’s astonishing.” A cynic might point out that she probably hasn’t had much choice.

Other high-profile men have occasionally bragged that they don’t do much by way of childcare. Jacob-Rees Mogg has claimed that he “has six children but has never changed a nappy”. A few years ago, Ryanair boss Michael O’Leary – who claims to be driven “mad” by paternity leave – said he didn’t make a habit of changing nappies. “Can I change nappies? Yes I can. Do I volunteer? No, I don’t. Do I do night feeds? No, I don’t. I work hard and Anita looks after the kids generally, but if I need to do something, I just do it. Am I volunteering? No, I’m not made to be minding children.”

But at least they have the self-awareness not to try and pass this off as evidence of their hyper-sensitivity and quest for spiritual fulfilment. Brand’s remarks wouldn’t grate so much if they weren’t so at odds with his carefully crafted (across multiple platforms, from YouTube to books to speaking gigs) persona as a kind of maverick, mystical messiah, intent on making us laugh and appealing to the better aspects of our nature. Both of which, to be fair, he is capable of doing.

As the outraged reaction online attests, there’s nothing brave, revolutionary, woke or different about shirking the hard, grinding, exhausting bits of being a parent. Men have been doing it for generations. Many of them are still doing it.

Even in the most developed democracies, women continue to shoulder most of the burden of domesticity, despite often juggling a salaried job as well. An EU report published in 2017 found that almost 90 per cent of women in Ireland do housework, compared to less than 50 per cent of men, a gap that has remained the same since 2005. Similar inequalities exist right across the EU, with the smallest gap in Sweden, where 56 per cent of men and 73 per cent of women undertake housework there every day.

Russell Brand wants to have his vegan gluten-free cider apple cake and eat it – he wants to be seen as woke, right on and searching, but he expects the woman in his life to know her place, while he gets on with the important business of saving humanity. Every so often, if she’s lucky, he’ll throw her a crumb about how astonishingly domesticated she is, interspersing this praise with reminders of his own incompetence, lest she get any notions of having, say, a night off. You’re not a spiritual maverick, Russell Brand. You’re a centuries-old stereotype.

No children were actually harmed in the making of this article.