Hilary Fannin: Jeff and MacKenzie Bezos have separated after a ‘long period of loving exploration’. I might be available. Just saying 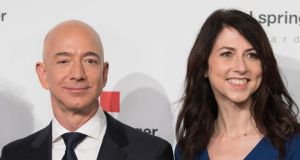 I’ve been reading, with something approaching interest, about the divorce plans of the mind-bogglingly wealthy Amazon founder and chief executive, Jeff Bezos, and his wife of 25 years, MacKenzie Bezos.

As has been widely reported, the couple announced their parting by saying that “after a long period of loving exploration and a trial separation”, they had decided to divorce.

Using language as a lubricant to slip deftly out of the cold grip of acrimony, much as one might utilise a fistful of Swarfega to loosen a tricky piston, the couple absolved each other of tacky culpability and renounced any sordid recriminations.

Without rancour or peevishness they were then free to divide up their billions, chop the Pomeranians in half and split the set of coasters, depicting scenes of Parisian street life, that blousy old Auntie Anne had given them for their nuptials a quarter of a century ago.

What does a “loving exploration” of the problems within a marriage (one that ultimately ends in divorce) look like, I’ve been asking myself. What exactly is “loving exploration” and does one have to have an awful awful awful lot of money in one’s porcelain piggy bank before being able to contemplate such a delicate and demure disentanglement from a spouse?

“Could you pass the keys of the private jet, darling, I have an appointment with a guru in Bangalore to help me detox from the noxious consequences of living with you and your adenoids and your peculiar, if not downright disturbing, use of cornflakes.”

“Why, of course, pet, here they are! Now why don’t you take yourself and the aircraft and your sagging backside and your rejuvenating enemas and that superior shagging smirk you have on your face and deposit the lot where the Malibu sun don’t shine?”

They’re all at it, the jet set, they’re all breaking up and making up with impunity and the discreetly professional services of a well-paid law firm.

Your friend and mine, the lissom Gwyneth Paltrow, and her former squeeze Chris Martin – the couple who famously lifted their pretty heads from their egg-white omelettes long enough to coin the phrase “consciously uncouple” when their union had run its course – have recently returned from Paltrow’s honeymoon together.

According to the trash I read when I’m supposed to be writing trash of my own, Martin accompanied Gwynnie and her new husband, Brad Falchuk, on their post-nuptial travels to an exotic island where the seas are turquoise and the sand is white and where the only bitter taste left lingering in the mouth is a lemon twist in the Sapphire Martinis.

Apparently Martin brought his new partner too, though don’t ask me what her name is, I can’t remember. There’s a point when very beautiful young women all merge into one another like a colony of Sindy dolls left too close together on the scorching hearth.

Anyway, given all of the above, one might be forgiven for thinking that it’s a hell of a lot easier to have a civilised relationship with an ex when you’re not skint and stressed out of your mind wondering if they’re going to come up with the child support.

Speaking of money, I had thought (briefly, let me stress) that I might dig out my Sloggi pants, slaver a bit of lanolin over my dry mouth, splash some 4711 on my neck, get my wrinkled ass on a plane to California and investigate the possibility of a loving and financially rewarding (for me anyway) union with the soon-to-be-single Mr Bezos.

I mean, why not? You only live once and, purely for the purposes of research, a billionaire lifestyle could be very instructive. I could learn to balance in Louboutins and bathe in Cristal champagne.

I could buy vials of fur oil in Paltrow’s pop-up shops. I could commission inexplicable art, patronise sewing circles and become known worldwide for my philanthropy, my generosity, my human hair extensions and my glittering laugh. On second thoughts, maybe I’ll stay home and watch reruns of The Riordans.

What was I thinking though?

I’d completely forgotten that I’m well over 50 and, as the male French author Yann Moix recently pointed out in rather blunt terms, women of my vintage don’t really exist when it comes to sex and allure.

Us quinquagenarians are far too busy bleaching the toilet in our sweatpants to consider the possibility of joie de Moix, aren’t we?

And, fortunately, we’re not young and impressionable enough to mistake cheval-shit for wisdom either.