Motherhood immediately made my anxiety much worse, and eventually much better 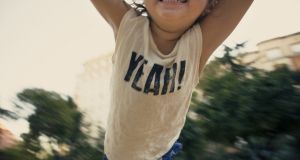 Say yes to that thing. You’ve got the rest of your life to be busy or tired or hungover.

“Learn how to say no” is one of those useful pieces of life advice you hear bandied about a lot at this time of year, when we’re all deep in the knit-your-own-hemp, wash-your-chakras-in-glacier water, self-improvement zone.

I used to be outstandingly good at saying no. I said no a lot more than I said yes, particularly to things you’re supposed to say yes to, if you aspire to having “dynamic professional” on your LinkedIn profile. I said no to doing presentations, speaking events, travel, job offers. I said no because I was away or busy or had other commitments. “I’d love to, but I can’t,” was, for a while, my default response to everything.

I never said no because I was afraid, even though that was the truth. I didn’t want to wake the Rottweiler.

Churchill had his black dog; I had my Rottweiler, the anxiety that had been snapping at my heels or dozing at the door since childhood. I tiptoed around it, fed it regularly, and hoped it would leave me alone.

For years, that meant I avoided situations that I knew would make me feel stressed. Not social events – I’ve always loved a bit of awkward small talk. It was work opportunities I balked at, especially the kind where I had the chance to mess up spectacularly in front of a large audience, and say something that would render me instantly and permanently unemployable. Or freeze and say nothing at all.

Sometimes, I even managed to talk myself out of opportunities that hadn’t yet come my way. I’d never do that, I’d tell myself, looking at someone I knew achieving something brave or brilliant. I kept myself safe and small and held the Rottweiler at bay.

Motherhood immediately made my anxiety much worse, and eventually much better

Then I had children: two in 18 months, one of whom was born too early and was terrifyingly tiny, the kind of baby whose size people feel compelled to measure in bags of sugar (he accounted for less than two). The insurmountably difficult, or so it sometimes seemed, task of keeping them both alive was a brilliantly useful lightning rod for the anxiety. After years of dealing with imaginary fears, it was a relief to have been handed one – two, in fact – concerns that were so pressing and urgent. Motherhood immediately made my anxiety much worse, and eventually much better.

As the sugar baby stretched to four bags, and then six, and then we stopped measuring him in baking ingredients, I noticed that the Rottweiler seemed to have diminished. There was no great moment of revelation. My anxiety just receded. Maybe it was the sense that I was doing alright at the most important task I’d ever been set. Maybe I was too busy and tired to waste energy worrying about what people thought of me.

I talked about some of this at an event I was at recently, the launch of a book called The Burnout Solution, by Siobhan Murray. I was asked to launch it, and I said yes. These days, I’m good like that.

I talked a bit about the Rottweiler, and how having children helped my anxiety, and how when I moved to Silicon Valley in my late 30s, I found myself deep in a culture that venerates stress; that regards being on the verge of burnout as a sign of commitment. (Only ever on the verge, mind you. Actual burnout, on the other hand, is a sign of the most catastrophic weakness.)

There was a woman in the audience who I noticed nodding along in recognition at parts. Afterwards, she came up to talk about the pathological stress of corporate life in America, though, she added, she lived in LA, where people know how to have a good time. She mentioned she was in the movie industry, at which point I politely failed to bat an eye.

I have met enough people who live in LA to know that everyone who lives in LA is “in the industry”. If imposter syndrome is part of the Irish psyche, the national condition for Californians is the Clooney-Ford effect, the delusion that you’re on the verge of being discovered, like George Clooney or Harrison Ford. Casually mentioning that you work in the industry when you work at, say, a wheatgrass bar on Hollywood Avenue, is a common manifestation of the Clooney-Ford effect.

It was only when I brought up the movie Titanic, and she mentioned she once co-owned a boat with James ‘Jim’ Cameron, that it occurred to me that perhaps she wasn’t a wheatgrass barista. The realisation probably showed in my face, because she remembered a pressing dinner appointment not long after. We exchanged emails, and I had her Googled before she got to the door. Let’s just say she doesn’t “work in the industry”. She works in the industry. Her husband practically is the industry.

So here’s my contribution to knit-your-own-hemp season. Don’t feed your Rottweiler. Say yes to that thing. You must have something to wear. It doesn’t matter that your hair’s not done. You’ve got the rest of your life to be busy or tired or hungover. Awkward small talk can be glorious.