Disgust is a trendy, complex and fascinating area of psychological research 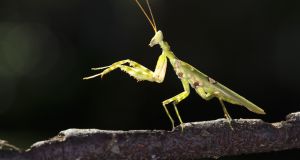 I met an orchid mantis this week. As you do. Native to Malaysia, Thailand and Indonesia, it is a predatory insect that looks unsettlingly like something from another planet. You’ve probably seen pictures of its relative, the praying mantis, which is a green, sticky looking thing whose reputation for murder precedes it. I’ve never met one of those.

Viewing insects more with horror than interest, I don’t go about making their acquaintance. I still haven’t recovered from putting on a  jumper one September (notorious sex season when spiders come out to show one another the shapeliness of their many legs) and finding an enormous spider inside as soon as I’d put my head through. I shook off the jumper and the spider both, running from the room and emitting a high-pitched keening sound that gestured inadequately toward the abject horror I actually felt.

I hadn’t intended on meeting this orchid mantis either. When I came back to Dublin recently to stay with a couple of old friends, one of them had this unusual pet in an enclosure in the dining room.

The orchid mantis - her name, if you’re interested, is Chronenburgetta; at least that’s her given name, mantises mostly murder one another when they meet others of their kind, so I don’t know that they’re in the practice of assigning one another monikers – is one of the most fascinating creatures I have ever seen.

Chronenburgetta looks, as the ‘orchid’ name might suggest, uncannily like an orchid – her strange skeletal body has a powdery white hue with stemmy green accents across her middle and creamy yellow markings across her abdominal area, and has the waxy looking texture of the robust, spongy flowers the insects are named for.

She is an ‘aggressive mimic’, who sits about temptingly waiting for flying insects who are drawn to flowers. She features the strangely long, searching forelegs of other mantises, but in white, and her four other legs have broad, flat, petal-like features. She can’t hear, because she doesn’t have any ears, and she breathes through her stomach, both of these are features she shares with a nun who taught me religion at secondary school. If she makes it to maturity, she will live for about nine months in total.

Every three days or so, my friend will feed her a live cricket or fly, and she, this elegant, alien, prim floral creature, will snatch it from the air at impossible speed with her branching forelegs, and slowly, monstrously eat it alive.

Disgust is a currently trendy and fascinating research area in psychology. There are established correlations (but not necessarily causation) between political conservatism and a likelihood to feel disgust more easily, or, for the sake of balance, between political liberalism (in the left wing sense) and being less easily disgusted by something like, for example, a messy bedroom.

In reality, though, disgust is more complicated than that – which is why many psychologists are conducting such interesting research into it. Sometimes, awe or fascination and disgust are almost indistinguishable from one another. The veil that flutters between the two can be so insubstantial that even as you look at something, feeling overwhelmed and utterly engaged, you are unsure whether you are experiencing disgust or an overwhelming sense of rapt engagement. You might feel this way when you see a bad or gruesome injury. You might feel this way when you see an orchid mantis.

Chronenburgetta is a living embodiment of the arbitrary cruelty and beauty of nature, of the things that we cannot understand, and of our own intense vulnerability in the universe. She is sublime and nightmarish, elegant and skin-crawling, merciless and spectacular. She is beautiful and cruel, or maybe ambivalent. Over my two day stay with her human keepers, I kept returning to her little enclosure – a warm, humid glass case with detritus at the bottom and a faux pink orchid protruding from it. Inside, she was alone, unknowable, impossibly still and deeply unsettling, like a creature from a child’s darkest imagination or the most beautiful flower you’ve ever seen. It depends, I suppose, on how you look at it.