Burnout: a slow dissolution of the tether that attaches you to the moment

Sometimes there’s not much different between burnout and boredom 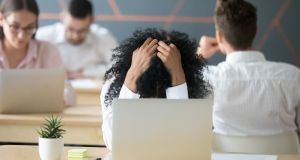 ‘Burnout doesn’t have to be dramatic’. Photograph: iStock

A friend of mine is a professor at a good university, and recently told me that a student came to see her in tears to ask for an extension of her essay deadline. “I can’t get my essay in on time,” the girl wailed. “All the coursework and the deadlines. I just know it’s giving me PTSD.”

My friend told me she – a seasoned academic who over the years has seen and helped many students with legitimate, diagnosed physical and mental health issues navigate their academic commitments – was so astonished by this display that her reply fell out before she could censor it. “PTSD? You mean the thing soldiers get after they watch their friends die?” The girl, oblivious, nodded sincerely. “Yes exactly,” she said, drying her tears. “So, my extension? I was thinking you could maybe give me a couple of extra months to finish the essay?”

The silence stretched out between them. “I’ll give you till next Thursday,” my friend said, baffled. “Cool!” the student replied, bouncing merrily from the office without so much as a “goodbye”.

This sort of nonsense is what I used to associate with the concept of “burnout”. Not quite a good old-fashioned traditional nervous breakdown – a condition with which Irish people are thoroughly acquainted – burnout always struck me as a sort of medical exhaustion false flag; the type of thing you could avoid by trying quite hard and being more honest with yourself. In proper Irish tradition, wouldn’t you have the decency to push past mere “burnout” and go all the way to a nervous breakdown? Wouldn’t you really work yourself and deny yourself right into the ground before you had the audacity to say “I need a change, or a bit of help, actually”? Rub some dirt on it and keep going.

The girl in the story doesn’t sound so much like someone with burnout as a potential sociopath, too busy skinning kittens alive and telling small children their drawings lack perspective to suffer anything vaguely like burnout, but that doesn’t mean it isn’t real.

Burnout is indeed a real thing, and is probably a step on the road to a full implosion of something load-bearing within us. If a breakdown is a total cessation of one’s ability to continue as before, then burnout is a slow creep; a maudlin drift out of our own lives even as we continue the routine. Perhaps most centrally, burnout is a sort of creative atrophy.

I don’t mean “creative” in a flowery sense either, as though suddenly your watercolour paintings of dogs in Sunday hats lack “dazzle” and your Etsy shop suffers as a result. No. I mean “creative” in terms of our ability to produce – ideas, work, energy, interest in the things around us; bringing into being something that we cannot generate when we are miserable, exhausted and disconnected from our lives.

Burnout isn’t always a dramatic, climactic ripening of all the stuff you’ve pushed through and the repetition you’ve tolerated. People tend to think of it, if they think of it at all, as a dramatic breakdown, something that can be seen from the outside. Like Nietzsche’s break in Turin, only with less (alleged) horse hugging.

But burnout doesn’t have to be dramatic. It can just be a slow dissolution of the tether that attaches you to the moment, so that you float – rudderless, maladjusted, never-quite-connected – and cease to pay full attention to your own life, operating on some lower, more basic plain, in which you do not engage in any thought about why you are doing what you are doing at all. You simply “do”.

The irony is that people like the student who asked for the extension – the people who will warp reality to make more room for themselves to comfortably do as they please – are probably less likely to quietly propel themselves toward burnout. Routine can be a vortex, inhaling hours and days so that months or even years have passed before we realise that pushing isn’t working any more.

A closing year inclines our thoughts toward a more stark assessment of our lives – now is as good a time as any to think about it. There’s sometimes not much in the difference between burnout and what feels like boredom, or ambivalence.