‘I’m not asking for money. I just want to work. I think I deserve an opportunity’

New to the Parish: Ariana Loyo arrived from Venezuela in 2013 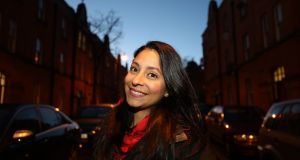 Ariana Loyo was 11 years old when her family moved to the Venezuelan slum of La Vega in Caracas. Having spent the first decade of her life in her father’s home in the city of Los Teques, Loyo’s life transformed when her parent’s marriage split up.

“We used to have money but then they got divorced. My mum hadn’t studied so we had to depend on my grandparents and my dad disappeared. There were nine of us living in the same house and I shared a bedroom with my grandmother, my mum and my sister. Four people in two beds.”

Life in the streets of La Vega was dangerous, with frequent shootings in the slum. Loyo regularly saw drug dealers patrolling the streets with guns and quickly learned to hide her belongings in her coat when leaving the family home. Had it not been for the local American school, her life might have been very different.

She remembers her mother begging the administrator of the Christel House NGO to include her daughters in the group of children sponsored to attend the school. “The school was for poor people – basically they gave us our school uniform, food, money for transportation, all our amenities. They helped us with everything we needed.”

A few years later Loyo secured a scholarship to study foreign trade at the Simón Bolívar University in Caracas. “It’s one of the best universities in South America and really famous. But it was a totally different environment to the slum.”

Surrounded by students from wealthier families, Loyo lied about her background. “It was a shock – this college had fancy people who had travelled around the world. I felt ashamed to say I came from the slums so I changed the location of my home. I pretended to be different and that I had money to buy nice clothes. I avoided telling people the truth. If people see you come from the slum and you’re poor they’ll treat you differently. I preferred to avoid that.”

After graduation she worked for a few years before saving up money to move to Trinidad and Tobago to learn English. She spent a year in the country but had to return home when her visa expired. In her absence, Venezuela’s economic situation had deteriorated dramatically while violence in the streets was becoming increasingly problematic. Loyo found a job but was eager to move abroad again. She started saving and in 2013 bought a ticket to Dublin to study English for a year.

“When I came to Ireland I didn’t like it at first. It took me three years to properly settle down.” Loyo spent her days working as a cleaner in the mornings and learning English in the afternoons. She shared a room for more than five years but eventually, earlier this year, decided to find a house with more privacy. “Having a single room in Dublin is so expensive so I had to sacrifice going out to have it. But five and half years of sharing is too much. Maybe I can’t go out very often but I need my space.”

Many of Loyo’s friends back home believe that because she lives in Ireland, she earns a lot of money. “The longer I stay here the more people have the wrong idea. They think because I’m living abroad I have a fancy life. But it’s not true.”

In July Loyo secured the 1G visa, which allowed her to stay in Ireland for six months after graduating from her degree in business at CCT College in Dublin. She has sent hundreds of CVs to companies but has yet to find full-time work. “I’m looking for any kind of job – recruitment, administration, accounting. But companies always ask for the stamp 4 or European citizenship. There’s a lack of information about the 1G visa, people don’t know you’re allowed to work on it.

“Immigration has told me this is my last visa and after it finishes I have to leave the country. But where am I going to go? I can’t go back to Venezuela, the situation is too serious there.”

Loyo worries if she returns home her family will be unable to survive without the monthly remittances from Ireland. Despite only ever working part time, Loyo has always sent money home. At first it was just her mother but now she supports other family members including a cousin suffering from cancer.

'I want to get the stamp 4 and a good job, save money and visit my family. I’d like to bring my mum here to visit. And I’d like to enjoy my money'

If she does return home after six years in Ireland, she also worries that people may take advantage of her situation. “People think I have money because I’m earning in euro. It could be a risk for my family. I miss them a lot and they miss me but they don’t want me to go back. And I’m afraid to go back there. I could apply for asylum but I won’t be able to work for nine months and how would I help my family? It’s my last option.”

Reading the news and speaking to family, Loyo often feels a sense of guilt about her life in Ireland while so many are suffering in her home country.

“I know my family can’t have the things I have. Every time I enjoy something I feel guilty and that I should send more money to Venezuela. At the same time my family approve of me being here, they know I worked really hard. No one in my family had gone to college before me. I was the first to go to college, the first to learn English and the first to live abroad.”

While she continues working part time as a hotel cleaner, Loyo hopes to find a full-time position before her visa expires in April. She also runs an Instagram account called thesungreen about healthy eating to keep busy and avoid feeling stressed.

“I want to get the stamp 4 and a good job, save money and visit my family. I’d like to bring my mum here to visit. And I’d like to enjoy my money. When you work part time you have to count every cent and think before you spend anything. That’s not life.

“I don’t know if I’m ready to leave this country. I think after six years of working part time, paying all my taxes, paying expensive rent and sharing a room I deserve an opportunity here. I’m not asking for money, I just want to work.”

I was 30 weeks and two days pregnant. And in labour
10