Michael Harding: After a Niall Breslin podcast recording, call to prayer made sense 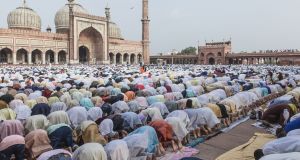 The Islamic call to prayer goes out six times a day, and it’s part of an app I downloaded on to my phone. Photograph: iStock

I was on the train to Dublin last week when the call to prayer rang out on my iPhone. The Islamic call to prayer goes out six times a day, and it’s part of an app I downloaded.

It’s a male voice, not far removed from the melodious tones of a sean-nós singer. I don’t know what the words mean but the melody lures me away from whatever stress or melancholy I’m caught up in.

The train and everyone on it dissolves and I sit alone, drifting into the silence of inner space.

But I’m not the only one daydreaming on the Sligo train. Other passengers get absorbed in their own fantasy worlds, too. They scroll down their Facebook feeds, gazing at endless images of friends and random news feeds, so that when the ticket inspector arrives she has to shout three or four times to get some of them to pay her attention.

Last week the train was near Enfield when the call to prayer erupted so loudly from my phone that it unsettled the man beside me.

What the feck is that?” he wondered.

“II was glad he woke because he had been falling toward my shoulder with an open mouth and the intimacy was becoming uncomfortable.

“Are you serious?” he wondered.

“So why is that thing going off on your phone?” He wondered.

“For me it’s like a Zen bell,” I explained.”It reminds me to engage in a moment of mindfulness.”

He looked even more confused.

There was no way forward after that so I changed the subject.

When I arrived in Connolly Station I pressed a few buttons to disable the app so it wouldn’t embarrass me later that evening. But I hadn’t a clue what I was doing and ended up setting the call to prayer on a loop, which repeatedly played in my pocket every few minutes.

I was in a hurry to meet Niall Breslin, so I pushed on down the stairs to the street, up past Busáras towards the city centre, while the little voice in my pocket continued to call the world to prayer.

Then the amount of homeless people lying around in various alleys and doorways distracted me and I forgot about the phone.

On Talbot Street a man was lying in a doorway and another man lay against the railings of the Ha’penny Bridge. Just across from Grogan’s a man was stretched in a sleeping bag with a coffee cup by his side, and on a patch of green grass near Stephen’s Green a couple were fixing up a tent for the night.

I was in a panic because I was suppose to meet Niall Breslin at 7.30pm in some place called the Sugar Cube.

“Excuse me,” I said to a stranger, “could you tell me where I might find the Sugar Cube.”

“Is this a quiz?” the woman wondered as she looked around for a camera.

Another woman suspected I was looking for drugs.

“No,” I said, “I’m looking for Niall Breslin. He’s doing a podcast this evening in the Sugar Cube.”

And so off I went, and found the club, and found Niall Breslin in the greenroom preparing his notes.

The podcast, Where Is My Mind, was live before a full house of young people and it was completely fascinating. I felt Breslin was opening up mindfulness for young people, introducing his audience to the spiritual path of non-violence, and showing them how compassion makes for a happy life.

On the way back to the hotel I stopped in a fast-food shop and sat at the window staring out on to the street. One homeless person after another staggered along the pavement outside; young women and old men, teenage boys strung out on drugs and gentle old ladies from faraway countries.

My phone had been on airplane mode since I went into the gig, so I rebooted it and almost immediately the Muslim app flung out another call to prayer in the same melodious voice.

And even though I didn’t understand any Arabic, I felt this time I knew what the call meant. It was time I put some coins in some of the paper coffee cups that hung in the air on the way back to the hotel.