Michael Harding: Sometimes I find the rain in Leitrim comforting

I meet a man from Allepo and we chat about his country, Islamic poetry and Leitrim weather 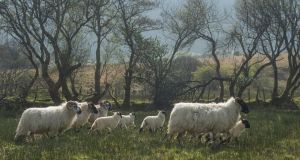 I use the train a lot now, because I have a travel pass, and it saves the stress of driving through the city. Sometimes I stay in the a hotel on Talbot Street because it’s handy for the train and one morning recently I was there when a man from Italy sat down at a table beside me.

He had no English.

“Buon giorno,” he said, under his breath.

“Buon giorno,” I replied, with as much of a lilt as I could remember from the limited experiences I had of Italy on various vacations.

He supposed I was fluent and flew into a passionate monologue, pointing this way and that, but I couldn’t understand a word he was saying.

When his wife arrived he looked at her like a child who had been finally reunited with its’ mother after a traumatic event.

“What was he saying?” I wondered.

“He is looking for the tomato sauce,” she explained, and so she got up and fetched it for him. Then she buttered his toast. And got him coffee. And finally he seemed happy enough.

“What part of Italy are you from?” I inquired.

“How lovely,” I gushed, just trying to be polite. “The weather in Italy is beautiful,” I added.

She agreed. But then she looked with some dismay out the window and declared that, “The weather in Ireland is horrible.”

I gritted my teeth and agreed.

Later, at Connolly station I met a man who loves Irish weather.

It was 8.30am and he was standing on the platform staring at me.

“Can I show you something?” he asked.

And he opened the screen on his phone and showed me the face of a sheep.

Isn’t she lovely?” he said.

“And do you live in Leitrim?” I inquired.

“No,” he said, “I’m living in Dublin this 40 years. But I love the home place so much and I love the sheep, so I go up and down on the train to mind them.”

Later I met a man on the road outside Carrick-on-Shannon looking for a lift.

“Where are you from?” I asked him.

“And where are you going now?”

“Home,” he said. But he didn’t mean Aleppo because he has made his home in Leitrim.

The coffee was strong, and I drank three cups which was a great mistake. When I arrived home my hands began to shake so much the beloved asked if I had been drinking

I gave him a lift to his house, and he invited me in, and I sat down and he made coffee as we chatted about Aleppo, Islamic poetry, and the weather in Leitrim.

The coffee was Turkish. He boiled a little pot of water, and spooned in coffee and then stirred it up. A tar-like black liquid was then poured into two tiny cups and we sat on the sofas and looked out at the rain.

“Do you miss Aleppo?” I wondered, as we gazed out.

He knew I was talking about the rain.

“Yes,” he said, “in Aleppo we have blue skies. Here it is always grey.”

The coffee was strong, and I drank three cups which was a great mistake. When I arrived home my hands began to shake so much the beloved asked if I had been drinking.

I said yes. I told her I met a man from Aleppo and I drank too much coffee.

But I went back to see my new friend the following week and we talked further about Arabian poetry and the beauty of Islam. I suggested that perhaps we could take a spin in my camper van some day.

I mentioned Bundoran in particular, because the high walk along the cliffs to Tullan strand is one of my favourite places in the world.

“The sea is beautiful,” I suggested.

But he wasn’t enthusiastic.

He looked me in the eye.

“My sister drowned in the sea when we were fleeing from the war. With two nieces. They fell out of the boat.”

We looked out the window at a few ragged ash trees bending in the rain, and yellow leaves still clinging to a tiny cherry tree, and sheets of rain sweeping along the concrete pavements.

“Sometimes I find the rain in Leitrim is comforting,” I said, hoping he understood. And he too looked out blankly, as if the rain enveloping the trees expressed all that was in our hearts, and no word passed between us for a long time.