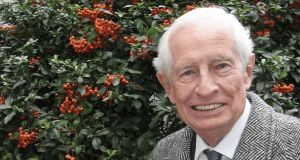 Declan Walton was quiet, modest and cultured man who had wide interests and tastes

Declan Walton, who has died of renal failure aged 89, was a career diplomat with the United Nations who was involved in caring for refugees in eastern Europe and north Africa and became deputy director-general of the UN’s Food and Agriculture Organisation.

Declan was born near Fermoy in Co Cork, the son of Ernest Walton, known as John. He was a Yorkshireman who had worked for a lumber company in Siam (Thailand) and retired to Ireland, where he married Diana Cooke-Collis, who came from a family of Irish landed gentry that traced its roots back to the 17th century.

Walton’s upbringing reflected this ancestry and his early years were spent in a country house in Co Cork and then in Tramore, Co Waterford, under the eyes of, first, a nanny and then an abusive governess whose strict regime left a permanent mark on him. He had one good thing to say about her, namely that she had trained him to use his brain.

He was educated as a boarder at Castle Park school near Dublin and Radley College, near Abingdon, Oxfordshire. He studied modern languages at Oriel College, Oxford, graduating with a first in 1952.

He began his career in the obscure role as an “average adjuster” involved in the world of marine insurance with Marsh & McLennan in Montreal, Canada, for the four years, 1952-56.

In 1956 Walton was the first Irishman to join the office of the UN High Commissioner for Refugees (UNHCR), based in Geneva, in the year after Ireland became a member. In Geneva he met Jeannette Müller, a Swiss colleague, and they married in 1959, and had a daughter, Kathleen.

Walton was soon actively involved in the care of those fleeing from the brutal suppression of the Hungarian uprising. From 1959 to 1962 he was the commissioner’s representative in Morocco, with responsibility – in collaboration with the Red Cross – for the care of some 120,000 refugees displaced by the Algerian War of Independence, and subsequently for their repatriation.

He then worked in New York with the UN economic and social department, and in Rome with the World Food Programme, before joining the UN’s Food and Agriculture Organisation in 1968 as chef de cabinet to the director general. From 1981 to 1985 he worked as an independent consultant, specialising in long-term planning, with assignments in Nigeria, Syria and the Netherlands. In 1986 he returned to the FAO as deputy director general, a post he held until 1988.

Retiring to Britain, Declan and Jeannette settled in the Wiltshire village of Steeple Ashton. He then undertook international assignments in agricultural and environmental issues in India, the Ivory Coast, Colombia, Sri Lanka and Taiwan, until properly retiring in 2003.

A quiet, modest and cultured man, he had wide interests and tastes. His interest in French literature led to a friendship with John Cairncross, who, as “Agent Moliere” has been named the fifth man of the Cambridge spy circle. He met Cairncross for the first time when they were both in Geneva and would reminisce about their time together with their wives both in Geneva and Rome.

He was also, among other poets, a passionate fan of the French symbolist poet, Stephane Mallarme, and paid for a new headstone on the Kensal Green grave of the young girl who was Mallarme’s enduring love and who he uncovered in the course of his researches.

His long experience in international affairs made him adept at dealing with the obfuscations of bureaucracies, and he did not suffer fools gladly. He had a puckish sense of humour, and his passionate concern for humanity did not prevent him from enjoying the good things in life, above all, entertaining family and friends.

Róisín Ingle: My body has seized up while in lockdown
4