Lives lost to Covid-19: Gregarious Belfast man was ‘a battering ram on issues of importance’ 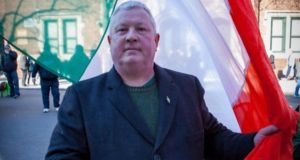 Activist Tarlach MacNiallais moved from Belfast to New York in the mid-1980s. Photograph: Ray Hegarty via The New York Times

The month of March began with a glorious Sunday morning, perfect for the St Pat’s For All Parade in Queens, New York, that celebrates diversity and equality as much as Irish heritage and culture. Among the organisers was the gregarious Tarlach MacNiallais, who had worked long and hard for inclusion of the long excluded.

He was known for his decades of advocacy for LGBT and disability rights. “A battering ram on issues of importance,” according to Harriet Golden, a vice-president at AHRC New York City, an organisation that serves people with intellectual and developmental disabilities, where MacNiallais worked for nearly 35 years.

MacNiallais died on April 1st. He was 57. The cause was complications of the coronavirus, according to friends and family.

He was born Terence Nellis in Belfast on October 9th, 1962, the 10th of 11 children of John James Nellis, a bus conductor, and Una Nellis, a homemaker. He later adopted the Irish language version of his name.

As a university student, he protested against British imperialism and emerged as a gay rights advocate. He responded to the “Save Ulster From Sodomy” campaign of the 1970s – an ultimately unsuccessful effort to keep homosexual acts illegal in Northern Ireland – by helping to mount a counter campaign with the slogan “Save Sodomy From Ulster”.

Brendan Fay, a friend and fellow activist, emphasises that MacNiallais’s well-publicised activism for inclusive parades should not overshadow an equal passion: “Most of his life in this city was advocating for people with disabilities,” Fay says.

MacNiallais tested positive for the virus in mid-March and died at New York-Presbyterian/Weill Cornell Medical Center, with the texted words of loved ones being read to him by a nurse. He is survived by his husband, Juan Nepomuceno, nine siblings and three stepchildren.

On that March Sunday, the day the city’s first case of coronavirus was confirmed, the St Pat’s For All Parade moved joyously through a corner of Queens before ending in the Woodside neighbourhood, where organisers gathered for an after-party at the Saints & Sinners Pub.

Amid the singing and drinking and cheering, the booming voice of MacNiallais was “soaring above the lot of us”, Fay recalled. Everything else, he said, “seemed far away”.