Ignatius and Mary O’Connell obituaries: ‘They died together. There's some small solace in that’

Lives lost to Covid-19: Couple of almost 60 years died within three days of each other 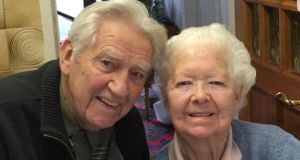 Ignatius and Mary O’Connell met when both were teachers at a school in Ballycastle, Co Antrim. Photograph: Bronagh O’Connell

On Monday, April 20th, Bronagh O’Connell and her sister Aine buried both their parents in Carrickart graveyard, not far from the holiday home in Downings, Co Donegal, where the four of them had spent many idyllic summers. Both Ignatius and Mary O’Connell, respectively 89 and 86, had died of coronavirus. They had died at their Belfast home, within three days of each other.

“The priest told us it was the first time he had ever done a joint funeral,” Bronagh recalls. “I still cannot believe they are both gone.”

A shared dedication to education had brought Ignatius and the then Mary Bogan together. They met when both were teachers at a school in Ballycastle, Co Antrim. Ignatius was teaching Latin, maths and English. Mary was teaching art. Although both of them could have followed other careers, they were fully committed to the importance of education, and of contributing to society. They married in 1960: this August would have marked their diamond wedding anniversary.

Ignatius was born in Crossgar, Co Down, on December 16th, 1930. He went to UCD to study English and scholastic philosophy. After university, he seriously contemplated entering religious life. He spent several years working as a teacher in Port of Spain, Trinidad, with the Holy Ghost Fathers, but decided not to take his final vows.

His daughter Bronagh describes him as being a “devout Jesuit” for the rest of his life, with an unshakeable commitment to social justice. On return to Northern Ireland, he went to teach in Ballycastle at the Star of the Sea School, where he met his future wife.

Mary was born in Omagh, Co Tyrone, on May 3rd, 1933. She studied at the Belfast School of Art, and later at the Leeds School of Art (now Leeds Arts University). A gifted student, in 1956, she won the famed RDS Taylor Art Award, which has been awarded annually since 1878 to art college graduates. Currently worth €10,000, former winners include Walter Osborne, William Orpen, Louis le Brocquy, and Dorothy Cross.

The prize is to facilitate promising art graduates to develop their careers. A watercolourist, Mary spent her award money travelling through Europe for a summer, drawing, sketching and visiting galleries. She met Picasso in the south of France, but was underwhelmed by the experience, recalling him as grumpy.

She was then offered a prestigious art fellowship to Goldsmiths, University of London, but declined. Mary had already decided what she really wanted to do was teach. So she went home to Northern Ireland, where she met Ignatius in the Ballycastle school where they were both working.

After marriage, they settled in Belfast. Ignatius continued his studies in pedagogy. He was one of the primary forces behind the amalgamation of Catholic teacher training colleges in Belfast. The amalgamated, co-ed college, was first known as St Joseph’s, and then as St Mary’s. Affiliated to Queen’s University, Ignatius was its first lay principal.

Mary taught art at the Dominican College, Fortwilliam, in Belfast, taking time out to have her two daughters. After retiring in 1986, she took up watercolours again, and won several further awards. Her favourite subject was the Donegal landscape near their holiday home in Downings. Their only grandchild, Conor, was born around this time. He was her frequent and adored little companion, following his grandmother around as she gardened, baked and sewed.

Upon Ignatius’s retirement, he got his golf handicap to five. He read constantly; mostly theology and philosophy. “He could see clarity where most people could only see mud,” Bronagh says. He loved crosswords. He kept up contact with former colleagues in education.

Two years ago, he developed Alzheimer’s, but remained living happily at home with the assistance of carers who visited daily.

Just after St Patrick’s Day, when it was becoming clear to all that coronavirus had infiltrated Ireland, Bronagh invited her parents to shelter with her, at her home in Randalstown in Co Antrim. A trained nurse, she was confident she could help keep them safe.

Towards the end of March, Ignatius developed what they initially thought was a chest infection. When it had not cleared up after antibiotics and two days, they were advised by medics to bring him back to Belfast, where there was a mobile coronavirus unit.

Bronagh brought her parents back to their Belfast home, accompanied by her son Conor. What followed was two deeply distressing weeks of watching first her father, and then her mother, develop symptoms of the disease, and start struggling to breathe. They were supported throughout this time by what she describes as a “fantastic” team of medical workers, district nurses and carers.

Ignatius O’Connell died at 7am on April 14th. His wife of almost 60 years, Mary, died at 7pm three days later, on April 17th. By then unconscious, Mary died not knowing her husband had preceded her.

Bronagh herself tested positive for the virus in the days following the joint funeral. She has since recovered, but the two sisters are still trying to process the fact they lost both parents within three days to the virus. “They died at home, and together. There is some small solace in that,” Bronagh says.