New to the Parish: Vincenzo Rea was shocked by childcare costs and attitudes to alcohol 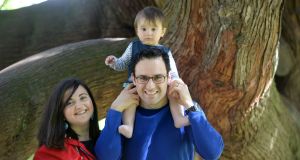 When Vincenzo Rea moved to Ireland in December 2013 he hoped it wouldn’t take long to find work. An engineering graduate and former IT tutor, he had read about Dublin’s booming technology industry and felt confident speaking English. However, after a few weeks of failed interviews he started to get frustrated.

“I was a good student in school and had good scores at university. Failing was a new experience for me and I wasn’t comfortable with it. I wanted to figure out what was going on so I started recording myself speaking in interviews. It was a challenge to listen back but I forced myself to do it. It made me realise my English wasn’t good enough.”

Growing up in the town of Pomigliano d’Arco on the outskirts of Naples in southern Italy, Rea excelled in maths at school and participated in national mathematics tournaments. He studied engineering at university and spent half a year in Spain as part of an Erasmus study abroad programme. Those six months in Madrid convinced Rea he needed to move abroad to build a career.

“I saw Naples as a very nice place to visit and be a tourist but I knew working there would be challenging. Many people struggle and salaries are not high. I researched northern Italy but saw it had the same problems so I thought I’ll look abroad.”

Rea was also keen to learn what it was like to live in a place where one could trust strangers walking down the street. “In Naples the number of crimes is higher than the rest of the country, so my parents educated me not to trust strangers. Years later when I moved and started to travel I realised that wasn’t a great way to think. If you can’t trust the people from the start you can’t properly enjoy the relationship you are building with someone.”

The Italian community in Dublin was fairly strong – they hang out together, go to pubs and play football

When he first arrived in Dublin, Rea spent a fortnight in a hostel before moving into a shared apartment on the quays of the Liffey. Despite his best efforts to improve his English to secure work, he found himself regularly hanging out with other Italians.

“The Italian community in Dublin was fairly strong – they hang out together, go to pubs and play football. I realised if I spent a lot of time with them there was a risk of losing focus on my main purpose, which was improving my English and finding a job so I could stay here long-term.”

Rea was eventually offered a job with an insurance company and a year later his girlfriend Andreana joined him in Dublin. “I think she secretly hoped things wouldn’t work out and I’d have to return home. She had built up a career as a psychotherapist in Italy and initially the move here was tough for her. But then she realised the lifestyle here suited her better.

“She started getting Irish clients and when you see people coming back for therapy it’s definitely rewarding. You realise the language is not a barrier anymore.”

After a few years living in a studio apartment in Rathmines the couple, who were now married, bought an apartment in Ballinteer in south Dublin.

At first, Rea’s parents struggled with their son’s decision to live abroad. “My father wasn’t happy. He had worked in the same company for years and he wanted me to join the organisation but I totally rejected that direction from the beginning. My mother wasn’t happy either that I was leaving but she then realised I could find myself abroad.

“My mother had never flown abroad before she visited here; her life was at home and she never went outside her comfort zone. But when she came here for the first time she was so happy to see the green parks and flowers. You don’t see that in the south of Italy because of the heat. My father is happy for me now too. He likes that I can afford to buy an apartment, and my success makes him happy.”

In April 2019 the couple’s daughter Alice was born. They were overwhelmed by the support they received at the National Maternity Hospital at Holles Street and still reflect on how much it helped them as first time parents. “We found the midwives very empathetic, we always felt safe and in experienced hands. Our little Alice will make us very proud if she becomes a midwife one day.”

The couple are now expecting their second daughter who they plan to name Zoe.

“The more babies we have the less chance there is we’ll move elsewhere. I grew up with Italian culture but they will have Irish culture. I’m open to seeing my kids grow up as Irish; it will also be an opportunity to integrate more.”

Rea now works as a senior consultant with the BSI cyber security consulting service. He finds his work challenging and is grateful for the support he receives from more senior colleagues. “People above me in work who have more experience want to know my opinion on certain topics. That doesn’t happen in Italy and it definitely builds up your confidence.”

He likes living in Ireland although was shocked by the cost of childcare when Alice started attending crèche earlier this year. “I can afford it but I often put myself in the shoes of people who can’t pay for it. If you asked me what would I change about this country, I’d make childcare more affordable. Healthcare is very expensive too.”

Rea also dislikes Ireland’s alcohol culture, particularly among younger people. “In Italy you drink wine because it tastes good but here I see people drinking just for the sake of it, not for the taste. I see so much more drinking in Ireland than I did in Italy and I don’t understand why.”

Rea and his wife are now working from home and have been following the news of the Covid-19 pandemic in their home country. While southern Italy was not hit with the same force as the north, Rea regularly checks in with his parents who have been stuck at home for weeks. The family was due to travel to Italy this spring but now realise they probably won’t make it over until Christmas.

“We were planning to go back in April for Alice’s first birthday; there are some family members who haven’t met her yet. That’s been the impact the coronavirus has had on my personal life. It’s definitely not as a deep as people who have lost work or loved ones but it’s still had an impact on us.”