Nancy Whyte obituary: Voracious reader who was trusted by all her neighbours

Lives lost to Covid-19: Whyte raised a family of five and had a ‘great life’ in west Dublin 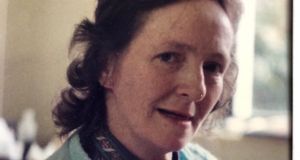 Nancy Whyte ‘was the sort of woman who didn’t like a lot of fuss’.

Nancy Whyte was 82 when she died. Of course, as her daughter Philomena puts it, she was 82 for about a decade beforehand as well. She added a year here and took a year away there when it suited her. Hedging her bets, keeping a bit for herself.

“She had many names as well, it turns out,” Philomena says. “Everyone called her Nancy but that’s not her birth name at all. She always said it was Mary-Anne but even that’s not the truth either. We found out when she died that that her name was actually Anne-Mary. We went looking for a registry of her birth and found an Anne-Mary born in Trim in 1937 and sure that couldn’t be her. But it was. All her life she signed her name as Mary-Anne or Nancy but her name was Anne-Mary. Isn’t that gas?”

She grew up in Stackallen, Co Meath. Her parents died young – her father before she was 10 and her mother when she was 19. Nancy and her brother moved in with their uncle after their mother died but soon afterwards, she met her husband-to-be Richard Whyte.

They got married in 1958 and eventually moved to Saggart in west Dublin where they raised a family of five. Richard worked with horses on Tassaggart Stud farm – now the site of the Citywest compound.

“They loved Saggart and had a great life there,” Philomena says. “They were blow-ins and but that didn’t matter. Mam had the keys to everyone’s house. Everyone on the street gave her their spare key because everyone trusted her and she had a big jangle of them. We always said that if our house was robbed, the whole street would be robbed! It happened the whole time, friends of ours would come knocking on the door and go, ‘Where’s your mam, where’s Nancy? I’m locked out of the house.’”

Nancy was a housewife, getting the kids out to school in the mornings, ferrying lunch out to Richard in the fields in the afternoon. She was a voracious reader and loved writing letters.

“She liked rugby, oddly enough. There was no rugby in her background or anything but she loved watching the Ireland matches. And although she never drove, she loved Formula One. She was dead serious about it. We could never get our heads around it. Dad liked driving and was into cars all right and he used to bring us down to Mondello Park every Sunday when we were kids. Mam came the odd time but it wasn’t really her thing. And yet she was crazy into Formula One for whatever reason.”

Nancy Whyte lived a normal, unsung life. She had a stroke in 2017 and her son Paul became her carer. She was taken to hospital on April 1st with symptoms of coronavirus and died a week later.

“She was the sort of woman who didn’t like a lot of fuss,” Philomena says. “In a way, when she died, she got what she wanted. Not dying, obviously. But she wouldn’t have wanted a funeral with any fuss.

“All the neighbours stood along the road and we drove slowly through Saggart and it was really beautiful. Very simple, just a lovely thing of people standing there as she passed. The hearse pulled up to the church in Saggart and the priest came out and blessed the coffin and then we drove off to Mount Jerome cemetery. So basically, she got a no-fuss funeral. I think she would have liked that.”