Taycan is pure Porsche but with potent electric power

First drive - Porsche Taycan Turbo S: The future’s here, then, but it’s been worth the wait. 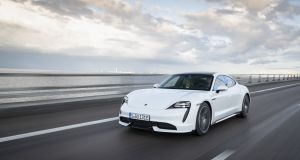 Porsche Taycan: for the plug-in future

Repeatability. That’s the line we’ve heard, erm, repeatedly, since the first details of the Porsche Taycan started to be revealed. It’s been a long time coming, Porsche, like all legacy car makers still playing catch-up to the American upstart, Tesla, in introducing electric cars into their showrooms.

Porsche, at least, can point back to its early history here, though, with its Effer-Lohner C2 Phaeton electric vehicle, a kind of electric horseless carriage designed by Ferdinand Porsche back in 1898.

The first Porsche was electric. How things might have been different had Ferdinand stuck with plugs rather than pumps.

A not insignificant 121 years later, the Porsche Taycan is here, a Porsche for the plug-in future, a ground-up design and represents a €6.6 billion investment with an all-new production plant being built in Porsche’s Zuffenhausen heartland. That factory is said to have a maximum production capacity of around 20,000 Taycans annually. Initial reports suggest the company already has orders for 30,000 Taycans.

That’s even more remarkable because, thus far, Porsche has only revealed two Taycan models – the range-topping Turbo and the Turbo S. Odd nomenclature aside, Porsche saying Turbo is brand identifying with its top line models, these two high performance flagships come with price tags to match – the Turbo costing €160,341, and the Turbo S adding €30,000 on top of that. That’s before options, which, on our launch test Turbo S added €22,000. That’s not far off double what you’ll pay for a Tesla Model S, even in its most high performance ‘Ludicrous’ specification, which has performance figures to better the German.

That brings us to that repeatability Porsche keeps talking about. The Taycan, promises Porsche, can produce its outrageous performance all day long. If you buy a Taycan Turbo S and want to run 0-100km/h times until the battery is flat then you can do so. That’s not so easy in the Tesla. But, after one or two stopwatch sessions even those with the strongest constitution are likely to feel a little bit sick, such are the forces it generates.

For the record, the Turbo S sprints to 100km/h in 2.8 seconds, the ferocity of the acceleration made even more incomprehensible when it’s allied with the absence, largely, of sound. At the top end, it’ll manage 260km/h, if you happen to be passing through its mother country.

Allowing that is a pair of electric motors, one driving the front wheels, the other the back. That rear motor uses a two-speed transmission to flip between more economical driving and outright performance. There are drive modes, from Range through Normal and Sport, Sport+ and Individual, but given the performance is anything but normal, there’s never any need to play with the settings.

With the Turbo S the combined output of its motors is up to 761PS. That needa qualification as it’s only producing its maximum if you’re in Launch Control. That’s true, too, of the 1050Nm of torque. The Turbo makes do with launch control peak outputs of 680PS and 850Nm, enough still, for a neck muscle tearing 3.2 second 0-100km/time, however often you want to do it. And, yes, both are slower than that Tesla here, but we’ll leave it to the internet fan boys, and girls, on both sides, to duke out the minutiae of that argument ad infinitum.

Both feature a battery of 93.4 kWh capacity, which, translates, if you’re not au-fait yet with the terminology around electric vehicles, to a WLTP range that’s quoted at between 388-412km with the Turbo S (or 450km with the Turbo). That, again, isn’t quite as far as that Tesla can manage, but, if you’ve even a passing interest in electric cars, you probably already knew that.

Porsche is fairly unapologetic about that, instead repeating its mantra of engineering integrity and ingenuity with the Taycan using future-proofed 800V electronics, innovative permanently excited motors with hairpin wound copper and magnets, these giving a high power density in comparison to conventional electric motors. It will accept rapid charging, too, with a charger pushing out as much as 270kW a 5-80 per cent charge can be achieved in as little as 22.5 minutes.

Such potent chargers are rare presently, but they’re coming. The Government has recently pledged €20 million for fast chargers across Ireland, and the Taycan is ready for them. An 11kW charge, as is possible at home with the correct wallbox, will give a 100 per cent charge in 9 hours.

What’s also interesting is that Porsche’s people all reference the 911 regularly when talking about the Taycan. The new electric car has a lower centre of gravity than the company’s iconic sports car, while the seating position feels very familiar from the 911, too.

As is the dashboard. In front of you is a digital screen that’s gently curved to create an instrument binnacle, a large central touch screen in the centre dash, as well as another housed in the transmission tunnel. There’s a third, optional screen in front of the passenger, but you’d have to have a peculiarly lazy passenger to not stretch the few centimetres over to the main screen to justify the €1,000 it costs.

If the cabin references the 911 in its form and driving position, so too does it with its build quality. It’s beautifully finished in there, whether you’re in the front or, tight, but still useful, rear seats. Press the big start button and there’s no sound, unless you’ve optioned it, the sound generator producing an electric motor sound that’s strangely sci-fi inside, but slightly combustion-like outside. Either way, it’s amazing how quickly it all feels normal, even if the incredible reaction to your right foot never gets boring.

What’s clear immediately is that it feels like a Porsche. From the seating position, to the weighting and directness of the steering, the response and the way it rides with supple comfort, yet fine body control. Range anxiety isn’t an issue, either, at least not when Porsche has plotted a route taking in two Ionity rapid charging stations, over a 410km journey from Gothenburg, Sweden, to Copenhagen, Denmark.

The Turbo S’s potential range dial was consistent in its accuracy, its precision in this area thanks to input from everything from traffic data to topography and driving style. To achieve that, you’ll need to always use the sat-nav and input a destination. Do so and the Taycan will take into account every facet, including charging times for an accurate arrival time.

Not that the 410km the Turbo S was driven was with economy in mind, a good potion of the route on the sort of testing, country roads that Mark Webber, ex F1 and WEC driver, and one of Porsche’s driving ambassadors, admitted to getting a bit carried away on.

Do that and it’s hilariously, genuinely shockingly, quick, and incredibly capable, and, yet, it only required a 25-minute quick charge to cover the entire distance after starting with a battery at around 80 per cent state of charge. We did take a precautionary 5 min 30 second charge, gaining an unnecessary, but impressive, 80km range boost near our final destination. It all works then, with the proviso of the availability of fast chargers.

So, the future’s here, then, but it’s been worth the wait. Being a Porsche it’s expensive, and while nobody’s saying it too loudly at Porsche, we can expect lower performance, more affordable Taycan models in time. With order books brimming for its range-topping Turbo and Turbo S, Porsche might be as well to recoup the huge initially investment the Taycan represents.