Can an electric motorcycle spark the interest of an old-school biker?

The Zero DS motorcycle claims a city range of 262 km and with abundant torque, progress in traffic is a doddle

Can the all-electric Zero DS ZF14.4 motorcycle be as fun to ride as the noisy, petrol-powered machines that bikers know and love? We took one for a - very quiet - blast to find out. Video: John Cassidy 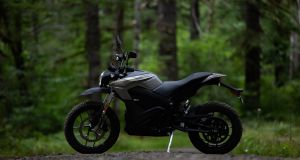 The only hint that this machine is any way different is the lack of a lever on the left bar and corresponding foot pedal.

There are many things that make the motorcycling experience an enjoyable one - the freedom of the open road and the freedom to filter through queues of stationary traffic. There are more deeply fundamental sensations as well: the aroma of hot metal and burning oil, the sound of the engine growling, beating and breathing next to you like a living companion and co-conspirator. The raw, sheer fun.

So, I was a little lukewarm at the prospect of riding the Zero DS motorcycle. There’s a lot in a name, you see, and in this case the motorcycle in question is a zero-emissions, electric machine. That zero figure being dependent on where your electricity comes from originally, of course - but that’s another story.

If I was asked to pilot a golf cart my pulse might have raced with similar anticipation. Those electric carts are by far the most exciting part of the golfing experience - apart from the odd well aimed-lightening bolt, of course. Which brings us back to electricity.

Now, I know what you’re thinking… that this windy preamble will predictably metamorphose into the hack concluding that his old-school preconceptions were wrong, and that he actually liked the bike. And you know what? You’re correct.

Indeed, the first thing you notice when you sit on the Zero DS is how incredibly normal it feels. The only hint that this machine is any way different is the lack of a lever on the left bar and corresponding foot pedal. The switchgear looks and feels decent, there’s what looks like a fuel tank in front of your reproductive bits, and the whole nicely-balanced shebang feels like a cross between a Yamaha MT-06 and a Tracer.

This particular model was the Zero DS ZF14.4 version (priced at €16,990) with a capacity of 14.4 kWh, weighing in at 187 kg - just five kilos more than a fuelled-up MT-06. The styling is decidedly dual-sports though, the seat height being 843mm, more akin to the Tracer’s 850mm perch. Handlebars are a comfortable arm-stretch away, making the riding position quite upright. There’s a halogen lamp up front and an LED cluster brake light.

On the move, the bike carries its big battery well - it resides where we’re used to seeing an engine - and, apart from the eerie silence, feels surprisingly familiar; once your left hand stops groping for a non-existent clutch lever. Speaking of which, you might think being unable to slip a clutch would make low-speed manoeuvring an ordeal, but the incredibly progressive throttle makes pottering around town or the carpark easy. You can even feather the rear brake for stability as you would on a clutch-equipped piston-pumper.

There are three riding modes which can even be set through a smartphone app: Eco, Custom and Sport. Sport is what it says on the tin, pouring out maximum speed, torque and responsiveness. Eco is for if you wear sandals or do a lot of low-speed town riding. Custom allows you to set up your own preferences: mine were full power and high engine braking regeneration. The latter converts “engine” braking into regenerative power for the battery, which extends its range on the twisties.

Speaking of twisties, the DS handles them very well indeed. The chassis is well set up, with 41mm upside-down Showa forks up front and a 40mm piggyback shock at the back. Even with generous dual-sport bike suspension travel, 178 mm front and 179 mm rear, the bike felt very composed under braking and through direction changes. It took bumpy, broken washboard surfaces - which we’ve our fair quota of in Ireland - in its stride. Its chunky Pirelli MT-60s. - 19 inch front, 17 inch back - should even cater for some decibel-discreet off-roading if so desired.

On faster roads there was abundant torque for overtaking - 110 Nm of it - and making progress in traffic was a doddle. That torque is “always on” too, available at every speed. Top speed is given as 158 km/h. The motorway, however, is where battery-powered bikes have to work hardest on a higher constant throttle.

Zero claim a highway range of 126 km at 113 km/h for the DS 14.4, or 156 km with the optional Power Tank which fits into the luggage compartment of the false tank. Another option is the Charge Tank, with fits into the same space and facilitates fast charging at public stations, so if you plan to cover a lot of ground one or the other might be deemed a necessary “option”.

The manufacturer claims a city range of 262 km for the DS 14.4, or 328 km with the Power Tank. It’s somewhat the opposite of what we are used to, with urban riding proving the most economical. Obviously, these are all manufacturer’s figures, and real-life results will no doubt depend on a variety of factors such as rider weight, size, riding style and road.

As far as charging goes, there is a kettle-type lead which you can plug in to the left-hand side of the bike at home. This method is probably best suited to overnight charging, as Zero cite a time of 9.8 hours for a 100 per cent charge for the 14.4 model or 9.3 hours to reach 95 per cent full. The Charge Tank speeds up this process to about two hours to 95 per cent capacity at a Level 2 charging station. There are also fast charging accessories for home use which are probably best discussed with a dealer.

In conclusion, there are a lot of factors to take into consideration when determining if going electric is for you. As with many EVs, a methodical approach to planning longer-journey itineraries might be advisable. It all depends on whether you possess a modicum of organisational ability and forethought or if, like me, you experience difficulty in finding matching socks in the morning.

On the other hand, electric bikes have charms that will appeal to the most hopelessly half-assed of us. No oil changes, no filters, no clutch issues, no spark plugs, minimal servicing mainly confined to consumables such as tyres, brake pads and disks and a keeping an eye on the low-maintenance belt final drive. Then there is the beauty of just plugging it in at home in the evening and gliding past the pumps the following morning.

So you really have to weigh it all up for yourself.

But is it fun? Unequivocally.