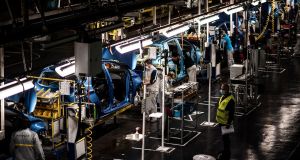 The shortage of semiconductor chips is not just down to one big issue, but rather an unfortunate coincidence of several. Photograph: Getty Images

It’s always frustrating when you don’t order enough chips, but rather than have too few fried potatoes to go around, the global car industry is facing a shortage of semiconductor chips, vital for onboard computer and infotainment systems.

It’s not just because of the fad for ever-bigger touchscreens, either – chips are critical for system upon which we rely for safety. Anti-lock brakes, for example, or traction and stability control, or the new offerings of automatic braking and radar-guided cruise control.

As far as Irish customers are concerned, you probably won’t notice a huge difference, at least for now. A spokesperson for Opel Ireland, talking about the chip shortage, told The Irish Times: “Locally, it has not had an impact, but we are monitoring the situation very carefully.”

In a broader sense, Opel confirmed the global shortage of semiconductor chips concerns the whole automotive world “and affects all our production sites”.

“The first two quarters of 2021 should be the most difficult period of time in this respect, and we expect an improvement later on this year. Customer satisfaction is our number one priority and we are doing our utmost to limit the impact on the date of delivery for our customers.”

Toyota Ireland too confirmed that, as yet, Irish customer deliveries had not been affected, but also said that the Japanese giant’s plant in the Czech Republic was shuttered for two weeks in March, thanks to the shortage. Even so, Toyota said: “Supply is still okay and Toyota Motor Europe expects to maintain its total European sales plan.”

So how has the motor industry – a global behemoth of production and employment – managed to find itself with the wrong end of the chip supply stick? Partly because when it comes to chips, the big car makers are not the biggest players in the room.

When looking at total global chip production, automotive applications account for about $43 billion worth. That sounds like a lot, and it is, but even that figure is dwarfed by other consumer products, which take $58 billion worth of global production; smartphones, which eat up a massive $116 billion worth; and at the top of the bag of chips, PCs and laptops, which take some $137 billion worth.

The semiconductor shortage is one of the issues that is catching us by surprise. We may expect more such surprises

According to figures from analyst firm Bain & Co, global car companies actually account for just 10 per cent of chip production. Bain went on to say that the car industry’s “legacy approach” to building its supply chains is, in large part, how it has come to this constriction in supply, and that while some quick-fix measures might well ease the problem over the next few months, “that is not a sustainable long-term solution. We see multiple events on the horizon, with the potential of similar or worse disruption for the industry.”

A big issue for the car industry is that this supply issue has really only made the big players sit up now and notice how important chips are in car-making, and how comparatively unimportant the car industry is to chip suppliers. Bain & Co has warned that other players, especially those technology companies which are utterly reliant on chips, are prepared to ramp up spending to secure the supplies that they need, potentially making a short-supply issue into a cost issue.

Nissan’s chief operating officer, Ashwani Gupta, told the Financial Times: “We are already facing an unprecedented crisis with Covid-19, and one of the things that it has highlighted is the vulnerability of our supply chain. The semiconductor shortage is one of the issues that is catching us by surprise. We may expect more such surprises.”

The shortage of chips is not really down to one major issue, but rather an unfortunate coincidence of several. A fire in the “clean room” – a dust-free environment crucial to the making of reliable electronics – at Renesas, a Japanese-based company which is the world’s second-largest supplier of chips, put a partial brake on production.

That was exacerbated by the record cold temperatures in Texas, which stalled oil production. Why would that matter? Because chips are basically circuit-board printed on plastic, and you need oil to make plastic. Then, of course, there was the Ever Given, the massive container ship that ran aground and blocked the Suez Canal for more than a week, slowing deliveries of parts and components (more than just chips, incidentally) coming to Europe from east Asia.

While at the consumer level, the impact may seem insignificant – someone who orders a new car has to wait a few extra weeks, maybe a month before it’s delivered – against the backdrop of Covid and Brexit, there are significant dangers here for the major car makers. Most car companies have bounced back quicker and stronger from Covid shutdowns than most other industries - a product in part of some people spending what would otherwise be holiday money on a new car, or in other cases of people turning away from public transport in a post-Covid world – but if someone ordering a new car is told that it won’t land on their driveway for several weeks, they may well decide to switch to a different brand, who can get their chips in time, or possibly just abandon the order entirely.

Volkswagen, which has been one of the hardest-hit companies in terms of estimated falls in production and sales volume thanks to the shortage, is already ringing alarm bells for the rest of 2021. “The automotive industry recovered much more quickly and steeply than expected, while the ramp-up of automotive semiconductor production for central supply parts was comparatively slow,” said a spokesperson for VW Group, speaking to Automotive Logistics magazine. “The result is industry-wide adaptations and reductions in automobile production.

“In Germany several production sites, including our main plant at Wolfsburg, have applied for short-time work,” said the spokesperson. “Volkswagen continues to examine all countermeasures and alternatives to limit the impact of the global supply bottleneck for semiconductors on production to ensure the fastest possible supply for all customers.”

Both Ford and Stellantis – the megagroup made up of the merger of Peugeot, Citroen, Opel, Fiat, Alfa Romeo, Jeep and others – have said that the global chip shortage will curtail production in Europe.