Alpine A110: Near-perfect sports car points the way to a glorious electric future

Renault's Alpine A110 is a sports car designed to be fun, something it does with a capital French 'F'. A competitor for the Porsche Cayman, it takes a leaf from the Lotus book of keeping things sublimely light and agile. Video: Neil Briscoe 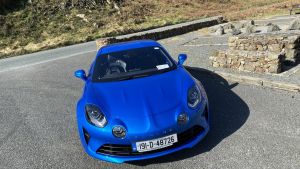 Alpine A110 Légende: This near-perfect sports car gives us hope of a more enjoyable electric future

In a way, this is a homecoming. As the stubby blue snout of the Alpine A110 snuffles and sniffs along a twisting, heaving, lumpy stretch of Irish tarmac, I can’t help but feel that the car’s creator had more or less exactly this road in mind when he sketched out its mechanical specification.

And what a specification that is. This new Alpine A110 mimics both the style and the engineering makeup of its famed, eponymous 1970s predecessor. That original Alpine A110 took the engine, suspension, and sundry other parts from the Renault 8 saloon, and wrapped them in a cling-filmed suit of abiding beauty. Small, light and agile, the original A110 made for a terrific sports car and an even better rally weapon – it was in 1973 the first car to win the International Championship for Manufacturers in world rallying.

Alpine would go on to make a succession of rear-engined sports cars, all with Renault power, through to the 1990s, becoming something of a French analogue to Porsche, when sluggish sales of the slant-nosed GTA finally brought production at the company’s Dieppe factory to a halt.

Now, though, it has been revived by Renault, and this delectable, none-more-blue two-seater is the result. It sits on a featherweight aluminium chassis, inspired by the work of Lotus. The body apes almost perfectly the lines and shapes of the 1970s original but the A110 seems to somehow neatly sidestep being self-consciously retro.

Behind the two-seat cabin (unlike the fully rear-engined original) lies the 1.8-litre turbo four-cylinder engine from the Renault Megane RS, here in 252hp trim. It drives the rear wheels (well, of course it does) through a seven-speed DCT dual-clutch gearbox, also borrowed from the Megane RS. Thanks to weighing half of sod-all, this Roquefort rocket can hit 100km/h in just 4.5 seconds, yet has relatively saintly CO2 emissions.

It also costs a packet. Renault Ireland doesn’t officially import the Alpine as yet. Indeed, this lightly-used 2019-plate example has been loaned to us more or less as a toe-in-the-water exercise, to gauge interest among potential Irish customers. They’d have to be dedicated, as the price tag for this one, in its semi-luxurious Légende specification, is somewhere in the €80,000 ballpark.

Gulp. That’s a lot of cash, although it’s not totally out of line with what Porsche charges for a well-specced Cayman 718. Can this little-heralded French coupe really take on the might of Stuttgart, though?

In a word, oui. Yes it really can. Along that higgledy-piggledy mountain road, the Alpine felt not merely totally at home, but also wonderfully, immersively, fun. We have become so used to pedalling obese 4x4s with chunky engines up front that the lightness of the A110’s front end actually takes some acclimating at first. It’s not in the slightest nervous, nor darty, as you turn into a corner, but there’s just no inertia, no waiting for the suspension to work out how to transfer the mass from one wheel to another. You turn, it goes.

It’s not inert, though. Somehow, Alpine’s engineers have managed to squeeze real feedback and feeling from the electric power steering, and if the ride quality is a touch on the firm side, the A110 still manages to show just how appallingly harsh some supposedly sporting coupes from rival carmakers are. It’s not soft, the Alpine (indeed, in extremis I wouldn’t have minded it being a touch softer than it is) but it is supple. It works with the road surface rather than trying to have an argument with it.

The 1.8 turbo engine is rather lovely too. Shorn of some of the kilos it must haul in the Megane RS, it’s responsive, lacking almost totally in turbo lag and snarls, pops, and farts entertainingly just behind your ears. A bonus for Alpine – its four-cylinder engine carries none of the aural baggage of rival Porsche’s flat-four turbo (cue the “but it’s not a flat-six” whinging . . .). Even the DCT gearbox – normally one of Renault’s least-impressive pieces of engineering – here feels alert and almost eerily prescient at picking the right gear, almost as if there are tarot cards slipped in between the cogs.

In the cockpit, you sit low and laid back on wonderfully supportive and comfortable leather bucket seats. The cabin has a curious mix of expensive-looking carbon fibre, lush quilted leather, ultra-cheap plastics, cast-off Clio buttons and a truly dreadful infotainment screen. The sweet detailing – such as cool-to-the-touch metal gearshift paddles and enamel French tricolours on the door trims – do make up a bit for that. It’s even tolerably practical. There are two small boots, front and rear, and plenty of leg and elbow room for the two occupants. Heck, it’s even economical, easily averaging 7.6 litres per 100km. I can think of family crossovers that struggle to equal that. How much better a state might our environment be in had we, en masse, fallen for flyweight 1,100kg French sports cars instead of SUVs?

Of course, the reason that the A110 feels so nigh-on-perfectly suited to Irish conditions is because the man behind its engineering is from Cork. David Twohig, also responsible for the original Renault Zoe and the Nissan Qashqai – and just think therefore how many people’s motoring choices he has therefore influenced over the past decade – has moved on from the Renault-Nissan Alliance since, but he’s still happy to chat about the A110 and what makes it so special.

“What makes the A110 special is the confidence it gives you, or at least that it gave me,” Twohig tells The Irish Times. “As a very enthusiastic but unskilled driver, the car always made me feel a better driver than I really am. That was true on the road – and I was lucky enough to have the chance to have driven it on some of the best roads in the world, in sometimes terrible conditions and all weathers – or on track.

“It always felt like it was with me, not against me, willing me on and wishing me luck rather than looking for its chance to bite me. This is partly due to knowing the car well but also to do with light weight, with a deliberately low polar movement of inertia, and the tyre and suspension choices. I loved it, and I still do. I always got out of it feeling like a driving hero, not an underachiever.”

I know what he means. The fantastic thing about the Alpine is that if you press hard and dig deep, it digs deeper and finds new ways of helping you, entertaining you, indulging you. On top of that, being French, it also manages to be a comfortable and relatively refined companion on a longer run. You could use this every day without also signing up for a hair shirt and some flagellation sessions.

Will many Irish buyers do so? Doubtful, but not because of any poor performance on the car’s part. Sadly, we are a conservative bunch of car buyers, who tend to shun sports cars at the best of times and seem happier in our dull, dumb SUVs and crossovers. More’s the pity.

However, the next chapter of Alpine could be rather more enticing to the average Irish car buyer. There won’t be a next generation of the A110 in petrol-powered form; Renault instead wants Alpine to become its high-performance electric brand, taking on the likes of Polestar and Tesla as it goes. Three new battery-powered Alpines are, according to Renault insiders, being planned – a hot hatch, an inevitable crossover, and – saints be praised – an A110 replacement.

How will the brand be able to marry that legacy of lightness with the weight and bulk that comes with battery power? Renault’s not ready to say yet, but Twohig reckons it won’t be easy: “If I had the answer to that, I’d be a rich man. It’s a huge challenge. We can do amazing things with EVs in terms of straight-line acceleration, and even cheat physics a bit with true twin-axle torque vectoring and clever software, but the effect of mass on lateral acceleration – when you’re cornering – is unsolvable until batteries become a lot lighter. Which they will, but it won’t happen tomorrow.

“I’m very interested in the work being done on ‘clean’ combustion engines, such as Porsche’s work on synthetic fuels, which is fascinating. So I can easily imagine a trend towards lightweight cars with perfectly-clean internal combustion engines, developed for the enthusiast market, nicely complementing the EVs that we will all be driving Monday to Friday. I’m a huge optimist about all this. We can address the environmental issues that we’ve created, and have a hell of a lot of fun doing it.”

Alpine A110 Légende: the lowdown