Road test: For lugging a family about in comfort it’s really impressive 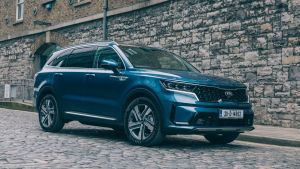 It’s one of the best surprises of 2021. Kia has delivered a big seven-seat plug-in hybrid SUV, with off-road ability, an abundance of modern tech and comfort features for €50,000. That’s €2,440 less than you pay for the equivalent diesel version. Who said going electric meant paying more?

We’ve already been impressed by the 2.2-litre diesel version of this smart-looking family crossover, but given the interest in electric and hybrid power of late, we were looking forward to the plug-in hybrid. We were not disappointed.

Boasting the same spacious cabin and features as its oil-burning brother, the plug-in version claims an official fully-electric range of 57km, and up to 70km in city driving. We suspect that many of its buyers will be suburban families rather than rural off-roaders, it’s fair to assume that most journeys undertaken by this new Sorento will be completed in full-electric mode.

Just to recap, what you get here is a large, very comfortable people mover – a sitting room on wheels with loads of legroom front and rear, room for two teens in the third row and an array of features that would match any premium rival demanding €20,000 more.

This latter feature is similar to what you get in Land Rovers, letting you set the four-wheel drive system to maximise performance in mud, snow or sand. We could go on but the specification sheet runs to nearly three pages of A4.

For an extra €5,000, you can upgrade to the higher K4 specification, adding an electrically-powered tailgate, a sweeping panoramic glass sunroof, Bose sound system and heated rear seats. Even with this extra spend, it still seems a good value buy. Not to mention that it’s got some really smart styling touches, particularly in the way they’ve designed the front nose.

The €50,000 price tag (after the SEAI grant) is remarkably competitive for a car of this type

I was so impressed by the new Sorento that it featured on my shortlist for this year’s Car of the Year, though it didn’t make the final cut when the votes of all jury members were counted.

My main concern was that in this plug-in hybrid format, the 1.6-litre petrol engine would lack enough pulling power, while the sheer scale of this seven-seater SUV would make a mockery of the 13.8kW battery pack. The good news is that in the main, my fears were unfounded.

While the Sorento has a kerb weight of 2-tonnes, even at motorway speeds this Kia never felt overwhelmed by the task at hand. While we didn’t test it, Kia claims this Sorento PHEV can also tow up to a weight of 1,500kgs.

It’s certainly no performance car, but for lugging a family about in comfort it’s really impressive and even when the engine kicks in, the cabin remains relatively serene. As with all these PHEVs, the official battery range is often aspirational, but over several circuits of a route that was majority national road speeds, I still managed to achieve more than 40km in fully electric power.

Another fear was that the extra weight of the battery pack would impact on the ride quality, but even here the engineering brief has been honed in for comfort and hitting speed bumps at speeds still didn’t bottom out the suspension. While some may find it a little firm, the lack of bodyroll for a car of this size is impressive.

Where this car excels is in practicality and comfort. Even with seven seats in use, there’s enough boot space left for a shopping trip or a dog in the back. In terms of tech, the touchscreen is very user-friendly with easy shortcut buttons, while I counted eight USB ports strategically placed throughout the car.

Match all this with the ability to run on full-electric power for 40km along with really smart styling and you can see why we have been so impressed by the new Sorento. To cap it all, that €50,000 price tag (after the SEAI grant) is remarkably competitive for a car of this type.

If you are looking for a useable seven-seater and have €50,000 or more to spend then this car has to be on your shortlist. Even the biggest brand snobs will be forced to reconsider Kia when they weigh up this offering against rivals.