VW’s new Tiguan satisfies, but for how much longer?

Yes, it’s an impressive diesel SUV, but the clock is ticking… 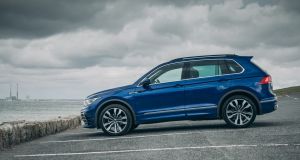 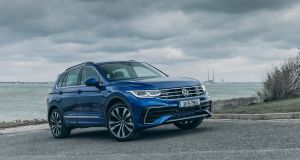 VW’s mid-life update for the Tiguan has, with due lack of surprise, sharpened and honed it without changing it much. 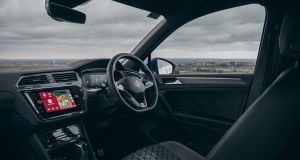 The inside boasts the latest MIB3 infotainment system, an eight-inch touchscreen, and a new digital instrument panel.

I still find it slightly odd to think that the Tiguan was, last year, Volkswagen’s best-selling car in Ireland. Maybe it’s an age thing, and that I still assume that the top-selling car from any brand really ought to be a hatchback of some sort. Maybe it’s because I still tend to look at a car through the prism of its outright price tag, rather than its monthly PCP payments. Maybe I’m just stuck in the past, but whatever my perspective, it is the large, roomy, quite pricey (by family car standards) Tiguan that is VW’s MVP in Ireland right now.

I would be rather surprised if this updated 2021 model sees any great shift in that regard – VW’s mid-life update for the Tiguan has, with due lack of surprise, sharpened and honed it without changing it much. Basically, it’s the same as before, but a little better in most regards, and fractionally more desirable thanks to styling tweaks at the front end that make it appear more Touareg-like. Touareg-lite? Just a little, yes.

There is, however, a major niggle with this new Tiguan right away. It’s powered by a diesel engine. I know, I know – clutch your pearls and ask someone to pass the smelling salts. A Volkswagen with a diesel mill carries connotations that many will still find rather toxic. Then again, VW is a company much changed and chastened by its Dieselgate experience, and this 150hp 2.0-litre TDI four-cylinder lump has much new technology, including a “double-dosing” AdBlue injection system that should, in theory, reduce the engine’s emissions of harmful NOX gases to a more socially and scientifically acceptable level.

All of which is good and reassuring stuff, and I’d be lying if I said other than that it’s very satisfying indeed to climb aboard a car and see a distance-to-empty reading north of 800km. There is also something equally old-school satisfying about the relatively refined thrum of a diesel, and the reassurance that grants you when wending your way home in filthy weather.

Still, it’s an inescapable fact that diesel is on an express route to obsolescence. Inescapable too that VW is about to put its rather impressive ID.4 – a Tiguan-sized SUV with all-electric power – on sale here in April. A final point which cannot be escaped is that this Tiguan, in R-Line specification, comes with a price tag, as tested, of €47,920, a figure that will unquestionably get you a reasonably-well-specced ID.4 or, for that matter, a mechanically identical Skoda Enyaq. Both of which will have running costs a fraction of those of the Tiguan, and both of which are future-proofed, so to speak.

In the here and now, the Tiguan remains impressive, in and of itself, and will – obsolescence or otherwise – still prove a tempting proposition to the 35.8 per cent of Irish car buyers, a majority share, who still choose diesel power for their new car.

The styling definitely looks sharper and more appealing than the rather snub-nosed look that the Tiguan once essayed. Our R-Line spec test car was wearing a sporty bodykit, which in terms of being bolted to an SUV is indeed rather like putting Nikes on a fat bloke, but which looked rather good all the same. The optional Lapiz Blue metallic paint and the 20-inch Suzuka alloys top the styling off rather nicely.

Inside, there is nothing dramatically new. There is the latest MIB3 infotainment system, with an eight-inch touchscreen, that provides you with more connectivity and live service options. There is a new digital instrument panel, which is pretty much equally informative and attractive. There is a new climate control panel, which is significantly easier on the brain and the finger than that used by the Golf.

The overall quality levels have also taken a step up, and while the cabin isn’t styled any differently, it does feel warmer and more welcoming. You can see the steady hands of the VW product planners at work. While the Tiguan has a distinct edge on the similarly sized Skoda Karoq when it comes to cabin quality, the also-related Audi Q3 has a clearly higher grade of interior fixtures. Even so, I think it’s the VW cabin that I prefer of the three. It is also massively spacious, and comfortable, and comes with a 615-litre boot for the stowage of shopping or, in my case, the stowage of a very tall Greyhound.

You’ll be expecting those big 20-inch rims to wreck the ride quality but, actually, somewhat surprisingly, they don’t. Yes, there is a sense of restless fidgetiness to the Tiguan’s ride quality, but the penalty for those aesthetics never becomes excessive. In handling terms?

Well, it’s a big family SUV, so you’re not going to find Golf GTI-levels of driver reward here. Not least because the combination of the 2.0-litre 150hp TDI engine and the seven-speed DSG dual clutch automatic gearbox makes the Tiguan feel rather lazy in its performance.

It’s not slow, and VW’s software experts seem to have tuned out the old low-rev hesitation of this combination, but it does take time to wind itself up, and so progress is always going to be more steady than snappy.

That’s true too of the in-corner performance. The steering is well weighted, but has a faint dead-patch just off-centre, so you need to take your time, to add lock and get the feedback working. It’s fine. It’s tidy. It’s reassuring. But fun? No, not really.

Then again, that’s not the point. The point of the Tiguan is that it’s big, it’s useful, it looks impressive when parked next to the neighbour’s car.

Thanks to those who cannot fit an EV charger to their house, or whose daily life consists of endless motorway runs (at about 5.7-litres per 100km, in our hands) and to those who can easily make the extra €80 a month PCP payments over a Golf, the Tiguan will probably retain its place in Ireland’s best-sellers list. For how much longer, though?

Verdict: About as good as a family-sized diesel SUV can be. But should you skip it and go electric with a 'Voltswagen'?