The ID.3 actually ticks just about every box, but crossovers are still king for Irish drivers 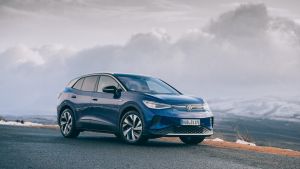 You would just assume that this one will be the big hitter. Like Beckham lining up a penalty, like Babe Ruth at the bat, like Dennis Priestley on the oche, this is going to be back of the net; a home run; one hundred and eighty.

VW’s ID.3 is already the best-selling electric car in Ireland, so combining the ID.3’s cutting-edge electric power with the bulky, appealing shape of an SUV should be – to mine another sporting metaphor – a slam dunk. Thus the ID.4’s job is clear: take the early success of the ID.3 and redouble it.

To do that, the ID.4 is going to have to convince us that it’s worth the cash. While Volkswagen is intent on “bringing electric cars to the masses” – never mind the clumsy ‘Voltswagen’ April Fool name change that, just for a minute, had us convinced that VW was going to drop the people from the people’s car – the fact is that its EVs are currently still on the pricey side.

Crucially, with the ID.4 1st Edition you get a 77kWh whopper that’s the biggest battery VW currently offers, comparable to that used by the Tesla Model Y Long Range

Or are they? Actually, no – not really. The cheapest ID.3, with a more-than-competitive 425km range, retails for €32,770 if you’re a private customer. That’s pricier than a basic Golf, for sure, but basically comparable with a well-specced version, especially considering the ID.3’s 204hp power output. And cheaper is to follow – later this year there’ll be a more basic, 330km-ranged, ID.3 with a sub-€30,000 price tag.

The ID.4 looks like decent value too, at least at first. The most basic ID.4 Life model retails for €34,436 (again, that’s for a private customer – business users miss out on the discount of the €5,000 SEAI grant) and has a 343km range. VW says this cheapest ID.4 is actually aimed at the likes of Opel’s Mokka-e, and Peugeot’s e-2008, which are broadly comparable in terms of price and range, but the ID.4 is a much bigger, more physically imposing car.

Our test version was an ID.4 1st Edition, which unsurprisingly is the spec of the first ones off the boat from Germany. For €42,423, you get 20-inch alloys, a 10-inch touchscreen, faster acceleration than standard, and faster charging too – up to 125kW if you can find a charging point equipped to deliver it. Crucially, you also get a 77kWh whopper that’s the biggest battery VW currently offers, comparable to that used by the Tesla Model Y Long Range. That gives you a claimed 519km one-charge range, which is impressive.

In fact, the first time I climbed aboard the first right-hand-drive ID.4 to arrive on these shores, it was showing a huge 600km before I’d need to find a plug. Sadly, that was as fictional as old-school fuel economy figures, but even in mixed driving with the heater going, you should easily coax it to 450km, although that might drop to 350km if you’re spending all your time on the motorway.

The huge battery is hugely impressive, and according to the projection on the sat-nav which shows you how far you can go (a cooling salve to the red-hot itch of range anxiety) I could have reached Waterford before needing to plug in as I left home in Belfast.

Objectively, with your accountant’s hat on, it’s the ID.3 all the way. But people don’t just want SUVs right now: they crave them, ignoring all rational arguments to the contrary

And there’s the rub for the ID.4. If you can have the big battery in the ID.3 (and you can); if you can have the same touchscreen, instruments, and switchgear (you can); and if the ID.3 is so roomy and spacious as to render the larger ID.4 just a touch pointless (yup, pretty much) then should you be spending the extra on the bulkier car?

Here, I’m afraid, we enter the realm of the objective versus the subjective.

Objectively, with your accountant’s hat on, it’s the ID.3 all the way. Yes, the ID.4 is roomier – both in the back seats and boot – but arguably not by the kind of margin that would make an enormous difference to many. Ultimately you will squash more shopping into the ID.4 with its deeper, squarer boot, but the ID.3 is perfectly roomy enough for almost all needs (it is, whisper it, really more of a small MPV than a hatchback).

The ID.3 is also better to drive than the ID.4, although the smaller car’s gain in dynamic terms is as slim as the larger car’s extra space. The 3 is a little smoother over bumps, leans a little less in corners and reacts a little more swiftly to steering inputs. The ID.4 is a tidy car to drive, and has that same wonderful, oleaginous (ironically) sensation as you accelerate. It will understeer sooner than the ID.3, though, and never feels as settled on a poor surface. On top of which, its extra weight definitely blunts acceleration.

So forget the ID.4 and just get the ID.3, then? Hmmm. Not so fast. You’re forgetting the subjective side of the argument. The fact is that people don’t just want SUVs right now; they positively crave them, ignoring all rational arguments to the contrary. The ID.4 is a handsome thing, too – arguably more so than the ID.3 thanks to its taller front end (which still bizarrely lacks any kind of under-bonnet storage) which is chunkier and bluffer.

Inside too, there are palpable differences. Thanks to a charging issue with our test car, mid-test I spent a day in an ID.3 and the ID.4’s cabin is noticeably better made and feels more plush. Again, these are narrow degrees of difference, but they are there. The ID.4’s driving position is better as well – while in the ID.3 you sit upright, as if at dinner, in the ID.4 you slouch in armchair-style.

It’s all but ineluctable that the ID.4 will be the more successful car of the two. The price gap isn’t so huge, model for comparable model, to hold it back, and the sheer weight (figurative and literal) of our SUV passion will probably nudge it in front of the ID.3 in time. The 3 is, euro for euro, the better car. But the ID.4 is very good, too.

I wonder if the whole ‘Voltswagen’ April Fool gag will affect it? Does it make VW seem like a more playful brand? Or one that foolishly and cack-handedly messed with its brand values? Either way, the ID.4 is probably a good enough car to rise above the fray.