New arrival is marketed as an all-electric crossover SUV, so it also boasts towing ability 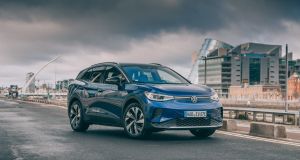 VW says 25% of sales will be for the high-spec versions of ID.4.

Volkswagen’s new all-electric ID.4 crossover has arrived in Irish showrooms, with prices starting at €34,436 after grants and incentives.

That’s the price of the 55kWh battery 148hp version – promising 343km range on a full charge – in City specification that’s dressed in 18in alloys. Step it up to the higher grade Style with 19in alloys, LED headlights and a rear view camera, and the price rises to €38,548.

In terms of equipment, a Business specification adds features like LED headlights, rear view camera and ambient interior lighting for €48,887. The Family version includes a panoramic sunroof, but the price goes to €50,365; a Tech version adds head-up display and increases the infotainment screen from 10 inches to 12 inches, while also offering electric front seats with massage function and an electric tailgate for €53,995.

Finally, the top of the range Max version features sports seats and dynamic chassis control for €57,810. There are several other options that can be added to the ID.4, such as 21in alloys for €932.

VW says 25 per cent of sales will be for the high-spec versions of ID.4, though a lot will depend on reports of a potential price cap being applied to the current SEAI grant of €5,000 for all-electric cars bought by private consumers. It has been suggested the Government is considering withdrawing the grant from cars priced above €60,000. Such a move would see the range-topping ID.4 Max version lose its grant.

While the ID.4’s price walk from €34,436 to €57,810 seems quite steep, the sales pitch in dealers will invariably be that if the car is bought through a Personal Contract Payment (PCP) deal, the monthly increase between the grades appears less dramatic. At present 48 per cent of sales of the car firm’s all-electric ID.3 are sold via finance, with the majority of these on PCP deals.

The ID.4 is marketed as an all-electric crossover SUV, so it also boasts towing ability, capable of pulling up to 1,200kg (or 750kg unbraked). An all-wheel drive version is also due in the near future.

For those who don’t need towing capabilities, an all-electric alternative may be found within the same showrooms in the form of a new variant of the recently launched ID.3.

VW Ireland is introducing a five-seater version of the top of the range ID.3 Tour, boasting the larger 77kWh battery that delivers a range of 542km, dressed in 19in alloys, featuring electric power seats with massage function, heads-up display and an array of other tech features for just over €40,000. So, in return for forgoing a few extra inches of wheelbase, you get a longer range between recharging and virtually the same specification as the range-topping ID.4, for up to €18,000 less.

Carbon neutral to your door

Finally, amid debates about the carbon footprint of new electric cars, VW is making a pretty powerful environmental pitch with its two electric cars: both models will be built and delivered with a carbon-neutral balance.

“Emissions are avoided wherever possible. In the meantime, the share of emissions during the manufacturing phase that are unavoidable in the short term will be successively reduced and offset through certified climate projects.

“As the first climate protection project, we are supporting our partner Permian Global in the Kantigan Mentaya Project in protecting 149,800 hectares of Indonesian rain forest, which absorbs large quantities of CO2.”

The same criteria is now being applied to the new ID.4.