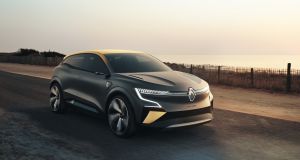 Megane eVision: the car is slightly shorter than the current Megane hatchback, but with similar dimensions to the Captur

Having established its electric credentials early on with the impressive little Zoe, and revealing an impressive new Clio last year, all eyes were on what Renault was planning to do with the Megane.

In what is a cut-throat hatchback market across Europe, the Megane has often struggled to find its space between on the one hand the German giants like VW Golf and its offshoots, and on the other the consumer rush towards crossovers.

However, one of the brand’s key strengths has always been its design studio, currently led by Laurens van den Acker. The Dutchman is held in high esteem across the motor industry, but he has now been joined at executive level by one of the most highly acclaimed auto bosses, Luca de Meo.

The Italian is now Renault’s chief executive, having steering Seat to safety and with a sales and marketing CV across several brands that includes credit for the revival of the Fiat 500 many years ago.

This duo is tasked with turning Renault into a cash cow and an exciting new Megane is a top priority. Enter the Megane eVision, an evolution on the current five-door hatch but now in pure-electric crossover form.

The fact that it still carries the Megane moniker is important, for there was talk earlier of the model range being killed off entirely. In technical terms, the new car – concept though it is at present – carries a 60kW battery pack under its floorpan, married to a 216bhp motor and with an expected range in the region of 450km between charges. In terms of its size, the car is slightly shorter than the current Megane hatchback, but with similar dimensions to the Captur.

After much boardroom turmoil involving Carlos Ghosn, its Nissan Alliance and French government shareholding, the company has put together an executive team with a track record for delivering what really matters: fresh motoring metal that people might actually want to buy.