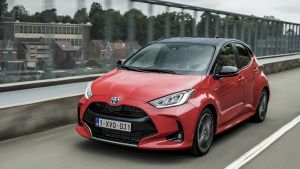 It’s understandable if motorists feel put upon these days. In the biggest spending budget in the history of the State, smokers and motorists were the only ones to incur tax increases. It’s not comfortable bedfellows for the auto trade, lumped in with the nicotine set.

In fairness though, the changes to motor tax only really impact on new cars and come into force in 12 weeks’ time. So any motorist hit by these taxes are bearing the burden with eyes wide open.

The real concern should be about the rise in fuel prices, impacting those for whom a new car is as likely as a Lotto win. These folk drive aren’t driving older, less fuel efficient cars out of choice. Just as most of them don’t live 60km from their place of work because they want to escape the big city life. And they often don’t have jobs where they can work from home.

Last week, figures from the Central Statistics Office showed the Republic ranked second highest among EU member states at 11.2 per cent in terms of the likelihood of workers having a one-way commute of one hour or more. Those living in the mideast region were the most likely to report having a one-way commuting time of one hour or more (19.4 per cent).

It may seem like a stereotype, but many us know people who face this dilemma: a daily one-way commute of 50km or more in a 10-year-old car that guzzles diesel. Hitting them with a rise in fuel taxes seems unfair. As with any tax on usage, we need to be sure that alternatives are in place for people before penalising those who may have little or no option but to continue as they are and stump up more of their limited cash.

Thankfully, when it comes to the changes to the motor tax regime on new cars there are options. One of them may be to reconsider the current craze for crossover SUVs.

Prior to last week’s budget, my colleague Neil Briscoe penned a very prescient piece. In it he compared the Irish sales charts from 2016 with those of 2020. “While it’s true that the car market has been sequentially and significantly changed by both Brexit and Covid, one thing is abundantly clear – give Irish drivers the chance, and they will buy bigger, heavier cars.

“In 2016 in the top 10 best-sellers’ list, there were only three crossovers or SUVs; four hatchbacks; two superminis; and one family saloon. By contrast, in 2020, there are five SUVs or crossovers; four hatchbacks; and a single, solitary supermini. Although their engine technology may be superior to that of older models, the inescapable fact is that larger, taller, heavier SUVS are simply less efficient, and more polluting, which rather wipes out the gains that may be found from trading up from an older car.”

He also referenced research published last year by the International Energy Agency that shows that an SUV will use about 25 per cent more energy than a lower-slung body shape with the same engine. “That profligacy means that the growth of SUVs has wiped out, and then some, advances made in fuel efficiency since 2010. The IEA estimates that improvements in engine design and aerodynamics have saved around 2 million barrels per day of oil consumption. The rise of the SUV, it estimates, has cost 3.3 million barrels per day in the same time period.”

It’s best left to sociologists to work out the psychological reasons for the allure of SUVs among suburban motorists, but clearly there is a role for SUVs as social signifiers, in much the same way that the prominence of the year on the numberplate has become a symbol of financial status.

But what many crossover buyers fail to appreciate – or perhaps choose to ignore – is that these crossovers neither drive as well nor are as efficient as an equivalent car.

We’ve been banging this drum for several years now but perhaps things might change now. Which brings us to the Yaris, Toyota perhaps not the first choice of many opting to move from a spacious SUV.

The move from SUV to supermini is probably a step too far for some, but don’t be so quick to dismiss it. For those with €20,000 or so to spend, there’s been a fleet of new arrivals that make this category of car more tempting than it has been for years.

The latest to land off the boat is the new Yaris, a one-time Irish favourite under this moniker but also the older Starlet name. And while Irish new car buyers have turned to SUVs, still today one in five cars sold these days is a supermini.

When it comes to this supermini, the message from Toyota has always been that it should be “affordable” but not “cheap”. The boss of the company – and scion of its founder – Akio Toyoda, claims to drive a Yaris as his daily runaround. “If people think of it as affordable, that’s okay. But we don’t want our customers to think of it as cheap,” he says. “I want the driver to feel that what they are driving is cool and attractive. Our challenge was to achieve this feeling in an affordable way.”

So what have they delivered? Well for start it’s built on a new architecture, part of a complete overhaul of the platforms across Toyota’s range. For the Yaris, it means its shorter than its rivals, but boasts a bigger wheelbase than the outgoing model.

It’s also noticeably stiffer and more rigid, so you get far less body roll in the bends. That often means you sacrifice something in the way of comfort, but tweaks to the suspension set-up seem to have taken care of this issue.

In terms of styling, the new car is like the outgoing model, but takes some cues in the rear from the more striking C-HR crossover, such as the lower angle of the rear C-pillar and the protruding rear-light clusters.

Inside, the most notable trait is a surprisingly roomy cabin, for those up front. The seating position is slightly lower than on the current car, and the steering wheel is more vertically angled than before. As for the controls, the touchscreen system of the new Corolla range makes its way into this Yaris. It’s functional and easy to use, but the cabin lacks the level of higher-end appeal on offer from some European rivals, like the new Renault Clio or Peugeot 208, for example.

The back seats hold the biggest surprise, with an impressive amount of legroom and ample headroom for a car in this class. Unfortunately, the rear styling touches do come at a price, paid by adults sitting in the back. The more prominent rear C-pillar is in your eyeline on either side, unless you sit forward to look out the side window. It all creates a sense of being cocooned in the rear, which isn’t great for long journeys. One impressive addition to the Yaris is a pair of centre seat airbags, between driver and passenger to keep them hitting each other during a side impact.

Up front, the focus will be on hybrid versions, powered by a new 1.5-litre three-cylinder petrol engine that’s combined with a lithium-ion battery. It promises to be 20 per cent more fuel efficient than the outgoing hybrid, while also being 27 per cent lighter and 15 per cent more powerful. Unfortunately, this version’s Irish arrival seems to have been delayed until later in the year and as yet we have no prices either.

So what we have here is the 1-litre petrol version. It’s an eager little engine, if a little noisy, certainly not as smooth as some rivals like the feisty little three-cylinder from Ford or the 95bhp 1-litre petrol engine on offer within the VW range.

Come January 1st, that also means the smaller entry-level engine rises into a higher VRT tax bracket of 16.5 per cent, while the larger, more powerful engine drops to 15 per cent tax.

Toyota reckons most of its new Yaris sales will be hybrids. If they get the price right that makes the most sense. And while this market is dominated by 1-litre engines or their ilk, it all adds up to a pretty convincing case for ignoring this 1-litre Yaris in favour of the 1.5-litre version.

That’s before you ever leave the Toyota showroom. Look elsewhere, and you start to see the sort of impressive competition facing up to the Yaris these days. In no particular order – and far from a comprehensive list – we could reference the new Renault Clio, the award-winning Peugeot 208, the Opel Corsa, the Hyundai i20 and the Mazda3 as pretty tempting alternatives. And for this sort of money you might also be tempted into a more spacious Skoda Scala.

Overall, the new Yaris is a smart-looking upgrade on a popular model that has a strong sales record on the Irish market. Its difficulty is that its arrival coincides with several seriously improved rivals, up against which it doesn’t have an edge, at least in this purely petrol version.

However, it serves as a worthwhile reminder that there’s a host of high-quality superminis now on the market, well worth consideration by buyers willing to make the leap out of over-hyped crossovers and back to more grounded cars.