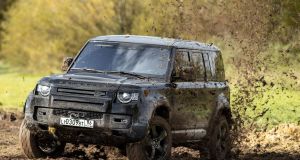 The Land Rover Defender: “Finished on the stunt course, I plod back to base. I think I’ve covered myself more in mud than glory, and Commander Bond remains elusively un-caught.”

It stands tall against a background of green grass, intimidatingly black all over. Arguably more intimidating again thanks to Russian number plates.

Open the mud-spattered door and, where most buyers would find leather seats and touchscreens, this one has a full roll cage, a massive self-sealing fuel tank, and just the two bucket seats with racing harnesses.

Sticking, like a misplaced telephone pole, out of the dashboard is the huge rod of a hydraulic handbrake, all the better to unsettle the car’s equilibrium.

This is a Land Rover Defender, but it is no ordinary one.

Last year, in the before-times, before Covid and before we knew what the new Defender would even look like, the first ten cars off the production line, from Land Rover’s spanking new factory in Slovakia, were secretively shipped off to Scotland, and into the care of Lee Morrison.

Lee, tall and slim, with a stubble beard and a Harley-Davidson baseball cap, is the driving stunt co-ordinator for the latest James Bond film, No Time To Die.

It’s his job to ensure the maximum possible level of on-screen vehicular carnage, and tougher still, to make it all look spectacularly dangerous, when it’s in reality all incredibly safe.

Hence the roll-cage and the fuel cell. With No Time To Die’s release date pushed back once again, this time until April 2021 (and you don’t even need to ask why) it was time to Mohammed to go to the mountain, so to speak.

If we were to experience anything of Daniel Craig’s last outing as 007in 2020, we’d have to go and just drive the stunt Land Rovers ourselves.

“It’s not just about doing one take and then you’ve got 45-minutes to reset, the cars have to be going the whole time” Morrison told The Irish Times.

“When I designed the stunt sequence for the Defenders, I was over the moon because I just knew it was going to look spectacular. But then you get into the mechanics of actually filming it, of fighting the weather up in Scotland on location, of having two helicopters in the air, of filming in an actual river, and suddenly your problems start mounting up.”

One particular problem was that the Defender, at that point, had yet to have its public debut at the Frankfurt motor show. No-one outside of Land Rover was supposed to know what it looked like, yet here were 10 of them, thrilling and spilling all over the Scottish Highlands, Salisbury, and Windsor in front of a 700-strong film crew.

The cars actually had to be covered up in special disguises for the short run on public roads to and from the actual set, to keep prying eyes away. It worked, though – the big reveal at Frankfurt remained something of a surprise.

“We get a brief from the director about what they need, a brief of time, of running time, and then it’s all about making sure that the action we’re shooting is punctuating a really amazing story,” says Morrison.

That action includes a spectacular jump, where three Defenders fly through the air in side-by-side unison. The jump was originally set up to be rather less massive, but eventually Morrison and his stunt team realised that the Defender really could fly quite well, and land without toppling over. Eventually, the finished, filmed, jump saw the three cars covering a massive 30-metres in the air.

Well, there may be no time to die, but there is time to drive and it’s time to hoist aboard the big, black, stunt car. Appropriately, as one of the first 10 Defenders built, this one bears chassis number 007, so Land Rover asked the stunt team to try not to utterly destroy it, and preferably to preserve it for posterity.

Morrison says that the cars ran non-stop all day and every day of the shoot, testament to the cars’ strength.

Mind you, there were rumours that Land Rover mechanics were then having to pull all-nighters to keep the fleet of 10 running properly for each shooting day. Given that these were the first handful of cars built, and were working to the rigours and tight time margins of a film set, perhaps we can forgive them that.

Inside, the 007 Defender is a riot of cheap black plastic (no soft-touch trim for stunt cars), and buttock-clenching bucket seats. I’m cinched tight into a six-point harness, having first clambered over the scaffold of a rally-style roll-cage.

Well, if you’re going to chuck cars through the air, then you have to make sure that the drivers are protected. Morrison has laid out a simple stunt track on a muddy field, demarcated by straw bales, so we won’t be getting air under the axles today.

To start the car, you press a cheap-looking aftermarket button that switches on the fuel pump in the safety tank, which whines through the empty cabin like a dentist’s drill. The engine – the new 400hp 3.0-litre straight-six petrol unit – has clearly been abused as its throttle response is incredibly inconsistent and it sounds like someone’s letting off hand grenades in a hardware shop under the bonnet. But, when it comes on song, it’s properly quick and the big, heavily-treaded tyres grasp and gnash at the soft, loamy surface beneath.

As he laconically directs me through the hay-bale course, Morrison gives away a few of the secrets of stunt film-making.

“You can plan and plan and plan, but then on the day, on the set, sometimes you just have to pull something out of your hat. Up in Scotland, we were working on those big jumps and rolls, and there’s this massive bed of rocks just under the surface of the grass, so we had to constantly change things and work around that. Our first recce up in Scotland, picking the shooting location, the locals thought we were mad to be filming up there.”

The hay-bale course isn’t exactly taxing, but it’s made more difficult by the conditions. Dry today, but it’s been raining pretty solidly for the preceding week, and the combination of a throttle that seems unable to make up its mind, and soft, cloying earth clinging to the tyres means we shunt and stagger around the course. I’m wildly conscious of my severe inability to make the Defender pirouette or leap like one of Morrison’s team.

Like, perhaps, Jessica Hawkins. Hawkins is small, slight, and with a steely stare that could bore a hole right through your skull. It was she who took the first flight in the Defender during filming.

“When I first saw it, it was a bit daunting” Jess tells The Irish Times. I thought ‘Are you sure Lee?’ When I first did the run, we started at about 65km/h and then built it up to 85km/h and as you hit the bottom of the ramp, you think ‘Oh God, this is going to hurt. . .’ There was a moment when I was mid-air and all you can see is sky. Testament to the car though, it never did hurt, and they blew the massive expectations we had of them out of the water.”

According to Morrison, the Defenders didn’t even require ballast to keep them level and make sure they landed on all four wheels properly. A Defender that flies, who’ve thunk it?

Finished on the stunt course, I plod back to base. I think I’ve covered myself more in mud than glory, and Commander Bond remains elusively un-caught. Then again, the black Defender is one of the bad guy’s cars, so I suppose it wouldn’t do for me to be too quick in it.