Volkswagen tops its Golf range with a new GTI Clubsport 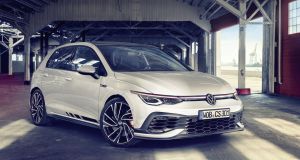 While all eyes are on Volkswagen’s all-electric ID.3 these days, the German car giant hasn’t forgotten its petrolhead fanbase. It’s also eager to remind everyone there are a few more chapters left in the story of its Golf range.

With that in mind it has unveiled its new Golf GTI Clubsport, the 296bhp powerhouse flagship of the current eighth generation of the hatchback.

Arriving in Ireland next January and with prices expected to start circa €53,000, the news car boasts 55bhp more than “regular” GTI, capable of 0-100km/h in under 6 seconds and with a top speed capped at 250km/h.

VW’s Golf GTI has a well-established band of loyal followers, with a whopping 2.3 million sold to date since its introduction in 1976, and the Clubsport arrived in 2016 to become the cherry on top.

This latest version is powered by 2-litre tubocharged petrol engine that puts out 400Nm of torque - 30Nm more than the standard GTI. It’s also lower than the regular Golf, by 15mm and sits on specifically tuned McPherson front axle and a four-link rear axle. As for its driving dynamics, these were honed on the famous Nürburgring where the new ClubSport managed to be up to 13 seconds per lap faster on the Nordschleife than the Golf GTI.