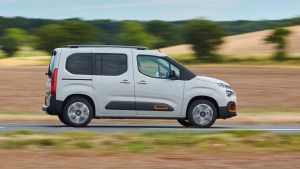 If, as many posit, the coronavirus crisis is our generation’s equivalent of the second World War, then – assuming that history to an extent repeats – we’re in for a bevy of wonderful, affordable cars in the coming decades.

The horrors of war begat an explosion in vehicle engineering that gave us the VW Beetle, Morris Minor, original Mini and, of course, Citroen 2CV.

In fact, the 2CV had been in development before hostilities began. But the prototypes (with their corrugated steel skin and single headlights) were hidden away – like state secrets, or fine champagne, which in France amounts to the same thing – to prevent their technology falling into enemy hands.

Finally, when it was revealed to the public in 1948 the 2CV was destined to stay on sale for 40 years. And it played a huge part in the post-war regeneration of France and Europe.

Now, while we wait for the virus crisis to pass, we probably already have our new 2CV – the Citroen Berlingo. It’s arguable whether a relatively mechanically conservative van-based family car, which can also be bought with Peugeot, Toyota, or Opel badges, truly deserves the title of successor to the beloved Tin Snail. I’m not going to absolutely claim that the Berlingo is the true spiritual successor to that original roly-poly 2CV, but you can draw your own conclusions when it comes to Citroen creating an affordable, frugal, practical, softly-sprung car that has a frisson of quirky style about it.

It also feels apposite to be trying out the Berlingo at a time of upheaval for the Citroen brand in Ireland. Having been managed for the past five years by the IM Group (which also acts as the importer for Subaru) Citroen is now moving import houses. As of April next year, it is likely to return to sit alongside its sister brands Peugeot and Opel at Gowan Distributors.

Gowan had previously been the Citroen importer for more than 25 years but – as per the general background of turmoil and difficulty to this story – rescinded it in 2009 as the Irish car market collapsed in face of the financial crisis. Clearly, Gowan’s must see something special, once again, in the tin-snail brand as we approach yet another huge inflection point in Ireland’s motoring history.

Instead of a tin snail, this one is more of a tin shed, but I mean that in a good way. As soon as you crack open a door, you can soon see that the Berlingo’s idea of what makes a practical family car is some way ahead of its two EMP2 [efficient modular platform] cousins. First off, those two rear side doors slide, which is of inestimable benefits when parking in tight places (have you seen how narrow the spaces are in Merchant’s Quay these days?) so getting people in and out of the back is just so much easier.

There are also three, individual, seats in the back. Now that’s something that, in fairness, the C5 Aircross and C4 SpaceTourer also offer, but it puts Citroen ahead of most of the competition when it comes to carrying children around. It’s just so much easier to sort out booster seats and baby seats when there’s a proper, full-sized pew in the centre of the rear.

You can have the Berlingo in two wheelbases – our test car was the M for medium sized version, 4.4m (14.4ft) long, with five seats and a large boot. You can get a longer 4.75m version, which comes with seven seats and a boot that counts as colossal. In the long one those extra seats slide and can be lifted out completely. Apparently, there are 48 possible seating configurations but the most important figures are the boot volume numbers.

If you’ve got a bad Ikea habit, this is the car for you. Without troubling the middle-row passengers, a standard wheelbase Berlingo can swallow as much as 775 litres of cargo and that’s below the luggage cover. For the long-wheelbase model that expands to 1,050 litres, which is simply enormous. Fold all the back seats and you can cram it with 4,000 litres worth of whatever it is you need to carry. I don’t know about you, but as a family man with two increasingly tall boys and a pet greyhound that likes to stretch out, boot measurements such as these are as desirable as the acceleration times for a Ferrari Testarossa. Maybe more so.

Those children and that dog are also welcome to do their worst when it comes to the rest of the interior. You could criticise the fact that, because the Berlingo is van-based, its cabin plastics and fixtures and fittings are relatively cheap and unglossy. Or you could take the view that offspring and canine are going to destroy it all anyway and shiny, hard, plastics are easier to wipe clean. So have at it lads.

One word of warning when it comes to the front seats, though: those that use Citroen’s advanced-comfort are designed to be as restful as possible. Now, I love a good, squashy, armchair-like seat, but I have issues with these Citroen perches. For some reason, they just don’t agree with my back and both these and the similar seats in the C5 Aircross left me with aches and pains all down my spine and legs. To be fair, the also-similar seats in the smaller C3 are fine for me, and you might find the Berlingo entirely comfy but I’d suggest taking a lengthy test drive to be sure.

That lengthy test drive will reveal a chassis that simply doesn’t like to be rushed. The steering is light, and disconnected in feel, and the suspension’s responses are languid at best. The upside of that is that the Berlingo’s ride quality is relaxed and comfortable, but this is not a car in which you will feel the sheer thrill of clipping a late apex.

Equally, the 1.5-litre 100hp diesel engine prefers to be left alone to chug along, rather than stretched to its red line. Keep things quiet and its refined and frugal, but start asking too much of it and it becomes shouty and gravelly. Such sporty concerns are the preserve of lower-slung German rivals. Think back, instead, to the great French family cars of the past – the original Renault Espace and R16 (not the first hatchback, but the best first hatchback), Peugeot 504 and Citroen DS.

These were cars that prioritised comfort and rugged mechanicals par dessus tout, and that’s what the Berlingo does too. It, through its dynamic performance, makes you drive in a more relaxed fashion, one more amenable to the recent move to reduce the speed limits on French main roads to 80km/h. Prends ton temps. Arrêtez-vous, et sentez les roses.

At €26,945, this Berlingo is much more affordable – especially on a cabin-volume-per-euro basis – than its SUV or MPV rivals, and arguably its more demure appearance will be a better fit for the financially straightened times which lie ahead. As was the case in 1948, when crises pass, simplicity wins.