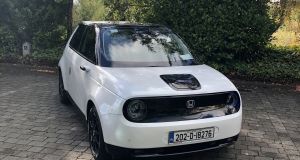 It has been a long-time coming, but Honda’s cute all-electric e model has finally arrived in Irish showrooms. Although only 50 will land this year, the plan is that five of the Japanese brand’s Irish dealers will be retailing the new model for 2021.

With prices starting at €29,995, the Honda e has its sights firmly set on targeting the recently launched all-electric Mini. As with that car, the Honda is focused on urban commuters, due to its rather limited range of 200km between charges.

According to a Honda spokesman, the decision from the outset was to develop a car for commuters that kept the costs down while offering practical range. The more range you add, the bigger the battery and the higher the price: hence the decision to opt for this small car format and the 200km battery range.

Inside, the aim was to create a cabin with a livingroom feel, right through to the use of furniture-style upholstery on the seats.

Facing the driver and front-seat passenger is an array of touchscreens, but the main talking point is the decision to replace side mirrors with cameras as standard issue. The video streams to two screen on either side of the dash. Audi has trialled this as an option on its e-tron crossover, with limited success. After an hour in the Honda e around town, we’re still not convinced of the merit of this technology over a standard mirror, but we’ll reserve our final call on that until we get to spend more time with the car.

Certainly the cabin will appeal to the image-conscious young urban commuters who want to change to electric and the exterior styling, a retro take on 1970s iterations of the Civic, will win it fans as well.