The outside world might be a mess, but you can still strap on a helmet and have some fun 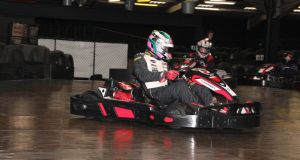 Karting remains a relatively Covid-friendly activity, and one that you can have great fun with

Is driving in terminal decline? Even though such car makers as Porsche and Mazda have promised that they’ll have to have steering wheel prised from their cold, dead, corporate hands, there does seem to be a slippery slope to the end of actual control of a moving vehicle.

In spite of years of over-promising and under-delivering, autonomous vehicle development continues, and that’s on top of the need for all of us to drive rather less in order that we can still have a planet on which to drive. For those of us who, genuinely and yes, even now, love driving, that’s a rather depressing thought. And that doesn’t even bring the dreaded Covid-19 crisis into the mix.

There is a cure. Well, perhaps more of a respite cure than a vaccine, but nonetheless there is something you can do to at least temporarily blow those clouds of deep funk away. Go-karting, which can be taken as both noun and instruction.

Few with access to YouTube will have missed the extraordinary scenes of young Italian karting racer Luca Corbreri using actual, physical violence against a rival in revenge for some slight, perceived or other, so you may be wondering how karting can be a balm, if it can drive some to such extremes. Fear not. Crobreri’s outburst was in the heat of competition, and we’re not doing that. We’re just rocking up at a local go-kart track for a bit of fun.

By local we mean Kylemore Karting on the Killeen Road in west Dublin. Like most indoor karting venues, this one is housed in what is, from the outside, a nondescript industrial estate tin shed. Ah, but this one is rather different. It has heritage.

You see, Kylemore Karting was originally established in the 1990s by the late, great, Stuart Cosgrave. Cosgrave it was who originally designed and helped to build Mondello Park, still Ireland’s only proper race track. He also had a hand in running the likes of Brands Hatch and Donnington Park race tracks in the 1980s, so it’s fair to say that the man knew his racing onions.

You don’t have to be a raving car-nut to enjoy karting. It does help, of course

These days Kylemore is still in family hands, with Cosgrave’s grandson, the appropriately-named Kyle Kennedy, the track’s managing director. “When Stuart was in England in the eighties and nineties, he saw karting starting up, and he just thought – holy god – with the finances needed for a big track, here was a chance for some entry-level motor sport that would be available to everyone. So he actually started a small track, almost like a kiddie track, at Spawell in 1992, but Kylemore Karting itself would start up later that year.”

Originally that was just one, flat, track laid out in a warehouse. Eventually, the track would get an artificial hill, allowing for some more exciting racing, and even the odd banked corner. Now, Kylemore has three tracks, spread across multiple levels, and all with challenging gradients and corners.

You don’t have to be a raving car-nut to enjoy karting. It does help, of course, and the likes of Damon Hill and Eddie Irvine have both graced the tracks at Kylemore.

Some rather less motor-focused types have donned the racing suits and helmets though. Westlife. Cillian Murphy. Jon Bon Jovi. Even Lady Gaga, whom we choose to believe raced in a racing suit made of old suitcases and a helmet carved from a single oak tree. (She didn’t – in fact, her appearance at Kylemore was actually more about some fun for her band and back-stage team, but don’t spoil our fantasies, eh?).

The good news is that, celebrity or otherwise, you can still enjoy karting in the age of coronavirus. Kylemore has the expected one-way systems, hand sanitising, and perspex screens but above and beyond that, here is a sport in which you wear the ultimate in face-coverings anyway, and unless your overtaking goes really, really wrong, you’re not going to be getting close to your fellow racers once you’re on the track.

Kylemore has managed to remain open since the original lockdown was lifted, and used the downtime to make improvements to the tracks and timing screens, including building a new waiting/viewing room over by Track Two. “From the get-go, we were asking ourselves how we could open up again, and do it safely, just being sensible about one-way systems and sanitisation and personal space and so on” said Kennedy.

While corporate bookings and stag-parties – the traditional mainstays of any karting track’s business model – have fallen by the wayside, and while groups have to be restricted to six people per session, business has not flagged too badly for Kylemore, and some companies have been making tentative inquiries about Christmas events. “If you’re confident in what you do, things tend to have a way of working out” said Kennedy.

Right, enough business, let’s get on track. I’ve rolled up with my youngest son, who has twin advantages of weight and an encyclopaedic knowledge of Formula One over me. Having strapped on our sanitised helmets and suits, we head out to the karts. Made by French karting supplier Sodikart, they have single-cylinder engines, generally Honda-designed units, with around 270cc. Not much, but enough to shove these little, lightweight chassis along at as much as 80km/h.

Visor down, lights out, and… my son is gone. Like, way off into the distance as my kart struggles to shift my bulk along the track, with its combination of tarmac and wooden surfaces. Track One is tight and twisty, of course, with a very fast downhill section that leads to a hairpin right, and which requires a dab of the brakes to set you up for the corner, or you’ll either scrub off too much speed in a slide or – if you’re me – massively over-cook it and slam sideways into the tyre barrier, leaving yourself with a bruise and a slow laptime. That’s what I get for trying to keep up with someone much, much quicker than me.

Perhaps that speed means my son has a shot at the racing big-time? It’s not quite so fanciful as it seems. Damien Faulkner got an early start with karting at Kylemore and went on to win the Porsche Supercup championship and raced at the 24hrs of Daytona. Likewise, Aaron Smith got a karting start, before competing in the British Touring Car Championship, and now races in the prestigious Blancpain GT series. There is, in other words, hope.

Not for me, obviously. I’m far too old and wheezy. But Kennedy wants Kylemore to continue its tradition of not just being for fun, but also for actively promoting and propelling Irish racing talent. “We recognise that we have a place in Irish motor sport, and we want to make sure we can pay that back, especially with the kids. They just get engrossed, and it’s great to see.”

Informal discussions have taken place with the likes of Mondello Park and Motorsport Ireland to put in place a staircase where children who show talent in karts can be given a chance in more serious machinery. It’s on the back burner, for now, but would be great to see.

In the meantime, karting remains a relatively Covid-friendly activity, and one that you can have great fun with. Not to mention reminding you of how much better driving feels when you, rather than the computers, are in charge…

No doctor, no pharmacy, no supermarket: I’m moving to an island
6