New-car sales are set to rise. Here’s how to make the most of your purchase 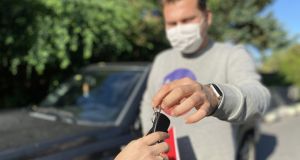 Click and deliver rules mean click and drive right from your home, and it’s the way of the future. Photograph: iStock

As we move steadily towards the 2030 deadline for the end of new diesel and petrol engine sales, there’s a strong sense of why wait? After all, an ever-increasing number of electric cars are on sale, and if you don’t fancy going fully electric, there are some excellent hybrids and plug-in hybrids hitting the market.

Toyota’s hybrid Corolla is already a best-seller in Ireland, so clearly lots of you are already cottoning on to the benefits of going at least partially electric, and the Japanese giant has some more hybrid models arriving in 2021, including the seven-seat Highlander SUV, an updated Camry saloon, and the cute-as-a-button Yaris Cross small crossover.

VW, which has seen massive success with its all-electric ID.3 in 2020, will follow that up in 2021 with the all-electric ID.4 SUV and a positive glut of plug-in hybrid models including the Skoda Octavia, Seat Leon, VW Golf (as well as a sporty GTE plug-in), Seat Ateca SUV, Audi Q3 and many more.

Hyundai now has a hybrid version of its popular Kona crossover, to sit alongside the conventional petrol and diesel and electric versions, while there will also be a hybrid version of the dramatically styled new Tucson, which will itself be joined by a plug-in hybrid model later in the year.

For those looking for a bargain electric car, MG is returning to Ireland, now with a range of Chinese-built SUVs and an estate car, all powered either by battery or a plug-in hybrid system. Prices start from €28,995 for the electric ZS crossover.

Basically, if you’re looking for a new car in 2021, the chances are that there’s going to be a version with a battery and a plug, so you may as well start giving into the electric revolution.

2. Be realistic with your discount demands

The temptation will be to march into your local dealer (or Zoom call them online) and demand half the price knocked off. You’ll be assuming that with Covid having banjaxed car sales in 2020 that dealers will be desperate for sales, and the discount red carpet will be rolled out for you. Hmmm. Perhaps not.

Sales actually picked up quite a bit in the latter half of the year, and while Irish dealers certainly suffered in 2020, the early numbers for 2021 are looking up, so the need for dramatic discounts will be lessened. On top of which, dealers operate on a wafer-thin profit margin on new car sales as it is, so if you go in asking for “a deal for cash” or some such, bear in mind that you might be expecting the dealer to sell at a loss, which they’re not going to do.

So, be polite, manage your expectations, and negotiate politely. Deals are there to be done, but the process works both ways.

3. But what if you want a real bargain?

Finding a real bargain in the new car market is all about timing. For a start, keep an eye on the motoring pages and the specialist car publications and see when new or facelifted versions of models are arriving on the market. Importers and dealers often offer good deals on “run-out” versions of the outgoing model, and while you might not get a bundle of cash knocked off the price, you might well get a model with upgraded equipment for the same price.

Will you be getting an older design? Yes, but in many cases that hardly matters. Take the VW Golf for example. There’s a strong argument to be made that the last-of-the-line MkVII Golf was actually a better car than the brand new MkVIII.

If you don’t fancy that, simply time your arrival carefully. Aim to buy a car at the end of a month, or better yet at the end of a quarter (the end of March will be the end of the first quarter). At that point, dealers are keen to make up their final monthly and quarterly figures, and so may well be keen simply to shift metal off the lot. If you’re prepared to buy from stock, rather than carefully choose and spec your own colours and equipment, that can lead to a serious bargain.

Or, conversely, leave your buying to a day or two after month or quarter’s end, and see if the dealer has done any last-minute pre-registering of cars to meet their targets. These cars will usually be offered as “ex-demo” and while you’ll have to put up with being the second owner in the logbook, rather than the first, you can find what’s basically a brand new car with thousands off the price tag.

Previously, there’s been clear advantages in importing a car from the UK, thanks to the value of sterling taking such a hammering since the Brexit vote in 2016. In many cases, buyers have been able to save as much as €5,000 (sometimes more) compared with the same used car on sale in Ireland, and have been able to find more choice in the UK market too.

Now, though, the gap is narrowing. The introduction of the NOX levy on imports in 2020 increased the cost of importing older diesel models, which rather took the shine off, and obviously Covid restrictions can make getting to and from the UK rather tricky.

The final withdrawal of the UK from the EU on January 1st, 2021 now has major implications, which will make it far more expensive, and more complicated, to import a car from the UK to Ireland – with certain exceptions.

Basically, if you’re bringing in an import now, you need to first fill out a customs declaration form, and do so before physically bringing the car into the State. Then, you’ll have to pay import duty (sometimes referred to as customs duty) of 10 per cent of the value of the vehicle, plus carriage and shipping charges. Then you’ll have to pay your usual Vehicle Registration Tax (VRT) and NOX Levy, but for cars coming from (specifically) Britain, VAT at 21 per cent will now be charged, regardless of the age of the vehicle. Previously, VAT was charged only on new car, or used cars less than six months old or with fewer than 6,000km on the clock.

The major exception to all these new rules and charges is Northern Ireland. Import a car from the North and you won’t pay customs duty, and you’ll have to pay only the 21 per cent VAT if it’s a new car.

Customs duty is also not charged on cars that are built within the UK, but tread carefully here as a large percentage of the parts much originate in the UK for this exemption to apply.

You’ve gone to the showroom (physically or digitally) and picked out the shiny new wheels of your dreams. Now, to pay for it. A growing number of consumers are taking out PCP deals (Personal Contract Plan) to finance their new cars, but these deals are not like a conventional loan, and the Competition and Consumer Protection Commission (CCPC) has previously warned that such deals are not well understood by the average consumer. They’re also easy to confuse with more traditional Hire Purchase agreements, so make sure you’ve done your homework, and don’t get seduced in by apparently low monthly repayments. Read the fine print, make sure you know what you’re getting into, and make sure you can afford the repayments (and any final lump-sum payment) in the long term.

As we are now in the third lockdown, that’s going to put a dent in new car sales again this year. However, it doesn’t need to. Pretty much every major importer and dealer group learned fast in 2020 that selling online – as opposed to simply advertising – could work for Irish buyers. Almost all can now offer video tours of cars that they’re selling, while all major brands have online configurators allowing you to pick and choose your colours and equipment (which are quite good fun to play with anyway). Increasingly, trade-in valuations are moving online, as are finance applications and approval. Finally, most will now deliver a sanitised car to your door upon completion of the sale. Click and deliver means click and drive right from your home, and it’s the way of the future.