Now that nitrogen oxides look like forming part of our car taxation system, which cars will hit your pocket the hardest? And which the softest? 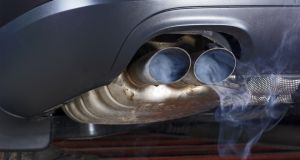 The Vehicle Certification Agency’s website is, rather obviously, the official one and it’s the one whose numbers are likely to be accepted here by those rubber stamping such things

The two websites you’re likely to need the most in the coming weeks, as you work out which new car to buy (or which old car to import) will be that of the UK’s Vehicle Certification Agency and Emissionsfinder.com. That’s where you’ll find the most reliable figures for nitrogen oxide emissions, albeit both websites have their issues, which we’ll come to in a moment.

Most of us probably thought that nitrogen oxide was laughing gas. It’s not, that’s nitrous oxide. Nitrogen oxide (NOx) is not funny at all - it’s a tasteless, odourless gas that can cause serious respiratory illness and even, in extreme cases, death.

It’s the gas at the centre of the diesel emissions scandal that has been rumbling along since 2016. Basically, diesel engines pump out more NOx than their petrol equivalents, unless expensive and complex exhaust treatment systems are used. So many car makers (not just Volkswagen, but VW became the headline act in this particular drama) decided to cheat - use these systems only when the car was being tested in the lab, and the rest of the time let the NOx emissions run freely.

The impact on public health and public perception, once this chicanery was revealed, was profound. Diesel sales plummeted across Europe and in Ireland, and now we have a new vehicle taxation system that includes NOx as a component in deciding how much you’re going to pay for your new car. The new calculation, introduced as part of wide-ranging changes in Budget 2020, is designed to further push buyers away from diesel, and ultimately towards fully-electric cars.

Of all cars that ‘benefit’ most from these changes to the tax system, it’s those electric cars that do the best. The emit nothing at the point of use - no carbon dioxide, no NOx - so for now fully electric vehicles will continue to enjoy the lowest possible tax charges.

Of those more conventional cars that do best under the new regime, perhaps unsurprisingly, it’s hybrids and plugin-hybrids that perform the best. Toyota’s big-selling Corolla Hybrid, for example, has NOx emissions of just 3mg/km (against an enforced limit of 80mg/km). Compare that to the similarly-sized Ford Focus 1.5 EcoBlue diesel, which has NOx emissions of 49mg/km. That means you’ll pay extra for your new Focus diesel, and that’s even before Vehicle Registration Tax (VRT) is applied.

Many plugin-hybrids also do extremely well when it comes to official NOx figures (for instance the vast Volvo XC90 T8 Twin Engine has official NOx emissions of just 16mg/km) - but don’t expect that to last. The EU is already in the process of tightening up how NOx is officially measured and calculated, and as with the official fuel economy figures for a plugin hybrid, the NOx number has a more than fictional feel to it for most models right now. For the moment, though, a plugin-hybrid could be a very canny buy, as only the official number as it currently stands will be used by the tax man.

The Government may use a NOx tax as a deterrent to those seeking to import a used diesel car from the UK could well prove effective - taking the top ten most imported vehicles right now, 71 per cent of which are diesel engined, the VW Golf 1.6 TDI from 2013 onwards has NOx emissions of 118mg/km.

These could all add up to a substantial extra bill when importing one. Enough to put off the 82,000 buyers who’ve shopped across the border this year? We’ll have to wait and see. As for the effect on new prices, there’s going to be a great deal of juggling in the coming months as car makers adjust their lineups to suit the new regime, and you can expect to see more than a few ‘we’ll pay your NOx tax’ offers as importers seek to shift stock that falls afoul of the tax bands.

Now, there is a final caveat. The only figure that really matters is the one on the Certificate Of Conformity for the car you’re buying. That’s its birth cert, and that’s the final word on what that car’s NOx emissions are.

The Vehicle Certification Agency’s website is, rather obviously, the official one and it’s the one whose numbers are likely to be accepted here by those rubber stamping such things. But it’s awkward to use, and often is missing data for major models (usually while that data is being updated).

Emissionsfinder.com is much, much easier and quicker to use, but its numbers won’t necessarily stack up when it comes to convincing Revenue how much NOx tax you’ll have to pay when it comes to importing a car. Use it as a guide rather than gospel. Now it’s all down to the Minister for Finance Paschal Donohoe and whether he introduces a charge on new cars and used imports based on NOx emissions ,and what rate he sets. We’ll know the answer Tuesday afternoon.

Covid-19: The latest on vaccines, antibody tests and treatments
4

Bloom to Zoom: the garden fest is online this weekend with chats and tips
8