23 years on, a chance to drive an iconic A80 Supra back-to-back with the new model 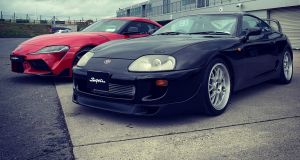 I was a mere 21 years old, and enjoying a few week’s work experience at the grand old lady of motoring magazines, Autocar. Having been a reader of that magazine since I was a pre-teen, you can imagine that this was a dream assignment. Looking back, I can now see that - as with any work experience kid who wanders in the door - I was being given the dogsbody jobs. Sorting out the filing cabinets full of press photos. Tabulating the road test results figures in the back of the magazine. Being thrown an occasional bone of writing a line or two that may or may not make it into print. I loved every single second.

None more so than when, on my last afternoon, then deputy editor Mark Harrop took pity on me and let me actually drive something. Well, not just something - something rather special. Autocar’s long-term test Toyota Supra. Now, to put this in context, my only driving experience up to this point had been in my dad’s 1.6-litre Ford Sierra, a car with about 90hp on a good day. Now, I was being flung the keys to a proper sports car, one with a massive pram-handle rear spoiler and an entirely fictional 276hp power output (the real output was probably closer to 300hp).

Nervously, I trickled out of the car park, and down the street, headed for the nearby slip road which lead onto the M3 motorway. With an empty slip in front of me, I finally screwed up the courage to nail the throttle…

23 years later, I’ve just been given the chance to do so again, but this time I’ve not actually taken it. When I flattened the right-hand pedal of that A80 Supra back in 1996, it was a pristine press car, one that I obviously felt responsible for but equally one which, if I’d pranged it, would have meant little enough to a corporate behemoth such as Toyota (although my own career would probably have been still-born at that point had I stuffed it into the barriers).

Few people are daft enough to trust their own pride and joy to a ham-fisted, lead-footed motoring journalist, but Eamonn was - thankfully - that daft"

Now in 2019, on a blustery, showery, Thursday afternoon at Mondello Park, I was a little more reticent. Mostly because the owner of the A80 in question, Eamonn Carney, was sitting next to me. Few people are daft enough to trust their own pride and joy to a ham-fisted, lead-footed motoring journalist, but Eamonn was - thankfully - that daft. He’s actually owned this particular A80 twice - first buying it ten years ago, then selling it to a mate, and then eventually buying it back. He’s, not surprisingly, a massive Japanese performance car fan. “I always wanted one of these” he tells me, as I try to be in-cred-ib-ly delicate with my gearshifts and braking points. “I was always a fan of this and the Nissan GT-R. I have a GT-R at home as well, so now I have the two of them. There’s nothing else out there, really, that appeals to me as much. These are a great car, I love the way the cockpit wraps around you in here.”

Eamonn has modified his Supra, as is so common amongst Supra owners, but he’s not spoiled the originality much. “This was actually a non-turbo model, when it was new, so I’ve replaced the original straight-six with an engine from a Toyota Risto. Had to modify it a bit, change the sump and so on, add an intercooler and that kind of thing, but it’s basically stock.”

One of the little gems of info regarding the new Supra is that this engine, the legendary 3.0-litre ‘2JZ’ straight-six, will actually squeeze into its engine bay. Given the engine’s iconic status (it can be easily tuned past 1,000hp without too much effort) would Eamonn ever consider modifying a new Supra to take the classic engine? “No, I don’t think I would. The engines are designed to suit each car, so this engine suits this car perfectly, and I don’t think even things like the power delivery would suit the new car.”

As a Supra-head, though, what does he make of the new A90 Supra, a car already controversial among many fans for using a plethora of BMW parts, even a BMW engine? “Well, obviously everyone wants it to be a ‘full’ Toyota, that would be great. But I do think, being realistic, the way emissions have gone, the way car manufacturing has gone, it would be very difficult to do that. The only way was to do a joint venture. And in fairness, BMW has done some very, very good straight-six turbo engines over the years, so it did make sense to go with them, to get the engine, and it has worked out really, really well. After driving the new A90, I though it was fantastic, BMW bits or not.”

The BMW bits are certainly controversial, but at least you can’t really spot them from the outside. The new A90 Supra sits in the Mondello pitlane, almost lurking under its matte-grey paint finish. That A90 badge isn’t merely me being pernickity about internal Toyota model codes, this is actually an A90 Special Edition model.

Somehow, some way, little old Ireland managed to nab this one. It wears 192-D plates and always will."

Okay, so all that signifies is that this one has the grey paint, the red leather interior, and some other small styling add-ons, but it’s one of only 90 that will be built this way. Globally. Apparently big markets, such as the UK, Germany, and France, all lobbied Toyota head office to get all 90 limited editions to sell, but somehow, some way, little old Ireland managed to nab this one. It wears 192-D plates and always will.

How significant is that? Well, to someone who’s not a Supra nut, probably not much, but consider this - the first A90, the first Supra production model in fact - VIN code 20201; year 2020, production number 1, was sold at auction in the US in June for $2.1 million (€1.9 million). All of that went to charity, thankfully, but you can see the sheer anticipation and excitement for a relatively compact Japanese sports car.

Well, now it’s in Ireland. You can’t buy this A90 version, that will remain the property of Toyota Ireland for a while yet. You can buy a ‘regular’ Supra for €81,260 but apparently no-one has. Toyota Ireland’s order book is currently full of requests for the more expensive GR Supra Premium model which retails at €84,335.

Worth it? Well, that’s arguable. You can get yourself into a V8-engined Ford Mustang for considerably less cash than that, and the ‘Stang has more power, makes more noise, and has at least vaguely useable back seats (the Supra is strictly a two-seater). Even a BMW Z4 convertible, with the same 340hp inline-six engine, is less expensive to buy, and has a more prestigious badge on its nose.

Yet the Supra weaves a curious kind of magic. It manages to look a little cartoonish, and yet quite subtle at the same time. The cabin is full of obvious BMW carry-over parts, but never quite looks like a BMW clone. The engine is basically a BMW unit, but with some Toyota software, but it does feel a little different in its responses, and its sound, to a BMW straight-six. It also manages to feel as if it has more than 340hp. Toyota once told massive porkie-pies about its Supra power outputs in the 1990s, and I suspect it might be doing so again. 100km/h comes up in just 4.3 seconds, and the Supra never feels anything less than electrically alert to your power requests, belying its turbocharged nature.

It is surprisingly soft, though. The body rolls more than you’d expect, on the top of its springs, and while the steering is laser-accurate, it’s not quite as full of feel and feedback as you’d like it to be. Nonetheless, around the tight confines of Mondello, it’s enormous, outrageous fun. A quick blast with the stability control switched off shows that it will happily drift just like its 1990s progenitor, but when you turn the electronics back on, they don’t stomp on your fun. Rather, the various sub-systems work with you to make the Supra seem faster still, more precise yet. It’s probably a better road car than a track car, but then the track is the only place where you’ll really be able to let that mighty engine off the leash and truly hear it sing.

Some 23 years ago, when I flattened the throttle of the A80 up the M3 slip road, I though time was turning back, so violently did that Supra accelerate. The new Supra isn’t quite so monstrous. Or, perhaps, my perception has changed since those more youthful days. Even so, it’s monstrously good fun, and proof that Toyota can do more - so much more - than sensible hybrids and school-run SUVs.