Tesla gets ‘moderate’ grade for its driver assistance software 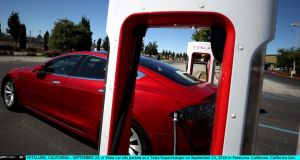 Tesla has often been in the safety firing line for over-hyping and over-selling its driver assistance systems. Photograph: Justin Sullivan/Getty Images

YouTube videos of drivers asleep behind the wheel as their so-called self-driving car plots a course between the white lines is hardly a great advert for motoring safety in general. Indeed, the marketing efforts of car makers to describe and sell their new suites of electronic driver aids have caused something of a storm of controversy, as car buyers and owners get caught up in the hype, and actually take systems called AutoPilot at face value. What then generally occurs is panel damage or, at the worst, injuries or even fatalities.

To try and help clear up some of the confusion over driver assistance systems (none of which are in any way capable of actually driving the car without human intervention and supervision, no matter what some twerp on the internet tells you), Euro NCAP, the independent crash-testing and vehicle safety organisation, has launched a new assessment that deals directly with these electronic assistants.

The new Euro NCAP ratings make clear that what they’re looking for is not the outright performance of the system, but the balance it strikes between its ability to take some control of the car’s steering and braking, and how good it is at keeping the driver alert, informed, and part of the process. The car’s other safety systems, the ones that react when a hazard is detected, are also part of the assessment.

According to Euro NCAP’s latest tests: “Three cars in the premium segment – the Mercedes-Benz GLE, the BMW 3 Series and the Audi Q8 – are graded “Very Good”, achieving a good balance between offering a high level of driving assistance but keeping the driver engaged and in control of the driving task. They also provide a good crash avoidance backup system and respond appropriately if the driver becomes incapacitated while the car is in assistance mode.”

Two more affordable models – the Renault Clio and the Peugeot 2008 – were given an “Entry Grade” each, with Euro NCAP saying that “while they lack the sophistication of the more advanced systems tested, they provide a relatively modest level of assistance, ensuring that the driver is not disengaged from the driving task”.

The Volkswagen Passat, Nissan Juke, and Volvo V60 were all given a “Moderate Grade” which suggests that they’re good but not great, while Ford’s new Kuga fared best of the non-premium brand products, with a “Good Grade”, with Euro NCAP saying that it “demonstrates that well-balanced, advanced systems are also available on mainstream mid-class vehicles”.

What about Tesla, though? The oft-controversial US electric car maker has often been in the safety firing line for over-hyping and over-selling its driver assistance systems, and has been accused of being misleading in claims made for its so-called Autopilot system in a German court ruling.

According to Euro NCAP, the Tesla Model 3 gets a “Moderate Grade”, with the assessors saying that its driver assistance system “does little to keep the driver engaged. Its distinct steering strategy gives the impression that either the car is driving itself or the driver has full control, and the system is more authoritarian than co-operative.”

Euro NCAP did note that Tesla’s over-the-air software updates mean that such things can be changed and fixed relatively quickly, and did praise the car maker for that.

Dr Michiel van Ratingen, Euro NCAP secretary general, told The Irish Times: “Assisted driving technologies offer enormous benefits by reducing fatigue and encouraging safe driving. However, manufacturers must ensure that assisted driving technology does not increase the amount of harm incurred by drivers or other road users compared to conventional driving. The best systems offer a balance between the amount of assistance they provide and the level of driver engagement – and should be supported.”