Puma proves Ford’s heart is in the right place

Sacred name, not taken in vain: enormous fun wrapped in a compact package

Ford's compact crossover impressed on its pre-coronavirus European launch and, now we get the chance to test it on Irish roads, this Puma is possibly a better driver's car than its Focus sibling. The best so far this year? Video: Neil Briscoe 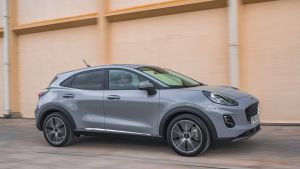 In 1997, those pulsing Lalo Schifrin bass chords rang out, and onto our screens swept the sin-bleached split-screen views of San Francisco. Those of us movie-and-car literate enough to know braced ourselves for a repeat viewing of Steve McQueen’s classic cop movie Bullitt – a film featuring a near-total lack of action outside of the famed ten-minute car chase.

But no… Heralded by the jangling theme music, into vision swept Ford’s new Puma, a cute-and-perky Fiesta-based coupe. The advert, which featured a digital Steve McQueen rather deftly inserted into the Puma’s driving seat (look it up – it’s really impressive considering the state of late-nineties special effects) triggered a wave of huge enthusiasm for the Puma, backed up by the fact that its Fiesta-based chassis made it gloriously entertaining to drive.

Fast forward 23 years and here’s another Puma. Once again, it’s based on the Fiesta (enthusiasts cheer) but this time around, instead of a coupe, it’s a five-door SUV (enthusiasts sharp intake of breath). A crossover? Bearing the legendary name of Puma? Steve McQueen would surely not approve.

Well, frankly, who cares? McQueen was not a nice person – go and check out any of the numerous biographies – and in any case, the car market has moved on. The sad fact is that if Ford had launched Puma 2.0 as a coupe, it would likely have garnered huge critical praise, but sold almost none at all. For a Ford Motor Company teetering recently on the brink of more than one financial abyss, that would not have been much help.

So the Puma is a small crossover, hitherto a class of car for which we’ve not been able to raise much enthusiasm. Generally built-down to a price, and far more concerned with style than substance, they have mostly been the nadir of the current car market. Bought by many, but for reasons we critics could not fathom.

That has changed of late. Cars such as the new Peugeot 2008, and even the flawed-but-generally-competent Renault Captur have raised the bar a touch. It’s a bar that this new Puma effortlessly, Dick Fosbury-like, vaults over.

The styling is, I guess, a little mixed. At the front there is the current Ford family face, but one stretched upwards into something of a grin, with faint hints of the old fifties Austin-Healy “Frogeye” Sprite about it. Around the back, it actually gets a little better, with a low-slung belt-line that thankfully resists the current trend for ever-rising, wedge-like profiles. It’s very colour sensitive (blue is good, white rather less so) but overall kinda cute.

Inside, it’s a Fiesta. Well, obviously it’s bigger. The Puma is 200mm longer than its hatchback progenitor, and 70mm wider. That makes it usefully roomy, rather than hugely spacious, but there’s just enough in there for a growing family to make good use of. The boot is genuinely impressive – with as much as 468-litres of space under the luggage cover, and the clever “MegaBox” storage under the floor. This is maybe a little less clever than Ford touts it – it is, after all, just an extra storage area – but it’s designed to be hosed out (so you can store muddy boots or wet sports gear) and the extra height means that the Puma can carry tall, upright items such as, let’s say rubber plants (or, of course, the inevitable golf clubs).

The rest of the cabin is as-per the Fiesta. Lots of dark, uninspiring plastic, but it’s all well bolted together. The SYNC3 touch-screen is good, without being overly-flashy, and the Recaro bucket seats of our ST-Line X test car are grippy and huggy, but without being too constrictive for your husky correspondent. Rather pleasingly, at a time when automatic gearboxes are becoming almost tiresomely ubiquitous, this one has a six-speed manual, although sadly it’s not topped with a solid ball of aluminium, as was that of the original Puma. It would have been a nice touch, alas.

Power comes from a mild-hybrid version of Ford’s familiar 1.0-litre EcoBoost three-cylinder petrol engine. It gets a proper 48-volt electrical system (unlike some who try to pawn you off with a 12-volt) and Ford says that it can improve overall fuel economy by nine per cent (mostly by running the stop-start system more efficiently around town) and can add a little extra torque when accelerating.

It works rather well – the extra torque makes this little engine feel rather beefier than usual, but our economy worked out only in the low-6.0-litres per 100km region. Fine, but not exceptional. Then again, that could have been the way we were driving…

You see the thing that really does connect new Puma with old Puma is fun. Absolute, unadulterated, driving fun. That starts with the steering, which has truly remarkable feel and feedback for a modern, electrically-assisted steering setup. It’s almost like good old-fashioned hydraulic steering, so much does it constantly tell you about what’s happening at the front wheels. Allied to that is firm, lightly springy, suspension that keeps body movements under control, and allows you to fully exploit the Puma’s steering and the solid mid-range of that 1.0 engine through corners. It is zippy, agile (yet sure-footed thanks to a longer wheelbase and wider track than that of the Fiesta), and enormously entertaining. It is a car with the power to shock, in some way – mostly because it’s shocking how used we have become to cars with inert steering and flabby chassis. The only major shortcoming is that the stiff springing means that on poor road surfaces, there’s too much bounciness going on, to the point of car-sickness in some passengers.

Never mind them, though – you’ll be having too much fun. McQueen might be Number One with a Bullitt, but the Puma shoots straight to the top of our 2020 charts.