Dacia unveils what might be Ireland’s cheapest electric car 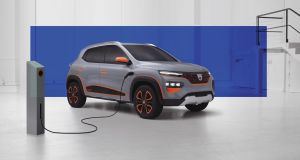 Dacia has used the virtual space of the non-existent Geneva motor show to reveal this, the Spring electric crossover, which is promised to be Europe’s most affordable electric vehicle (EV).

Well, it’s most affordable electric car, to be precise, as Dacia — even with its expertise in low-cost cars, is unlikely to be able to bring the Spring in at less than the price of the Renault Twizy. But then, of course, the Twizy is not strictly speaking a car.

Style-wise, the Spring sparks a new design language for Dacia, albeit one that doesn’t stray too far from the simple and blocky styling of the current Sandero and Duster. The new ultra-slim LED headlights make for a slightly more modern face, although it remains to be seen how precisely the styling of this concept model will make it through to production reality. There are also new full LED rear lights, which form a ‘double-y’ shape which the company says will become its new lighting signature. Well, at least you’ll be able to spot one at night.

You can also pretty obviously tell from the shape that the Spring is based heavily on the Renault City KZ-E small crossover, which is already on sale in China. That model comes with a 26.8kWh battery, but only a 33kW electric motor — just shy of 50hp. It’s likely that, for Europe, that both battery and motor will be given a significant upgrade.

That’s it on the detail front for now, although Dacia has still not confirmed right-hand drive production for the Spring. We know that it will go on sale in Europe in 2021, but Dacia says that at the start it will concentrate on marketing the Spring to ride-sharing and car-sharing schemes, so we may have to wait a while longer before you can buy one, here, as a private customer.