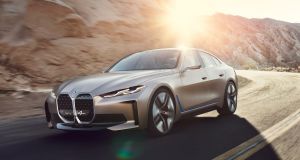 This BMW’s i4 Concept, the final preview of its 2021 Tesla-rivalling four-door coupe. Now, this is a vehicle with only the thinnest sheen of concept car lacquer atop what is, basically, a production-ready model that goes on sale early next year. And, for a kick-off, we have to talk about the nose…

I kind of love it. I mean, it’s going to be divisive as all get-out, and I can think of a solid half-a-dozen colleagues who will hate me for it, but I reckon that the ‘prominent, blanked-off kidney grille’ as BMW puts it, actually looks rather good, certainly within the context of the overall shape and lines of the rest of the i4. (Confession — I’m also a fan of the current Land Rover Discovery’s offset number plate and love the original Fiat Multipla — don’t @ me.) It’s also not, technically, a grille at all, but rather what BMW calls an “intelligence panel” — behind it lurk sensors for the car’s electronic driver aids.

Clearly, it’s going to be a discussion point, that grille, but the rest of the i4 both looks and sounds rather impressive. It has a low, lithe, four-door coupe shape that looks like a very natural evolution of the current 4 Series Gran Coupe. Inside, and thanks in part to the packaging advantages of the electric powertrain, BMW claims that it boasts “not only a high level of practicality, but also a much larger interior than the car’s dynamic proportions would suggest.”

“The BMW Concept i4 brings electrification to the core of the BMW brand,” says Adrian van Hooydonk, BMW’s head of design. “The design is dynamic, clean and elegant. In short: a perfect BMW that happens to be zero emission.”

Brown is a brave colour for a concept car, but the i4 kind of pulls it off with the Frozen Light Copper paint, which has delicate dark blue highlights that are meant to connect it, spiritually, to the ground-breaking i3 and i8.

Performance should be deeply impressive. BMW isn’t talking production specifics yet, but the Concept i4 boasts 530hp, does 0-100km/h in 4.0secs, and can go for around 600km on a full charge. Inside, there’s a huge, curved, touchscreen dashboard which is designed, in part, to wrap around the driver in the fashion of classic 1980s BMW interiors. That said, we can’t see it as anything but a miss-step for BMW to boast that: “Almost all operating functions – even the climate control – are integrated into the BMW Curved Display as part of an overall approach centred on reducing the number of controls to the minimum.” Physical buttons still have value, BMW. Hopefully that will be reflected in the production i4. There are some physical controls — notably the toggle-style gear selector and the iDrive controller, some of which are finished with enjoyably tacky crystal elements. The displays are also made of non-reflective glass, which eliminates the need for a clunky hood to shade the glass.

The seats are covered with a combination of microfibre and leather which has been tanned using olive leaf, to reduce its environmental impact. The cabin is also has LED mood lighting, which pulses, animates, and changes colour depending on whether the driver has selected one of the car’s three modes — Core, Sport, or Efficient.

Hilariously, BMW also says that it has collaborated with famed composer Hans Zimmer (he of Gladiator and Batman Begins fame) to create an ‘acoustic flavour’ for the i4, including sounds that accompany the opening of doors, or the starting up of the powertrain.

On a more serious technological note, the i4’s battery pack has a total power capacity of 80kWh — which is quite small, considering the performance and range on offer, and suggest that the car has some trick lightweight structures and aerodynamics at work to help maximise that performance. Indeed, the company hints at this by noting that the rear structure of the i4 requires special machinery, at a cost of €200-million, to be installed in the factory in Munich.