Motoring’s Oscars will be announced next week. Here’s who I’ll be casting my vote for 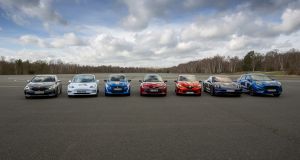 It’s time once more for the motoring equivalent of the Oscars, the prestigious Car of the Year award, and the seven finalists have gone through the final testing session.

Marking its 57th year, the awards are judged by a panel of 60 motoring journalists from across Europe, who this year made their call on a list of over 30 new models arriving on the market this year.

Unlike some other awards, Europe’s Car of the Year is independent of the car manufacturers and demands no entry fee from them.

And it’s also a public affair where not only are the jury members’ scores for each car public but their opinions on each are also published when the winner is announced on Monday, March 2nd.

After various test sessions putting the cars through their paces both on road and in private tracks where braking systems, cornering and active safety systems are tested, including a week-long test in a remote area of northern Denmark, the final seven were brought to the Ceram test facility north of Paris last week for final trials before jury members scurried away to mull over their final scores.

As one of those tasked with casting a vote, here’s my take on the final seven.

After the lacklustre EcoSport, the Blue Oval brand desperately needed a proper small crossover if it was to win sales in this key segment of the market. Thankfully for Ford the Puma does just that. Its sharp handling reminds us why Ford’s chassis engineers are still regarded as the elite in the automotive world.

There’s also some neat little practical tricks incorporated in the car like an 80-litre underfloor boot lined with hardened plastic for dirtier items that also has a drain plug so you can wash it out and let the water run out on the ground below. In terms of the engine line-up, the three-cylinder is a little small for this car, and while it is offered with a mild hybrid system, that’s not enough to stand out in the current crowd of finalists.

The new Clio may not look that radically different on the outside, but there has been a radical overhaul of the interior to bring it into the 21st century. At the same time all decisions on the car were made with the final price in mind. To deliver this level of modern functionality without adding thousands to the price is an admirable achievement.

And there’s a proper hybrid version as well, one that Renault claims will prove very useful for urban motorists. The hybrid always starts in electric mode, can manage a few kilometres in full electric mode and ultimately deliver an average fuel economy of 4.5 l/100km (62.7 mpg). It’s all very impressive, but in terms of new superminis on the market its French rival, the Peugeot 208 just has an edge over it.

The styling is eye-catching and the cabin layout follows on from the format adopted in the rest of the range to much critical acclaim. Again a strong focus on costs didn’t result in any corners being cut. It looks good and drives well. And the big news in the current climate is the inclusion of an all-electric variant. Peugeot claims a range of 340km on a single full charge, but in reality that’s likely to be in the mid-200km in everyday motoring. That’s useable in a small supermini and with a price of just under €28,000, it seems like a good buy, particularly if you listen to Peugeot boss Jean-Philippe Imparato, who says the residuals on these electric models will be higher than their petrol equivalents in the years to come.

My gripe is that, with the focus on keeping the price down, making a profit, and maximising range, they’ve left out the surge of torque and acceleration we’ve come to love in electric cars. The electric model drives like an ordinary petrol or diesel 208, only a lot cleaner when it comes to emissions. I just wish it had the electric pace and the brakes were not as biting, dialling in the ABS too early for my liking.

No electric or hybrid yet, so what’s the story with this premium hatchback on the final list for Car of the Year? Well it’s simply down to its incredible driving fun. The 1 Series was always a bit of an also-ran in the BMW range, too cramped in the cabin for a family hatchback and burdened with a premium price that many considered simply down to the badge on the bonnet. When BMW decided to opt for front-wheel drive for this model it caused consternation amongst aficionados, while it reassured the naysayers that the 1 Series wasn’t really a BMW at all.

Yet the BMW engineers have pulled off a masterstroke with this car. They learned lessons from the front-wheel drive electric i3 model on how to smoothly transfer a sudden surge of power through the front wheels without all the usual torque steer that makes driving many powerful front-wheel drive cars akin to holding on to the lead of a hungry Great Dane in a butcher shop.

The end result is a car that’s more spacious than before and arguably one of the best reflections of BMW’s tagline “pure driving pleasure” in its range. In fact, it puts BMWs at three or four times its price to shame.

You get what you pay for, and Porsche paid a fortune for this. The sports car brand has invested €6 billion over three years on its electric car strategy. To put that in perspective, the total Irish government expenditure on the transport sector – roads, rail, marine and aviation – this year will be €2.3 billion.

In return for its money Porsche got an electric marvel. Incredibly fast, this car defies the laws of physics in the bends. It effortlessly flits through a series of bends at speeds that seem like the rest of the world is frozen in time. It makes the most mediocre driver seem like Lewis Hamilton. And then there’s the build quality, which is exceptional (Tesla take note). The word during development was that Porsche were being ridiculously fastidious about this car. If true, then that trait has really paid off. There is, however, a whopping six figure problem with this car and that’s the price. Only the extremely well-heeled will get the chance to do their bit to halt climate change with this car.

I so wanted to give this car my top score. It is fast, exciting and innovative, leaving rivals in its wake. The company has taken on the motoring establishment and kicked it up the ass.

As for the Model 3, I’m not a big fan of the styling but it’s incredible fun. And there are tonnes of toys – from fart sounds to retro arcade games – to keep your inner teenage geek enthralled. You can even watch Netflix and YouTube while your parked. You get a top class supercharging network to get you about. And it can be incredible fun to drive. The acceleration is just what I love about electric cars.

More good news from behind the wheel, where steering is much sharper than on any Tesla to date. The ride quality is still choppy on Irish country roads, but it’s not any worse than its electric rivals.

But niggling issues abound. Build quality is a real issue we encountered in our test car, something basic that needs to be put right, particularly on a car costing €48,000-plus even after the taxpayer gives buyers their generous grants.

With Tesla falling into second place, it fell upon the Corolla to take top spot. Hybrid has become a catch-all for all sorts of claims these days, but the Toyota system is the best of the bunch and it is now housed in a family car that’s the best to carry the Corolla name that I can remember.

It’s hardly sporty. And the new 2-litre engine is simply not selling in any great numbers. Yet this Corolla is the best version of the car Toyota has ever made. The hybrid system can still be noisy when pushed and the engine can whine, but it is much smoother than the brand’s other hybrids or those from rivals.

The fit and finish is also vastly better than the Toyota hatchbacks of old. And dynamically it’s really capable through the bends, and smooth over the rough and tumble of rural Irish roads. As an all-rounder it’s hard to beat, and while we wait for a proper recharging network to roll out across our island, this is arguably the most sensible way for motorists to get their initial electric buzz.

Claire Byrne: ‘My parents had to stand by the bed while I got the last rites’