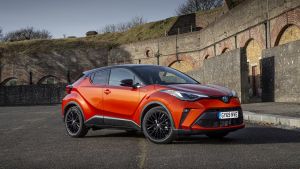 The Toyota C-HR, which starts at €30,620, offers stylish looks and a premium finish

Have you bought into the idea of “self-charging” cars? It sounds like alchemy, yet the advertising claim made about non-plug-in petrol-electric hybrids technically stands up to scrutiny, if you consider that at its heart the system works largely the same as a bicycle dynamo. The simple truth is that it taps into unused energy from the activities of the car.

What it is not, however, is another term for an electric car. Yet that’s seemingly what a lot of buyers believe, and its this interpretation which has got the goat of many in the motor trade. They are up in arms over the booming sales in hybrids compared to the relatively lacklustre take-up of fully-electric cars.

Suffice to say that hybrids have caught the Irish public’s attention. January new car registrations show that while the overall market fell 3.46 per cent to 31,251, new hybrid registrations rose by 92.3 per cent to 4,241. In comparison, the sale of fully electric cars seem quite modest: January registrations of fully-electric new cars were 898, up 12.4 per cent.

It has led to a degree of finger-pointing by advocates for fully electric models, and claims that consumers are over-estimating the role of electric power in hybrid cars. Advocates of hybrids say neither the public – nor the public infrastructure – are ready for a mass move to full electric any time soon.

As with everything in life, reality lies somewhere in the middle. Depending on where you are driving, these cars are as likely to be reliant on the engine as electric power. But there are also large numbers of consumers who would struggle to live with fully electric cars, given the limited reliable charging network at present – not to mention the initial price of those cars. For these buyers, particularly in rural Ireland, full electric is simply not in the frame. The decision is between hybrid or diesel.

In terms of the electric capability of hybrids, let’s take the face-lifted Toyota C-HR we were testing as an example. Over a mix of short commutes and a few motorway runs, we managed to average a fuel economy figure of 5.8l/100km – or 48.7mpg in old money. That’s respectable for a car in this class, but it’s hardly going to save the planet. The official claimed fuel economy is 4.8l/100km (58.9mpg): still not the sort of figures to impress Greta Thunberg.

The official claimed fuel economy is 4.8l/100km (58.9mpg): still not the sort of figures to impress Greta Thunberg.

Yet there were zero-emission high points in my time in the C-HR hybrid. I managed to spend 80 per cent of one trip in full electric mode, according to the car’s new driving data monitor. True, it was in heavy traffic over a distance of less than 5km, during which I was barely tickling the accelerator. If the purpose of Toyota’s new system providing live data on your electric driving is to lighten your right foot, then job done.

In contrast, on a longer 60km trip that mixed motorway and national roads the percentage of time I spent in electric mode slipped back to 23 per cent. And no, I wasn’t driving it like I stole it. In fact, I was being particularly conscious about being gentle with the acceleration, a trait you have to adapt to get the benefits from a hybrid. In the main I found that the mid-40 per cent range was my average score.

But of course chasing percentages is a bit of a fallacy. If you sit in traffic on the M50 for over an hour and only spend 20 minutes actually moving, then of course the percentage time in full-electric mode is going to be high. But then that’s where thousands of commuting motorists find themselves regularly, stuck in crawling traffic with little need for a large diesel engine. Should they go electric? Without confidence in the recharging network – or the cash in the bank – they are delaying the move to full-electric for now, and that’s where hybrid is making its mark on Irish motoring.

I have to admit to being a fan of this car since its introduction back in 2016. And my opinion of it has only improved over time. It has really aged well.

So to the car to hand, the updated C-HR. I have to admit to being a fan of this car since its introduction back in 2016. And my opinion of it has only improved over time. It has really aged well.

True, the sloping rear roof and the thick rear pillar makes the rear seem cramped, more so than it is actually. And it is clearly not the car for a family of five, probably better suited to empty nesters.

Yet where it excels is in the overall quality of the offering. It’s a proper premium crossover from a mainstream brand. This car could easily carry the Lexus badge rather than the proletarian Toyota one.

So what’s new about this updated C-HR? Well, very little on the aesthetic front. The biggest news is probably the addition of a new 2-litre petrol engine to the hybrid range, putting out 184bhp and 190Nm of torque with emissions of 119g/km and fuel economy of 5.2l/100km. However, the test car was the smaller 1.8l engine putting out 122bhp and 142Nm.

The latest Toyota hybrid systems are a lot smoother than in the past and don’t send the petrol engine into high rev apoplexy when you kick down the throttle, in the way previous Prius models used to do. The transmission is also much better at managing the mix of electric and petrol power than before.

My gripe with this C-HR is that the chassis seems capable of taking much more power than what’s on offer right now. And the true potential of Toyota’s hybrid system is better exemplified in the new Corolla. And that’s the rub. If we can get over our crossover fixation, the Corolla is practically a better buy than the C-HR – and at a lower price. It also handles its hybrid underpinnings with more finesse. That’s why it is one of the seven finalists in this year’s prestigious Car of the Year award, choosing the best new car out there right now.

The Toyota line is that the latest hybrids are now for everyone – as good on a trip to Kerry as a short hop to Tesco. From my experience they really reap rewards around town, but offer you the reassurance of petrol engine support when you need to travel farther afield. There’s also a much wider choice in the hybrid market than in the fully electric one. But they are not the panacea some would make out. There are still times when you’d be better in a diesel, while if you are only pootling around town then a fully electric car should really work for you just as well.

Our best advice for those confused about the leap towards electric and considering hybrid is to dip your toe with a proper test drive. Ask the dealer if you can test your potential hybrid purchase over a route you take regularly and see how it compares with your current diesel car in terms of total fuel consumption. That will give you a good indicator on what potential savings you can make.

And of course, any choice should also take account of driving fun. With mainstream hybrids, you do need to change your driving style to get the most out of them, and that can dent the driving pleasure. In contrast, fully electric cars can be enormous fun to drive. But they are still, for now, impractical to buy for many. And that’s why hybrid is, with all the focus on economy and emissions these days, a valid halfway house on the road to electric.

Power 1.8-litre petrol engine combined with a 53kW electric motor, which together delivers 122bhp and 142Nm of torque

Verdict Stylish looks and premium finish with a hybrid flavour that will suit some – but why not opt for a Corolla instead?