This is a chunky compact saloon car and, compared with Mercedes CLA, the 2GC looks frumpy 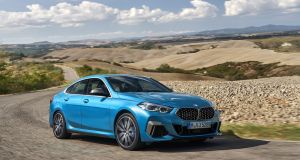 The mainstream saloon may be under threat from the tide of crossovers sweeping across the leafy suburbs’ driveways, but there is a niche that still seems to have some life left: the four-door coupe.

It’s debatable who can be credited with the latest wave of interest in this format, but certainly the first generation of the Mercedes-Benz CLS deserves some of the kudos. Others have followed the three-pointed star and brought the idea to smaller, more affordable models.

Now comes BMW’s latest take on the format, the new 2 Series Gran Coupe. Don’t be misled by the naming convention, however, for this car isn’t really a coupe, nor is it that “gran”.

The smallest BMW gran coupe version joins BMW’s handsome 4 and 8 series gran coupes and should be a beauty, but sadly there is little family resemblance. The 2GC is at best a chunky compact saloon car. Compared to its main rival, the Mercedes-Benz CLA four door coupe, the 2GC looks frumpy. For example, the large kidney grille and the bonnet could easily be attached to a crossover or SUV. The rear of the car is tall with the 430 litre boot’s lid a good distance from the rear wheel arch. Really BMW you should have called the car a notchback or just the 2 Series saloon.

Under its skin is the same floor plan as the 5 door MINI, the new 1 Series hatchback and the X2, so there is good cabin width, ample space up front and room for a couple of modest sized adults in the rear.

In the back I had some knee room, 33mm more than in the 2 Series Coupe. Sadly my 5ft 10in frame was pretty much braced-in with my head contacting the roof lining – maybe the car is more coupe like after all.

The dash is really well appointed and there is a premium feel to it. Voice connectivity features and is activated by saying “Hey BMW”. These systems can be hit and miss but thankfully manual controls can also be used when the driver and machine are not on the same frequency. “Hey BMW, do you know the Five Lamps?”

We tested two models on a variety of roads, an M235i xDrive petrol and a 220d diesel with front-wheel drive. BMW has fitted clever electronics first used in its i3 electric car as standard in the Gran Coupe to help reduce wheel spin from the driven wheels when cornering. Near actuator wheel slip limitation technology (ARB) works hand in hand with the car’s DTC (dynamic traction control) to reduce under-steer when accelerating hard.

The 220d’s four-cylinder engine has ample power going to the front wheels through a very smooth eight-speed automatic gearbox. The 2GC feels assured, composed and quiet on a variety of surfaces. On damp tarmac we were able to drive with a greater degree of confidence than in a rear-wheel drive car.

Our M Sport trimmed car felt neutral and delivered a premium feel through its chunky steering wheel. When cornered with gusto the car will gently run wider as traction is lost. A slight lift off the power cures this under-steer and tightens up the line again. In contrast, a rear-wheel drive in the same scenario will tend to try to swap ends.

The 190hp/400nm 220d can sprint from a standstill to 100km/h in 7.5 seconds and delivers more power than we felt the car needed. Motorways are cruised with ease. The GC’s driving experience was impressive and class leading. Eventually a more humble 216d will expand the diesel offering.

The turbo-charged 2-litre four-cylinder M235i is an M Performance model. While not a full M car, it is not far off in terms of power and performance. The xDrive intelligent all-wheel drive car rides on M Sport suspension, has a Torsen limited slip differential on the front axle and comes with launch control for rapid getaways. The clever diff delivers maximum torque in first and second gear.

The 306hp/450nm M235i is rapid and engaging but it’s not as raw or outrageous as a BMW M2 coupe. There are selectable driving modes of comfort, eco pro and of course sport. In sport mode the suspension stiffens, the throttle response quickens, the steering weights up and the engine burbles, you can even get the odd parp from its active exhaust on downshifts. The horizon comes close very quickly in a civilised and composed way due to the traction and grip the xDrive system delivers. The sprint from 0-100km/h takes just 4.9 seconds and top speed is limited to 250km/h.

Cornering is assured but, oddly, we kind of lost interest in exploring its dynamic ability rather early in the test drive. At one stage an M2 passed us and we ended up following it, with very little effort, singing its praises over our test car. The M235i is a lot of fun but, perhaps, a car more suited to other markets. A perfectly adequate three-cylinder 1.5-litre petrol-powered 218i GC will be the entry model in Ireland.

The 2 Series Gran Coupe grades are Sport and M Sport with the M235i topping the range at €52,220. There are no plans for a plug-in hybrid (PHEV) or EV version, although a mild hybrid system (8v) will feature at some date.

Overall, our first impressions are that the brand new BMW 2 Series Gran Coupe bears little resemblance to a coupe and is barely convincing as a sleek premium saloon. In that regard the rival Mercedes CLA has the lead. And against the 3 Series it also comes out second best.

It does have price as an advantage, starting at €9,000 less than the 3 Series saloon. However, it never really managed to dissuade us from sticking to our guns on our current favourite buy for 2020, the car that topped The Irish Times Top 100 list this year, the BMW 3 Series saloon.