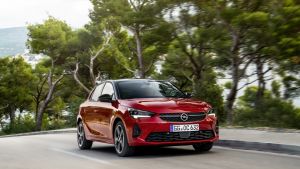 The new Corsa may lack in star quality, but it does not put a foot wrong in any major way

A long time ago in what now feels like a galaxy far, far away, Opel was Ireland’s top-selling car brand, and the Corsa was everywhere. Since the nameplate was first introduced in 1982, more than 13 million Corsas have been sold in Europe, and Corsa ownership makes up a significant proportion of the 100,000-odd Opels still knocking around on Irish roads.

Boy, have we moved on since then. Opel now languishes at 16th in the Irish sales charts, and we now, apparently, all buy SUVs and crossovers. Have both the brand and the model become irrelevant?

Certainly, I think we came close to that. Although updated in 2011 and 2014, the previous Corsa was essentially left to wither on the vine by Opel’s previous owners General Motors. In reality the old Corsa was first introduced in 2006, and that meant that it was feeling incredibly creaky and old by the time 2020 was hoving into view.

Now that GM has abandoned Europe and sold Opel to the French PSA Group (also owners of Peugeot and Citroen), the Corsa has a new chance at life, and it arrives feeling far more bang up to date. It shares a chassis and engines with the new Peugeot 208, has shed 108kg in weight (as an average across the range) and in a couple of months there is even going to be an all-electric version.

That Corsa-e will likely cost around €27,500 after grants and rebates have been factored in, but the regular petrol-engined range kicks off with a €17,975 1.2-litre version with 75hp. That is a high-ish price for a small hatch, but Opel compensates for that with decent standard equipment.

There will be just the three trims, plus an automatic option for the higher-power engined, as Opel wants to slim down the lineup and make it easier for buyers to choose what they want.

Apparently when PSA took over at Opel and went in to see what work had been done on engineering a new Corsa, the French bosses were shocked at what they found. They immediately ordered a complete turnaround to move the Corsa to a platform-share with the Peugeot, and give the car a complete re-style.

That re-style has worked inasmuch as the new Corsa looks neat, purposeful and inoffensive. It is nowhere near as enticing to the eye as the sharply-styled 208, but perhaps that’s the point – let the fashionable types go for the Peugeot while the more self-effacing buyers might find themselves happier in a Corsa.

That is also reflected on the inside. The Peugeot has an almost all-digital cockpit and that controversial tiny steering wheel. The Corsa has a much more traditional interior, with analogue dials and separate physical controls for such as the heating and ventilation system. A little staid, perhaps? Yes, but also much, much easier to use on the move, and with impressive quality.

If the Corsa’s interior has not made as big a leap forward as it has in terms of powertrain and styling, then it is at least comfy, well-made and reasonably roomy (with a 309-litre boot) in there.

Our test car was in SRI trim, and looked appropriately chunky in its bright orange paint with a contrasting black roof.

The 1.2-litre 100hp turbo petrol engine (Opel expects all but a third of Corsa buyers to go for petrol power) is unusually well-judged for a car of this size. The 100hp, and the useful 205Nm of torque, means that you have more than enough oomph to keep up with rushing motorway traffic, and the Corsa feels eager and responsive on tighter, twistier roads.

It also has a pleasing three-cylinder tremolo song when you rev it, but fuel economy should be fine. We averaged just over 6.0-litres per 100km, and closer to 5.0l/100km should be easily achieved if you take things a little easier.

The SRI Corsa encourages you not to take things easy, but not overly so. Its chassis settings are a little stiffer than standard, and its steering weights up nicely when you activate Sport mode, but you would struggle to call it a true drivers’ car. Instead it’s agile, reasonably engaging, and dynamically well-sorted even if the ride quality can feel a touch too firm at times. Not out-and-out fun, then, but pleasing enough.

The Corsa kinda feels like a safe-bet sort of car, lacking perhaps in star quality but equally not actually putting a foot wrong in any major way.

It is, in that sense, possibly ideal for a brand seeking to re-establish itself and build a new relationship with Irish car-buyers.

Even amid the unseemly scramble for SUVs and crossovers there is still lots of good sense in a small, frugal, relatively affordable hatchback, and this new Corsa feels more sensible than most.

Verdict: A solid return to form for Opel’s small hatch. More like this, please.