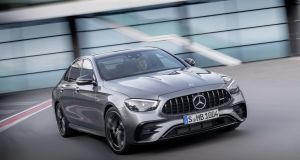 The new Mercedes-Benz E-Class gets revised styling at the front, with a broader, more pronounced radiator grille that takes inspiration from the likes of the CLA and CLS four-door coupes

With the roll out of new cars and concepts taking place regardless of the lack of an actual, physical, Geneva motor show today (thank you, Covid-19) there’s a lot of new metal to discuss. So we’ve decided to break down all of the major debuts into two categories. Here, we will be dealing with the cars that will actually go on sale and, crucially, that you might actually be able to afford, in a real-world sense. For supercars, hypercars, and wacky concept ideas, head over to our other feature, cars that you can’t or won’t buy.

Surely king of the realistic show debuts is the Skoda Octavia RS. The new-generation Octavia has already been revealed and goes on sale this summer, but the RS version is an important halo model. It’s a strong seller in Ireland, even if not in especially large numbers, and actually generally out-sells the related VW Golf GTI here.

This time around, the Octavia RS will be available in three models — diesel, petrol, and this new plugin-hybrid iV version. Using the same basic hardware as the just-launched Superb iV plugin-hybrid, the part-electric RS develops a robust 245hp, boasts a 0-100km/h time of 7.3 seconds, and can run for more than 50km on electric power only from one charge of its battery. CO2 emissions are pegged at around 30g/km, which will make this one of the most affordable performance cars, ever, to tax for a year. As ever, it will be available as both a fastback saloon and an estate.

Of course, it will face stiff competition from within the VW Group, not least in the shape of the new VW Golf GTI, which is also being launched today into the non-Geneva cyberspace. As with the Octavia RS, there will be three distinct GT models of the Golf. The traditional petrol-powered GTI rolls up with 245hp for now, but with the promise of a much more powerful 300hp Clubsport version in the offing. The GTD sporty diesel model gets one last go from VW, this time with a 200hp four-cylinder diesel engine (VW describes it as an ‘endurance athlete’) and there’s the latest GTE plugin-hybrid, which uses the same 245hp petrol/electric setup as the Skoda.

Across the virtual hall, Seat too is showing off the hot versions of the new Leon, which will be sold with Cupra, rather than Seat, badges. Cupra Leons will get the same petrol, plugin, and diesel options as the Golf, but there will be a range-topping 310hp version with four-wheel drive, which will (initially, anyway) be sold only as an estate. Expect to see lots of those in the UK as plain-clothes traffic police cars…

Speaking of compact, front-drive models from VW Group brands, there’s also the new Audi A3 to discuss. As with the Golf 8 (and the Octavia, and the Leon) the differences between this new one and the outgoing model are, under the skin, pretty minimal. In fact, Audi will actually launch the new A3 in May with only three engine options — a 1.5 turbo petrol and two 2.0-litre TDI diesels, with no mention of plugins nor even the mild-hybrid options already being offered by the Golf.

Clearly, Ingolstadt hopes that the new A3’s sharper styling (bigger grille, LED lights, more prominent wheelarches) and an updated interior (a new ten-inch touchscreen and standard digital dials) will distract you and you won’t notice that it’s basically the same as before.

Alongside its striking i4 concept electric car (which will go on sale in 2021, and which we’ve covered in more depth HERE) BMW is showing off some part-electric cars that you really might buy, and which we — frankly — really want to. The headline act is the new M340d xDrive, which combines 355hp diesel thump with the relative saintliness of mild-hybrid tech to bring down its emissions around town. Also being shown are new versions of the impressive plugin-hybrid 330e, including, for the first time, xDrive four-wheel drive models and a 330e Touring estate.

Speaking of Cupra, Seat’s performance brand is also showing off its new 245hp plugin-hybrid Formentor sporty SUV, which is the first Cupra-only model (as in, it’s not a re-badged Seat). It looks handsome and practical, and might be the first model that allows us to make proper sense of Seat’s spinoff.

Honda’s Civic Type-R is also getting an official update today, with a choice of a new, more subtle version with a smaller rear wing and toned-down bodykit, or an even-more hardcore Limited Edition with a stripped-out cabin to save weight, and trackday-spec brakes and suspension.

Hyundai has brought along both an entirely new i20 small hatch, and a facelifted version of the i30, which each get sharper, more angular styling than we’ve seen from Hyundai of late, and which create more of a bridge between these conventional models and the likes of the Kona. Both get a mild-hybrid engine option for the 1.0-litre turbo petrol, and the i30 gets upgrades including new digital instruments.

We’ve always had a soft-spot for Kia’s big Sorento SUV, and there’s a new model being launched, which takes clear inspiration from the US-market-only Telluride. It’s big, bluff, and quite handsome, with a really high-quality interior. Initially it’ll come with the same 2.2 diesel as before, but there’s a plugin-hybrid model coming down the tracks too.

Of huge significance is the new Mercedes-Benz E-Class, the updated and facelifted version of which is being shown off today. The E-Class gets revised styling at the front, with a broader, more pronounced radiator grille that takes inspiration from the likes of the CLA and CLS four-door coupes. The big interior screens for both infotainment and instruments now come as standard (base models used to get old-hat analogue dials), while in the engine lineup there are now no fewer than seven plugin-hybrid — both petrol and diesel — from which to choose. Aside from those, the 48-volt EQ Boost mild-hybrid system will spread to more models in the E-Class range. The hot AMG versions are get updated styling, including the bigger, slatted ‘Panamericana’ radiator grille. Expect a slight rise in prices when the revised E-Class goes on sale this summer.

Volkswagen has also shown off a car which you will almost certainly want to buy, but can’t quite yet. In the #NotGeneva2020 cyberspace, it’s showing off the new ID.4 electric SUV — basically the equivalent of an electric Tiguan, and based on the same mechanical package as the incoming ID.3 electric hatchback.

The ID.4 is being shown in a light camouflage wrap, but basically what you can see here is how the family crossover will look when it arrives in dealerships some time in 2021. VW promises that, like the ID.3, not only will it have zero exhaust emissions, but that it will be built using carbon-neutral methods in the factory. Maximum range will be 500km, if you go for the most expensive model, with more like 300km available from a basic version. Rear-wheel drive ID.4s will launch first, followed by four-wheel drive models.

It’s not the only electric SUV that VW is showing off today — there’s also the new Touareg R, which  is a new plugin-hybrid range-topper for VW. Basically it borrows the V6 petrol plugin-hybrid powertrain from the Porsche Cayenne to make 462hp, but with an electric-only range of as much as 50km. It’ll probably be hugely expensive, though, so maybe we should have put this one in the Cars You Can’t Or Won’t Buy story…