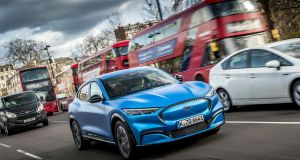 Ford may seem to be idling in neutral when it comes ot sales right now, but it’s all in preparation for a planned surge into the electric car market.

The blue oval brand showcased its new Mustang Mach-E electric SUV at an event in the centre of London recently.

We took a brief spin in the zero emissions Mustang Mach-E around the city’s clogged streets. Contrary to rumour the Mustang is not a VW I.D.3 underneath but a genuine Ford.

The Mach-E is a global car that will be built in Mexico and is due later this year. Our Mustang test car was still part pre-production test “mule” and part finished car, so it lacked the final finishes and materials that will be used in the European offering.

The car was still fresh from Ford’s Lommel proving grounds and even had its huge red emergency stop button, a la Father Ted’s slurry truck.

Given the location of the test drive, we were not able to explore its dynamic performance, although we did experience its rapid acceleration in an underground car park under the watchful eyes of Ford engineers.

The standard Mach-E produces 337hp and 565nm of torque. A high powered GT model delivers 465hp/830nm and can sprint from 0-100km/h in under 5 seconds. Our car managed just a few seconds of rapid acceleration before we had to hit the brakes - always preferable to hitting the car park’s wall.

The Mach-E’s is similar in size to a Kuga and there is seating for five, while its suspension, steering weight, electronic stability control and all-wheel drive settings have been tuned for more demanding European tastes.

The springs and shock absorbers are unique to European models too and reflect the need for enhanced cornering ability and high speed autobahn use. Ford’s MangaRide adaptive suspension features on the GT. Special Brembo brakes feature.

The car weighs from just under two tonnes, depending on the battery and electric motor combination used. Rear wheel drive and all wheel drive (twin motor) versions will be available. A 77.5kWh lithium-ion battery is standard, with a long range 98.8kWh battery available too. The battery pack can take a 150kW DC (rapid) charge. There are three drive modes with ridiculous names: whisper, engage and unbridled.

Range anxiety should not be an issue with a claimed 600km available (WLTP) from a full charge with the extended range version. Ford says 85 per cent of buyers will choose the larger battery option.

Ted Cannis, global director of Ford’s electric vehicles told The Irish Times the company is happy to work with expert suppliers like LG for battery tech with Mach-E, but would not disclose the maker of its electric motors.

Ford plans to launch 18 new electrified vehicles by the end of 2021, and 14 by the end of this year. That’s a massive launch programme and the company says its best selling electrified models of Focus, Fiesta and Kuga alone could save its European customers €30 million in fuel use per year.

Ford is also investing in 1,000 Ford-site charging points, IONITY (Ford is a shareholder and founder member of the group) and FordPass (easy charger billing) charging networks to encourage electrification growth.