First drive in the new Honda e impresses, even with a limited range 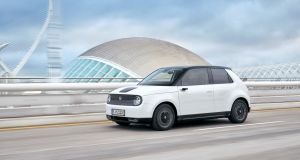 The Honda e is incredibly fun to drive, however it does have limitations and luggage space is poor as the boot only holds 171 litres

Of the fleet of fully electric cars heading our way, Honda’s little e is undoubtedly the cutest. Somehow the Japanese car brand has managed to deliver a cool little compact concept car all the way to production.

So what was a motor show styling concept that made cynical motoring hacks swoon when it first appeared several years ago, has made it all the way to the road. And we are still smitten by its looks.

Despite being relatively late to launch the car on the market – and it will still likely be early 2021 before Irish buyers get delivery in any significant numbers – Honda is committed to an electric future.

And for all its looks, Honda has opted for a limited range of 222km, citing the fact this four-seater hatchback car is aimed at urban users with average daily commutes of less than 40km.

Inside the cabin is a technological showcase. Five digital displays stretch across the full width of the dash. Connectivity is impressive too with Honda’s integrated artificial intelligence at its core.

By saying “Okay Honda” you can interact to a greater degree than many of the current crop of voice activation systems in premium brands. It also boasts as standard a side camera monitoring system (SCMS) instead of conventional side mirrors.

Tiny rearward facing TV cameras with a water- and dirt-repellent coating capture high-definition views of the world behind and beside the car. Inside the camera images are displayed on a pair of well-placed 6-inch monitors, ironically the size of side mirrors, at either end of the dashboard.

Audi was first to the market with this type of camera tech with its e-tron crossover, but only as a costly option and even then the displays were poorly placed.

Again here, the system is an option but unlike the Audi it’s one that works well and is worth considering. A regular rearview mirror is standard.

The big news, however, aside from its looks, is its driving dynamics. The Honda e has perfect 50/50 weight distribution and rear-wheel drive.

The Honda e is built on a new platform and emerged from the 2017 concept Urban EV.

The e is similar in size to a Suzuki Swift and is more compact than most in the supermini class. Unlike most other superminis, however, the Honda e boasts fully independent McPherson strut suspension all round.

However, it does have limitations and luggage space is poor as the boot only holds 171 litres. Fold the seats and the cargo space improves to 861 litres. Two adults can fit in the back at a squeeze.

The rear-mounted DC motor develops 136hp in standard form or 154hp in the ‘Advance’ grade. The Honda e weighs in at 1,514kg and pulls itself along nicely thanks to the motor developing an impressive 315nm of torque.

Overall the little Honda feels quite quick, even thought the 0-100km/h sprint takes 9 seconds (8.3 seconds for the 154hp version). WLTP battery range is quoted at 222km.

However, the upcoming new electric Mini that arrives in Irish showrooms in the coming months is both faster and has better range. The front-wheel drive Mini Electric (€27,764 net) does 0-100km/h at 7.3 seconds with a top speed of 150km/h.

MINI electric’s range from its 32.6kWh battery is similar at 235km. Honda’s rechargeable battery has a 35.5kWh usable capacity and comes with a 6.6kWh AC on board charger. Charging time from zero to full capacity takes 4.1 hours at a 7.4kW charger.

Charging to 80 per cent takes 30 minutes at a 100kW CCS fast charger or 31 minutes at a 50kW fast charger. Water cooling prolongs battery life and the Honda e has the ability to heat or cool the battery relative to the ambient temperature. Active cooling, for example, allows more frequent rapid DC charging.

Cute styling and a high-tech interior can only get you so far but Honda e has a party trick that makes it a joy to use in tight urban spaces. As the car is rear-wheel drive, the front wheels only have to steer.

And as the front wheel arches don’t have to accommodate drive shafts and other gubbins, this leaves lots of space for wheel movement within the arches of up to 50 degrees. The Honda e uses variable geared steering that is wonderfully fluid and precise. It has a tiny turning radius of 4.3m (4.6m radius at the body). The steering requires just 3.1 turns to go from full lock to full lock.

The Honda e is incredibly manoeuvrable and parking is a doddle. It is also tremendous fun to nip about in. On the road the Honda e is a hoot and in sport mode delivers torque in a more urgent way. The independent rear suspension and rear-wheel drive makes cornering really fun. Exiting corners is a lot of fun and motorway work is effortless.

There is no doubt that the biggest issues with this Honda will be the limited range and the as-yet to be announced price. For price, Honda is indicating a starting price of below €30,000 after grants, which is still quite high for a car of this size with a limited luggage compartment, cute and all as it is. And the higher powered 154bhp version is expected to cost significantly more.

The Honda e’s 222km maximum range is anxiety inducing for rural commuters. And during times of spirited driving, we were less than economical consuming up to 23kW per 100km, which would mean we would struggle to get above 150km if we kept driving like that.

When the pricing is finalised and we have a better idea of its arrival date, then we can better judge the impact it will have in driving Ireland’s electric car market. For now we can confirm that it’s as much fun to drive as it is to look at.