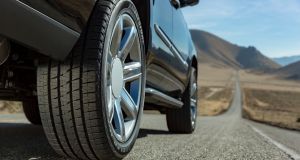 Bridgestone has plans to install a computer chip in its tyres that will communicate with a car’s on-board electronic safety systems, feeding them data about the condition and performance levels of the rubber

Tyres are so often overlooked that our ignorance of our contact patches has become both a cliché and an all-too-common NCT failure point. We should be checking our tyre pressures and tread depth on a regular basis. We should do but, all too often, all too many of us don’t.

Bridgestone, the gigantic Japanese tyre-maker, has plans to circumvent foolish, careless humans, and install a computer chip in its tyres that will communicate with a car’s on-board electronic safety systems, feeding them data about the condition and performance levels of the rubber.

The technology was shown off recently at the Consumer Electronics Show in Las Vegas, and works like this. A wireless sensor is glued to the inside of the tyre. The fact that it’s glued is actually critical, because as the tyre rotates and compresses under load, the sensor monitors the amount by which the glue moves and deforms. That information gives the sensor an idea of how much stress and strain the tyre is under, and by comparing that data against a ‘digital twin’ of the tyre, embedded into the sensor’s memory, it can make estimates about tyre wear and overall condition.

This is especially useful because modern car safety systems don’t really know what’s happening at the tyre’s contact patch. Systems such as autonomous emergency braking, or stability control, or anti-lock brakes, simply make their decisions, and issue their electronic instructions to the car’s brakes, steering, and throttle, without thinking much about how worn, damaged, or otherwise the tyres might be. Rather like us flawed humans, these ADAS (Advanced Driver Assistance Systems) computers simply assume that the tyres will cope with what’s needed.

Bridgestone’s idea is to finesse that decision making process. If the car’s ADAS setup can be fed live information about what sort of state the tyres are in, then they can make better decisions about how to deploy braking or steering systems to either help a driver regain control, or to slam on the anchors to avoid an accident.

Presumably, the sensor could also send a message to the car’s on-board systems warning the driver when the tread depth is becoming too shallow (although, given our habits, one wonders if we might treat that message rather like a ‘printer ink low’ warning, and assume there’s enough left for now…), Beyond that, Bridgestone suggests that the same sensor could also measure how much the tyre is deflecting because of the road surface, essentially turning your car into a pothole detector - information that could be automatically shared is local authorities and county councils to provide live updates on which roads need attention next.

There are questions yet to be answered. Such as how the tyre’s chip communicates with the rest of the car (raising data access and privacy concerns). Equally, there will be further privacy concerns over who owns and has access to the data generated by the tyre, not least because it would also be able to provide a highly-accurate and time-stamped readout of the speeds at which the car has been travelling. Finally, of course, there’s price - a factor which Bridgestone says will be a ‘negligible increase’ for a conventional tyre.

Right now, the connected sensor is a prototype, and Bridgestone hasn’t even yet begun durability tests on the adhesive that would hold it in place (which after all has to last for as much as five years in some cases). Still, though - in the future your tyres might finally be able to break through our ignorance barrier, by talking directly to our cars themselves.