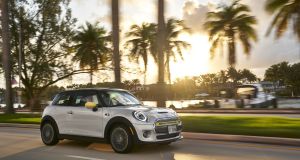 An electric Mini always made sense. Yet only now is the popular premium small car brand officially joining the electric charge with a new all-electric model, due to land in Ireland in March.

The BMW sub-brand was an early advocate of electric power, trialling a fully electric version back in 2008. However, it was greeted with mixed reviews, due to the space limitations of the large battery pack that reduced the bootspace to a glorified stowage bin.

The lessons learned during the Mini trials contributed to the development of one of the most innovative cars on the market: the BMW i3. Now it is Mini’s turn to reap the rewards, with some of the technical advances of the i3 now shared on this new electric version of the retro-styled suburban favourite.

Yet this is not just a redressed i3. For a start, the Mini retains a front wheel drive format, as with the rest of the Oxford-built range, in contrast to the i3’s rear wheel drive set up. That means the electric motor is up front, taking up the space normally filled by the petrol or diesel engine.

According to Elena Eder, project manager for Mini electric, key criteria for the project was that the electric Mini would retain the same driving dynamics and character as the rest of the Mini range.

That was a problem with the 2008 test car: it was just too heavy. This time they’ve got the recipe right. Along with the mix of electric surge that delivers 0-100km/h in 7.3 seconds and a power output of 184hp with 270Nm of torque, the lithium-ion battery pack doesn’t anchor the car to the road.

Bizarrely for a car that has built its name for nimble cornering prowess, our designated test route on the launch included barely any bends. But even with the very limited time we had threading the car through turns, it felt as easy and fun to drive as the rest of the Mini range. That should be a given, of course, for the beauty of electric cars is that the battery can be stowed under the floor of the car.

By moving the heaviest single element lower to the ground it means the centre of gravity is also much lower than on a regular car, where the big weight is stuck up front, over the front axle. It doesn’t take a Nobel prize in engineering to realise that a better weight distribution and a lower centre of gravity in a car leads to far better handling. And for a car that has built its reputation on a heritage of nimble motoring the move to electric power is clearly a godsend.

So what are this car’s limitations? Well, it’s only really down to the all-important range. The new Mini claims it can complete between 235 and 270km on a full charge of its 32.6kW battery pack. During our test drive, that included a significant time on the motorway, we averaged 7.2km per kWh, which would have delivered us a range close to 230km.

Project manager Eder says that’s within the usage range of most Mini owners these days. It’s a fine balance between providing a battery big enough to deliver a decent range and one that just adds weight to the car. Eder says the engineers spent a lot of time studying the average usage range of Mini owners and believe they have got the balance right. After all, most buyers will be suburban commuters. That’s also why the top speed is limited to 150km/h.

On a 7.2Kw home charger, it takes just over four hours for a full charge from zero to 100 per cent, and on public fast chargers it will get from zero to 80 per cent in about 40 minutes.

You can help to extend the range of the battery by choosing between high or low brake regeneration modes. Chosen by a toggle switch in the central console, in low regeneration mode the Mini operates like a regular car, coasting along if you don’t touch the brakes when you lift off the accelerator. There is a degree of regeneration which slows the car, but it’s barely noticeable.

Engage higher regeneration mode, however, and the car noticeably slows once you lift off the throttle, meaning you can often drive the car with just one pedal.

As to the styling, the differences between the regular and electric Mini versions are relatively subtle. There’s the solid front grill for a start, a new style of optional wheel trim and a few green badges, but that’s about it. And it’s still surprisingly practical for a small car. The electric Mini has a decent boot, offering 211 litres in the regular format, extending to a 731 litres with the rear seats down. That’s the same as the regular Mini three-door models. And as with the regular Mini range, we managed to get two adults in the back row as well without any complaints, although getting in and out remains a bit of a chore.

The new Mini Electric comes with Cooper S specification, and prices start at €27,764 after the VRT rebate and SEAI grant are taken into account. That’s less than the equivalent petrol Cooper S – €30,273 for a three-door Classic Cooper S automatic – and a tempting price point for a car whose retro-styling remains a hit for many motorists. For some, the range will make it an impractical proposition if you regularly trek across the country, but for most suburban motorists it seems like a very well-priced premium car, perfectly in tune with the public’s demand for electric alternatives.

With no sacrifices in terms of space or driving pleasure, electric power in the Mini seems like a pretty ideal marriage, and while the range may not set new standards in battery tech, the price is certainly appealing enough to make it the preferred version for most of Ireland’s Mini buyers.