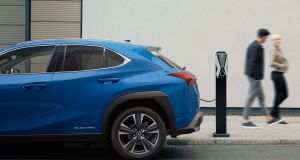 Hybrids now account for 63% of Toyota sales in western and central Europe.

In the age of electric Toyota believes it has the edge over rivals that will see it through one of the biggest revolutions in the automotive sector since Karl Benz’s missus left her horse in the stable and travelled from Mannheim to Pforzheim on a petrol-powered carriage.

While petrol-electric hybrids have been regarded as merely a stepping stone to a fully electric future, Toyota sees things very differently. Instead those later formats are merely hybrids with bigger batteries.

Hybrids now account for 63 per cent of Toyota sales in western and central Europe, and 96 per cent of Lexus sales. And as one of the few European markets where the brand is a market leader, the Irish operation is exceeding those figures, with hybrids accounting for 77.6 per cent of Toyota passenger car sales last year, and 86 per cent so far this year.

Toyota is moving towards plug-in power as well. A new plug-in hybrid version of the Rav4 is due for sale here later this year, capable of running on electric power only for 65km before reverting to hybrid mode. That full electric range exceeds what’s on offer from rivals.

Following on from this, a new all-electric version of the small Lexus crossover, the UX, is due for sale in Ireland early next year, offering a maximum range between charges of 300km. That’s less than several mainstream rivals, but Lexus executives claims it’s within the usage needs of many urban buyers.

Toyota has a global target of selling 5.5 million hybrid vehicles per year by 2025 and about 1 million fully electric vehicles by 2030.

According to Matt Harrison, executive vice president of Toyota Motor Europe, that will mean 25 new or updated hybrids – including plug-in variants – and at least 10 fully electric vehicles coming our way over the next five years.

And it doesn’t end there: Toyota is committed to a long-term hydrogen future for vehicle transport, particularly for larger vehicles, such as buses and trucks. The company recently entered into a collaboration with Portuguese bus manufacturer Caetano to build hydrogen fuel-cell city buses.

The big benefit of hydrogen power is that it offers zero emissions from electric motors that get their energy from fuel cells, which convert hydrogen to electric energy. For towns and cities increasingly worried about air quality, swapping their dirty diesel bus fleets for vehicles with zero emissions could make a big difference.

One of the big benefits for operators is that refuelling can be done in a matter of minutes, similar to a diesel vehicle at present, with a similar range of several hundred kilometres. For bus and haulier companies that make money from their vehicles when the wheels are moving, hydrogen offers a more viable alternative than electric battery power, which requires vehicles to be parked up recharging for several hours every day.

A major hurdle to hydrogen’s adoption remains the high cost of the vehicles along with the hefty investment required to install filling station infrastructure, estimated at about €1 million per hydrogen refuelling pump at present. However, like most areas of the environmental debate, great hope is being placed on advances in engineering and technology to reduce these costs in the near future.

For now the commitment to hybrid is driving the Japanese company’s agenda. Amid warnings that governments are setting unrealistic targets for fully electric car sales, with plans to ban petrol and diesel sales by 2030, Toyota Ireland’s boss, Steve Tormey, said politicians are not giving enough credit to the contribution regular hybrids make to lowering emissions.

Toyota has confirmed it will build a new small crossover, based on the same underpinnings of its new Yaris. Smaller than the current C-HR, it will take on the likes of the VW T-Cross, Renault Captur and Skoda Kamiq.

While there are few details as yet on the new model, including no word on its name as yet, it will undoubtedly share the same powertrain options as the upcoming Yaris, due in Irish showrooms from June.

That means power is likely to come from Toyota’s new 1.5-litre three-cylinder petrol-electric hybrid set-up putting out 115bhp and will feature a version of the all-wheel drive set-up adopted on the new Rav4 . The car will be targeted at European consumers and built at the company’s production plant in France.