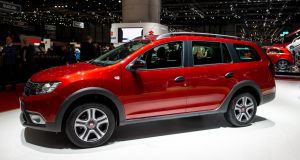 The Dacia Logan is not, normally, a car with very much to recommend it. Still, it has one major thing going for it, and that’s practicality

It has always seemed odd to me that the peak car-buying season in Ireland coincides so neatly with the peak season of post-Christmas abstinence. While you might save a few euro while you’re losing a few pounds, shunning the chocolate aisle is unlikely to claw back the cost of a new car.

With that in mind, then, here’s a list of the best-value new cars on sale right now (and please note; these are not necessarily the best cars around, but those that do a conspicuously good job for a conspicuously low, or at least good-value, price).

1. The one for cheap practicality

The Dacia Logan is not, normally, a car with very much to recommend it. It’s basically an estate version of the Sandero hatchback, and that means it’s very cheap, moderately cheerful, and not what you’d call a bundle of fun. Still, it has one major thing going for it, and that’s practicality. Based on a supermini-sized hatch it may be, but the estate Logan has a whopper of a boot - 573-litres behind the seats and beneath the load cover. That’s more than a BMW 3 Series Touring, for roughly a quarter of the price. For families on a budget, this is the ultimate ‘fire and forget’ car - simply open the rear hatch, fire in everything you need to carry, and forget about the Tetris-like game of squashing and squeezing everything in.

2. The one for cheap versatility

Citroen’s Berlingo has always been among the more cultured van-based MPVs. While some others show off their commercial origins rather too obviously, the Berlingo manages to disguise its van roots behind memories of utilitarian Citroens of old, such as the 2CV or the Mehari (or even the rival Renault 4). In other words, it’s a van with windows that feels a little less like a van than usual. It comes in a choice of two lengths, either 4.4-metres or 4.75-metres, and that crucial extra 350mm means that you can have the Berlingo as a seven-seater, or as a five-seat family wagon with an enormous 775-litres. Beyond the usual folding flat thing, the Berlingo also has what all growing families truly crave in a car - three individual rear seats, which means you can get three child car safety seats clipped in, side-by-side. That alone is enough to make it the most versatile choice, never mind the added 186-litres of cabin storage cubbies. It’s no ball of fire to drive, but in the fine French tradition, it’s softly-sprung, comfortable, and frugal if you get the 1.5 BlueHDI diesel engine.

3. The one for cheap common sense

The Skoda Octavia will shortly become larger, more luxurious, more technologically sophisticated, and a good bit more expensive. So it’s an ideal time, before the all-new version arrives, to get hold of an outgoing Octavia, which is still one of the very best all-rounders you can buy. Prices start from €22,025 right now and that will get you an Ambition model with the brilliant 1.0-litre TSI turbo petrol engine (an engine that matches with the Octavia’s chassis and deportment rather perfectly). It’s more spacious than an equivalent Golf, and undercuts its German Meister by around €2,000 at the base model point. It’s also rather delightful to drive, with comfortable suspension settings, and a sense of quiet confidence when cornering. Okay, so lots get used as taxi cabs, but there are good reasons for that - chiefly space and reliability. It’s not a car you’ll run out to on a Sunday morning, with wax and soft cloths in hand, but it is a car you will appreciate more and more as you drive it, own it, and uncover its all-round usefulness.

4. The one for cheap luxury

We have long scoffed at Ford’s Vignale effort. Reviving the name of a classic Italian design house, and slapping it on some chrome-laden Fords, in an effort to compete with the likes of BMW and Audi, just seemed like the height of folly, and certainly sales haven’t exactly been stellar. However, no-one appreciates the comfort of rich, Corinthian leather quite like us, so if you want to downsize your dimensions but upsize your luxury, you could do worse than a Ford Fiesta Vignale. For €23,064 (before discounts, one of which you’ll probably be able to argue for yourself), you get quilted leather upholstery, keyless entry and ignition, a special radiator grille, auto headlights and wipers, the famous, heated, ‘QuickClear’ windscreen, and - wait for it - chrome scuff-plates inside the doors. OK, so you’ll also have to deal with a depreciation curve that looks like a brick flung from a tall building, but on the upside you’ll have the Fiesta’s brilliantly-mannered chassis and sharp steering to entertain you on the way to yet anther rancorous meeting with your bank manager.

5. The one for cheap fun

Who knows how much longer we’ll be allowed to buy and drive a car such as the Mazda MX-5. Once, the world was replete with small, light, fun, affordable sports cars such as this. Now there is only the Mazda left standing, but it is at least making a brilliant last (if it is) stand. Forget your multiple-million Euro McLarens and Ferraris - the best fun you can have behind the wheel of a new-bought car is to get a basic MX-5 with the 1.5-litre engine, find an open road, and just let nature take its course. The combination of sharp steering and peachy chassis balance means that, no matter how fast or how slow you’ve been going, you’ll arrive at your destination with a smile on your face. How many modern cars can we say that about?

6. The one for the cheap SUV life

Sadly, the Fiat Panda 4x4 has disappeared, temporarily we hope, from Irish price lists, but we’re pretty sure that if you wander into your nearest Fiat dealer and ask nicely, one could be sourced for you, being as it’s still on sale in the UK.

Now, the tiny Panda doesn’t spring instantly to mind when one thinks of an SUV, but trust us - this is the one you actually want. With its tiny body, it’s easy to drive through the modern day 4x4’s natural environment - the city. It’s easy to park, cheap to run, and actually more roomy and spacious inside than you might expect. We once got a folded-up gazebo into a Panda. More importantly, this is not some poseur SUV; the Panda 4x4 is actually properly rugged and able to shrug off awful weather conditions with ease. It’ll also plug its way up muddy, rocky, forest trails, or across ploughed fields if that’s your thing. Plus, when the snow does come around again, and everyone is flailing around with gripless, front-wheel drive SUVS, you’ll sail on past, with one of the few true all-terrain vehicles around. Smugness is priceless, after all.

How much? Not on Irish price lists but circa €19,000 imported