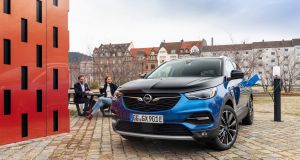 Europe’s fleet of low emission vehicles, made up of battery electric and plug in hybrid electric vehicles will exceed 3.5 million units by 2025. Opel wants a piece of that action.

That’s why its rolling out its ne Grandland X Hybrid4, a plug in hybrid version of its compact SUV. Under the skin the five seat Grandland X is a twin of the Peugeot 3008, with only slight differences to steering and suspension tuning for high speed autobahn use factored in. All of the hybrid bits and pieces are identical also.

The vehicle comes in the high grade ‘Elite’ trim, features all wheel drive capability for a premium price tag of over €55,000 before government incentives. Even with incentives of €7,500 taken in to account, €47,415 is still a heap of cash for a blue-collar Opel.

Under the bonnet is a 200hp four cylinder 1.6-litre turbo petrol engine. Also there you’ll find an odd shaped housing that is home to a 110hp electric motor and the car’s eight-speed automatic transmission.

At the rear there is a clever multilink suspended axle that incorporates a 113hp/166nm rear motor This delivers the all wheel drive capability and also powers the car most of the time in electric only mode.

Opel says that 80 per cent of daily trips are less than 50km and this is where plug in hybrids earn their keep. While you might be tempted to add all the horse power together the five seater’s combined output is 300hp with an impressive 520nm of torque. On the road the Hybrid4 is a bit of an animal and can really shift when provoked. Its power to weight ratio is the best in the Grandland X range at 6.3kgs per horse power (130hp auto petrol 8.3kgs/hp).

One fact that can’t be argued with is the hybrid’s green credentials with a sub 40g/km CO2 emission figure. As with all PHEVs users can drive in electric only mode (like an EV) or use the engine and save its battery power for use on demand at a later stage in a journey.

A fully charged Hybrid4’s 13.2kWh battery can deliver up to 59km of electric only driving in the AWD and surprisingly two kilometres less in the front wheel drive. This is due to the efficiency of the rear motor.

The assurance of a fossil fuel burning engine at its core and its 43 litre fuel tank helps remove all charger and range anxiety from the equation. In the selectable e-save mode on the centre touch screen drivers can choose to preserve 10 per cent, 20 per cent or the maximum battery charge. Opel points out that in the growing number of cities with zero-emissions zones, its small blue LED light housed in the front of the windscreen mirror will help authorities identify when the car is running in full EV mode. Depending on how often the car is used in EV mode annual fuel savings can be more than halved compared to the petrol only version.

The 13.6kWh battery an recharge on a 3.7kW home charger in four hours. Using an optional 7.4kW charger that drops to about two hours, while a regular three-pin plug socket will charge the battery overnight.

The Hybrid4’s battery pack is mounted under the rear seats and other hybrid bits impact on the underfloor boot space. The hybrid’s boot holds 390 litres while the standard car holds 514 litres. Fold the seats and there is 1,528 litres of cargo space.

Top speed is an autobahn friendly 235km/h and we easily managed to cruise in and around 200km/h with little fuss. Under battery power alone we experienced its top electric speed of 135km/h (using both motors). In electric mode the rear motor works alone up to 80km/h. There are four selectable drive modes: hybrid (the car selects what way to power the wheels), electric (mostly rear wheel drive), all wheel drive (up to 135km/h) and sport. The Hybrid4’s rear motor and differential are directly integrated in to the rear axle. In sport mode the Hybrid4 has great acceleration and is a real motorway mile muncher.

Opel is using the ‘free2move’ mobility brand, from parent PSA, to make charging more convenient with access to 125,000 charging points in Europe. The ‘myopel’ app features functions like the ability to see the state of charge of the car, access to its climate control to preheat the interior to 21 degrees while it is still plugged in and you can also set a time when the car charges to make use of cheaper electricity. There is also a handy trip planner that maximises charging opportunities along the way.

From the company that gave us the Ampera several years ago, this latest foray into the world of electric cars seems like a logical next step. It is part of a wider assault that will see an all-electric version of the new Corsa land in Ireland in the coming months. And by 2024 every Opel model will have an EV or PHEV version available. So Opel is determined to get a slice of the action the burgenoning electric car market. The Grandland X plug-in hybrid is a competitive first step, but the biggest hurdle it faces is the hefty price that might be too high a barrier for the average Opel buyer to overcome, even after the Government incentives.

Mary’s story: The Magdalene laundry survivor who still lives there